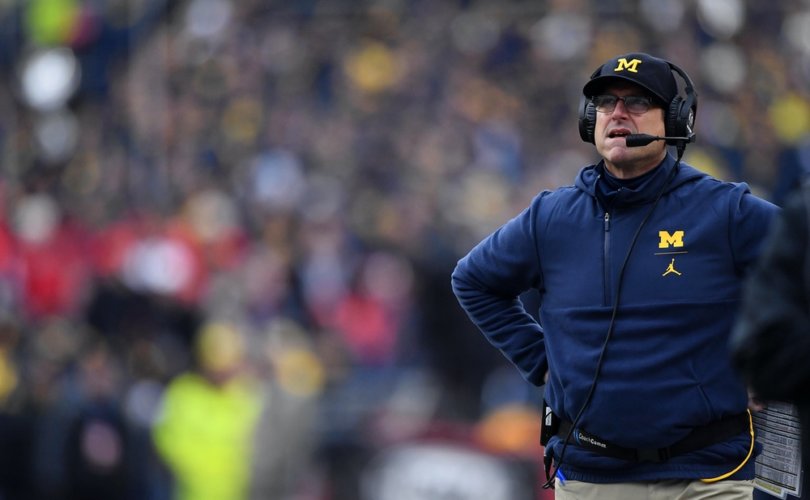 MICHIGAN, April 15, 2020 (LifeSiteNews) — University of Michigan football coach Jim Harbaugh decried abortion as the preeminent evil in America, stating in a recent interview that there “can’t be anything more horrendous” than the killing of children in the womb.

Harbaugh, who played in the National Football League for 14 years before taking up coaching in 2004, made his remarks in a podcast conversation with National Review senior editor Jay Nordlinger.

While the two men discussed football and Harbaugh’s career — which he began as quarterback for the University of Michigan — their conversation inevitably turned to the coronavirus pandemic, during which Harbaugh, a Catholic, brought up abortion.

“You see people taking more of a view of sanctity of life. And I hope that can continue. I hope it continues and not just in this time of crisis or pandemic,” he said.

“And lastly, abortion. We talk about [the] sanctity of life, and yet we live in a society that aborts babies. I mean, there can’t be anything more horrendous,” added Harbaugh, the father of seven children (three with his first wife, four with his second).

Harbaugh, 56, also observed that the pandemic is drawing Americans closer to God, as the country and much of the world lock down in an attempt to contain the virus, which originated in Wuhan, China.

“Even now, as we all go through what we’re going through with COVID-19, I see people more concerned about others. More prayerful,” Harbaugh said.

“As I said, God has virtually stopped the world from spinning. I don’t think it’s coincidence — my personal feeling, living a faith-based life, this is a message or this is something that should be a time where we grow in our faith, in reverence and respect for God.”

He described the generation he coaches now as more selfless than his own.

“I think this group, this younger generation, those in their teens and early 20s, they see more about the world as a whole and think less about themselves and more about the planet and the environment and others,” Harbaugh said.

“I have to honestly say much more than those of us who grew up in the ’80s. That era, that decade seems marked more by individualism.”

As all levels of government issue orders intended to stop the spread of the Wuhan virus, abortion, which has been legal in the United States for almost 50 years, has become a particular focal point of controversy.

U.S. Surgeon General Jerome Adams and the federal Centers for Disease Control (CDC) have advised healthcare facilities to reschedule non-urgent appointments and elective procedures, both to limit the spread of the coronavirus and to free up time and resources to focus on patients afflicted by the virus.

Some states, notably Texas and Alaska, have explicitly declared abortion an elective procedure and ordered abortion centers closed, while others, such as Florida, Massachusetts, Michigan, and New York are exempting abortion centers and allowing the killing of pre-born children to continue.

In the former case, the abortion lobby, led by Planned Parenthood, has sued to be allowed to remain open, a dispute that may soon reach the U.S. Supreme Court, as reported by LifeSite’s Calvin Freiburger.