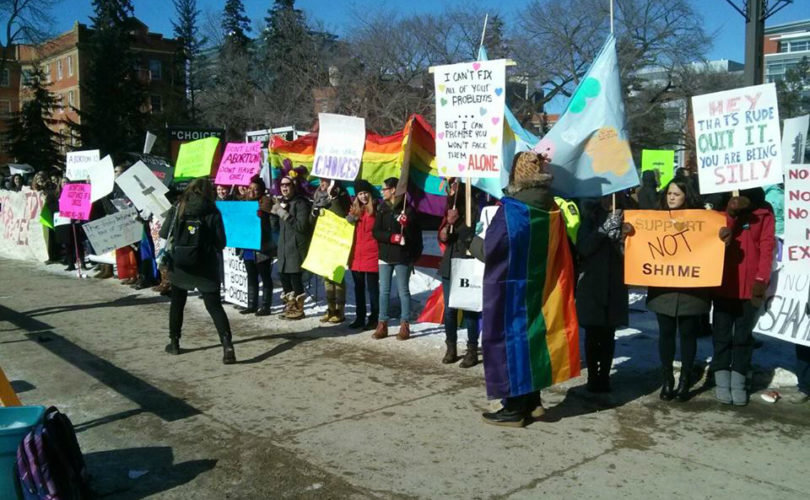 Pro-abortion protesters at the University of Alberta form a wall blocking a pro-life display on campus.Canadian Centre for Bioethical Reform

EDMONTON, Alberta, March 5, 2015 (LifeSiteNews.com) – The scene at the University of Alberta is disturbingly familiar to pro-life students in Canada. For the past two days campus security and local police have been passive bystanders as pro-abortion counter demonstrators have been allowed to block from public view a photo display of aborted and unborn babies.

“It’s exceptionally bad to see so little regard for freedom of expression. If both sides get to express their views we can have a discussion,” the president of the Go Life campus pro-life club, Amberlee Nicol, told LifeSiteNews. Nicol spoke from the display site via cell phone, as hostile demonstrators chanted,  “Whose Choice: my choice,” behind her. “When one side can prevent the other side from being heard, how does that help anybody?” she asked.

The blockaders, several dozen strong at any one time, use their own signs, sheets, and flags to prevent passersby from seeing the pro-life pictures, said Nicol.

It’s bad enough that students should trample on their fellow students’ rights, John Carpay of the Calgary-based Justice Centre for Constitutional Freedoms told LifeSiteNews. But it’s perhaps worse that the university does nothing.

After the first day of the two-day, pro-life demonstration, Carpay put out a news release that stated, “University of Alberta president Indira Samarasekera condones property damage, obstruction, and incitement to violate the Code of Student Behaviour.”

Carpay notes that university security were warned well in advance that several students used their Facebook pages to call for the blockade. “Whatever they did about it, if anything, clearly it wasn’t enough,” said Nicol.

Though campus security does not have the authority to arrest people or physically remove them, “they are not helpless. Universities are not helpless,” Carpay told LifeSiteNews. “The security do have the authority to ask for their ID or their names and addresses.” As well, they can call the police, as was done in Victoria, when pro-abortion demonstrators shouted down a debate about abortion last year. Shortly after they heard the police called, the pro-abortion hecklers left the building.

When opponents of a pro-life photo display at the University of British Columbia used Facebook to rally a counter-protest to prevent anyone seeing the pictures, said Carpay, campus security emailed them to say their action would bring disciplinary action. “They did not do the counter-protest,” said Carpay.

Carpay says the pro-abortion demonstrators are violating several provisions of the university’s conduct code, as well as the Criminal Code. The school code prohibits disruption of university events, but does not specifically include student demonstrations as events. The Criminal Code prohibits interference of a person in the enjoyment of his or her property, which Carpay says applies to students on campus who want to put on or to see a pro-life display.

Doesn’t free speech include the right to yell down free speech? “Any kindergarten child knows the difference,” Carpay responds, “between making a picture and wrecking someone else’s picture.”

The University of Alberta’s commitment to freedom of expression has not impressed campus pro-lifers, who have lost 3,000 posters to vandals in the past year, at least some torn down by university students who have bragged about it on Facebook without any disciplinary action.

Asked to comment on charges of university inaction, U of A media relations officer Michael Brown told LifeSiteNews that “a complaint has been made,” and therefore the university would be saying no more about the matter while the investigation continued. Nor, judging from today’s performance, will its security staff be defending the free speech of pro-life students.