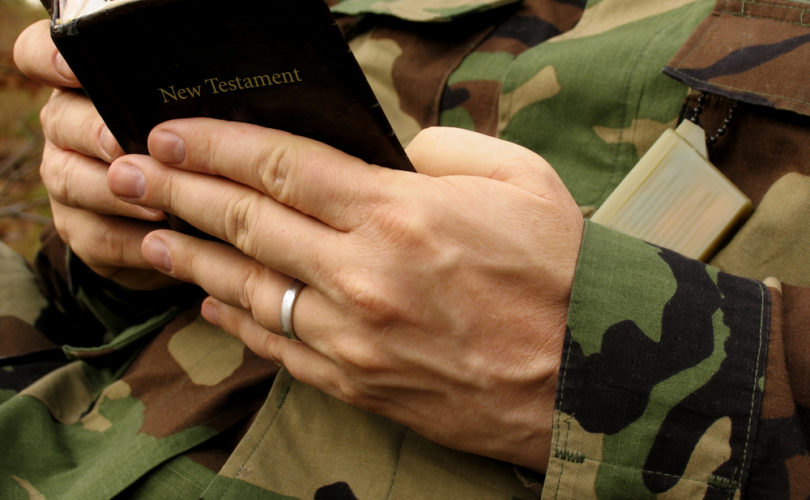 A U.S. military chaplain has been reprimanded for discussing Scripture while training troops in a class on suicide prevention, an action that observers say has was wide implications for the religious liberty of U.S. military personnel.

The disciplinary action was generated by a complaint from an outside atheist organization after a flyer from the seminar was posted to the group’s Facebook page by an Army Ranger attending the class.

“There was never a formal complaint from anyone inside the unit,” Colonel Ron Crews, executive director of Chaplain Alliance for Religious Liberty (CARL) told LifeSiteNews. “Instead he went outside the chain of command.”

Captain Joe Lawhorn was conducting the suicide prevention seminar November 20 for U.S. Army Rangers at the University of North Georgia, one of several regular annual classes for military personnel, Crews said, when he shared his personal experience with depression while he himself was an Army Ranger.

Lawhorn told the class he learned to overcome difficulty by following the example of King David from the Old Testament, a report by The Daily Signal said, upsetting the Military Association of Atheists and Freethinkers.

It was a week later that Lawhorn received an “administrative letter of concern” from Colonel David Fivecoat, commander of the Airborne and Ranger Training Brigade at Fort Benning, Ga.

“During this training, you advocated, or were perceived to advocate for Christianity and used Christian scripture and solutions,” Fivecoat said. “This is in direct contrast with Army Regulation 600-20 and violates the Army’s Equal Opportunity Policy.”

“As the battalion chaplain, you are entrusted with the emotional and spiritual wellbeing of the soldiers in the battalion,” Fivecoat continued. “You, above all others must be cognizant of the various beliefs held by diverse soldiers. During mandatory training briefings, it is imperative you create an environment of tolerance and understanding.”

The atheist group’s president said the source of the complaint is immaterial.

“This chaplain violated the privilege and responsibility he had and he exploited that opportunity to push his personal religious beliefs on the captive audience of military personnel,” Jason Torpy told The Daily Signal. “So it doesn’t matter where the complaint came from.”

Restrictions on religious freedom for military service personnel have been on the rise in recent years.

A chaplain was ordered last year to take down a post on his website titled after the famous 1954 quote by President Dwight Eisenhower that, “There are no atheists in foxholes.” The same year, the Pentagon issued a statement  saying that Christians in the military could be court-martialed for promoting their religious beliefs.

In 2012, a letter from the Catholic archbishop of the military opposing the HHS mandate was edited or barred from being read to Catholics in the military at Sunday Mass.

In Lawhorn’s case, the military emphasized that the suicide prevention class was a “non-religious briefing.” Fivecoat told Lawhorn in the letter that he “trusted Lawhorn would take the necessary steps” to ensure future briefings adhered to regulations and policy.

Lawhorn made it clear that he was providing his personal experiences dealing with depression to the Rangers in the class as one example among many alternatives, Crews said, and at no time did he say his was the only way of handling depression.

“In my view he did nothing wrong,” Crews told LifeSiteNews. “I think he was acting as a very good chaplain, being vulnerable with his soldiers.”

“I think he was exhibiting best practices for these kind of briefings,” he continued. “Being a Ranger, he’s been where they are.”

In addition to heading up CARL, Crews is also Lawhorn’s chaplain endorser for his particular religious denomination, which means he would have overseen Lawhorn’s admissibility as a military chaplain. Crews said he would be coming to Lawhorn’s defense either way. In addition to it being wrong for the chaplain to be written up, this case is the first of its kind, Crews said, with consequences across the military.

“My broader concern is what does this mean as a precedent,” he told LifeSiteNews. “For chaplains (conducting) training in the military.”

The Liberty Institute, a non-profit legal group, assisted Lawhorn in filing an official response to the Army on December 9.

Liberty Institute Senior Counsel Mike Berry said in a statement, “It is outrageous that an Army chaplain would have his career threatened because he cared so much about his soldiers that he opened up to them about his personal struggles and what worked for him.”

The “letter of concern” could have remained in Lawhorn’s file for up to three years, said Crews, but it will stay there for a year, with the expectation there will be no further violation on his part.

“That becomes a threat over him, that he has to be very careful,” Crews said. “It never should have been there in the first place.”

A number of people have written Colonel Fivecoat expressing concern, he said, and Crews encourages others to do so as well.

“The retired military are disappointed in the military right now for this action,” said Crews.

Contacting individual Congress members is also something else Crews recommends, as he will be reaching out to the House Armed Services Committee to address the incident from a policy standpoint. CARL is available to help people communicate, he said, either with their Congressional representative or military officers.

Legal action within the military is also not out of the realm of possibility. Whether or not this occurs is up to Lawhorn, who, along with his wife, remains upbeat and positive, according to Crews.

For his part, he’ll take the necessary and appropriate action to defend Lawhorn and his handling of the suicide prevention class.

“We want to defend religious freedom,” Crews said. “And we just want chaplains to be able to be chaplains in the military.”

Contact information for your Member of Congress is available here.