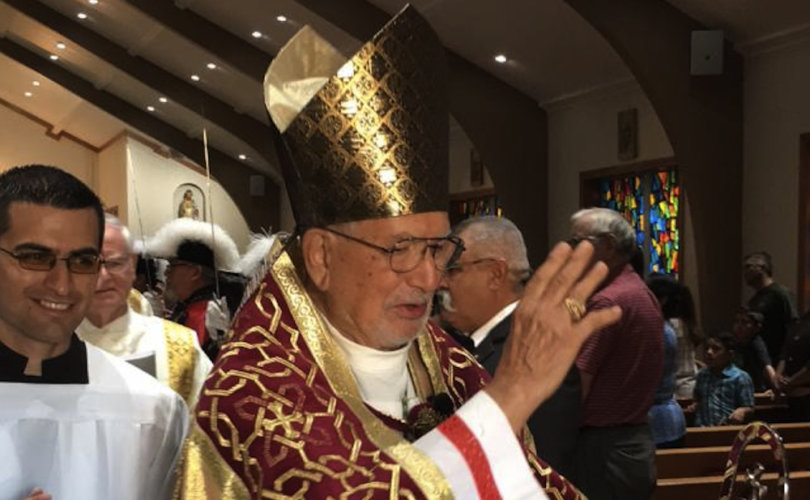 September 25, 2017 (LifeSiteNews) – A Catholic bishop in Texas added his name to a recent declaration that accuses the pope of propagating various heresies against the Catholic faith and seeks to correct them.

Rene Henry Gracida, Bishop Emeritus of the Diocese of Corpus Christi, posted a message to his blog on Sunday reproducing an email he sent to the organizers of the “correction,” congratulating them on their actions and asking that his name be added to the ranks of signers.

Gracida is also encouraging the Catholic faithful to add their own signatures to a petition supporting the Correction.

Gracida is the first canonically regular bishop in the Catholic Church who has associated himself with the declaration.

The document, titled “A filial correction concerning the propagation of heresies,” was originally endorsed by more than 60 clergy and lay scholars.

Until receiving Gracida’s signature, the only bishop to have endorsed the Filial Correction was Bishop Bernard Fellay, the superior general of the Priestly Fraternity of St. Pius X (FSSPX or SSPX). The SSPX is an order of priests that currently has irregular status in the Church, but is in talks with the Vatican. Pope Francis himself has declared that their confessions are valid.

The filial correction has also been endorsed by a number of priests whose canonical status is regarded by the Vatican as regular.

The Correction states that Pope Francis has “effectively upheld” seven heretical propositions regarding the sinfulness of adultery, binding nature of moral law, and the reception of the sacraments of the Catholic Church, although it does not judge him personally guilty of the sin of heresy.

The document is written in a respectful but firm tone, expressing “profound grief” at the necessity of correcting the pope, “on account of the propagation of heresies effected by the apostolic exhortation Amoris Laetitia and by other words, deeds and omissions of Your Holiness.”

It decries statements made by the pope in his apostolic exhortation Amoris Laetitia, which seem to excuse acts condemned by the Catholic Church as mortal sins, and allows the sacraments to be given to those living in the sin of adultery. It also laments the pope’s apparent endorsement of the doctrines of Martin Luther on justification, which are condemned by the ecumenical Council of Trent.

Gracida, a former Benedictine monk, served from 1983 to 1997 as the fifth bishop of the Diocese of Corpus Christi. He is 94 years old. He has previously expressed deep concern on his blog about the content of Amoris Laetitia, as well as the apparently illegal acts committed by cardinal electors in the election of Pope Francis.