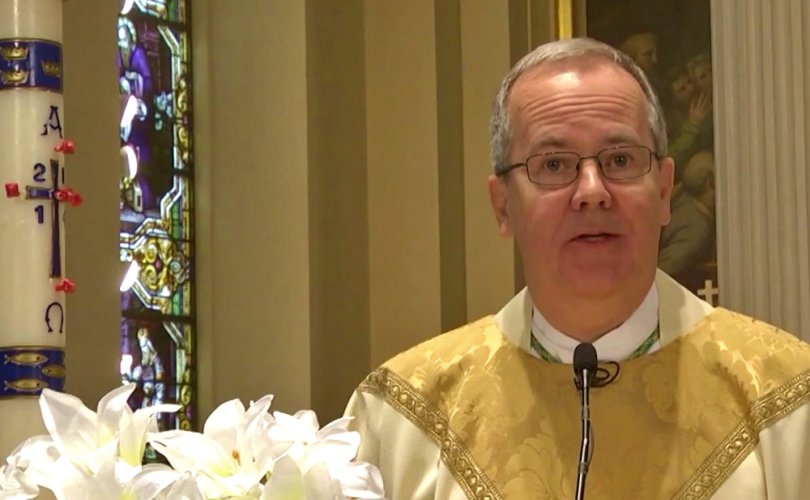 DALLAS, Pennsylvania, November 20, 2017 (LifeSiteNews) – A U.S. bishop is defending a local Catholic university’s invitation to a pro-homosexual priest to have him speak at its winter commencement in the face of almost 20,000 Catholics having signed a petition asking that the invitation be cancelled.

Martin “raises perspectives that challenge readers on both sides of the issue to a greater sense of dialogue and respect for one another,” Bambera said in a statement to Citizen Voice.

“Contrary to what many have asserted, however, Father Martin does not call for any change in Church teaching in his publication. Given Father Martin’s background and current standing as a priest and member of the Society of Jesus, Misericordia University has followed the protocol expected of a Catholic university in extending an invitation to Father Martin to serve as its commencement speaker,” he said.

Fr. James Martin, a Vatican consultant and editor-at-large of the Jesuit-run America magazine, is one of the most recognized proponents of homosexuality within the Catholic Church today.

Cardinal Robert Sarah, prefect of the Congregation for Divine Worship and the Discipline of the Sacraments, wrote in the Wall Street Journal in August that the priest’s book has made him “one of the most outspoken critics of the church’s message with regard to sexuality.”

The announcement of Fr. Martin’s planned appearance at the school founded by the Sisters of Mercy and located in the diocese of Scranton, Pennsylvania, triggered a petition earlier this month to have the university cancel Martin’s address.

The petition, launched on November 10 by TFP Student Action, has so far garnered 19,017 signatures

The pro-gay activist’s invitation to speak at Catholic University of America’s (CUA) Theological College was withdrawn in mid-September.  At the time, Martin suggested that an orchestrated “campaign caused a storm of phone calls, emails and messages to Theological College, which included, I was told, people screaming at the receptionists who answered the phone. In the end, they felt that the expected protests and negative publicity would distract from Alumni Day.”

According to Martin, the rescinded CUA invitation followed, “the cancellation of another lecture at the Annual Investiture Dinner of the Order of the Holy Sepulchre in New York City, scheduled on Oct. 21. The organizers told me that they had received angry emails and calls from several members of the Order.”

And that invitation revocation followed “an earlier cancellation of a lecture in London for Cafod (Catholic International Development Charity in England) which was scheduled for the third week in October.”

Fr. Martin Responds to the Petition

In a phone interview with Catholic Voice, Fr. Martin’s offered his explanation for the petition: “They don’t like LGBT people. It’s homophobia.”

Martin also responded to the TFP Student Action petition on his Facebook page, where he asked, “Sound familiar? Threats from a far-right online site to force the cancellation of a lecture at a Catholic institution. But this time, something different. Things have changed: a Catholic university and a bishop stand up to bullying tactics. Thanks to Bishop Bambera and Misericordia University for your wisdom and courage.”

The TFP petition states that its reason for the petition is Fr. Martin's “push to normalize unnatural vice inside the Church.”