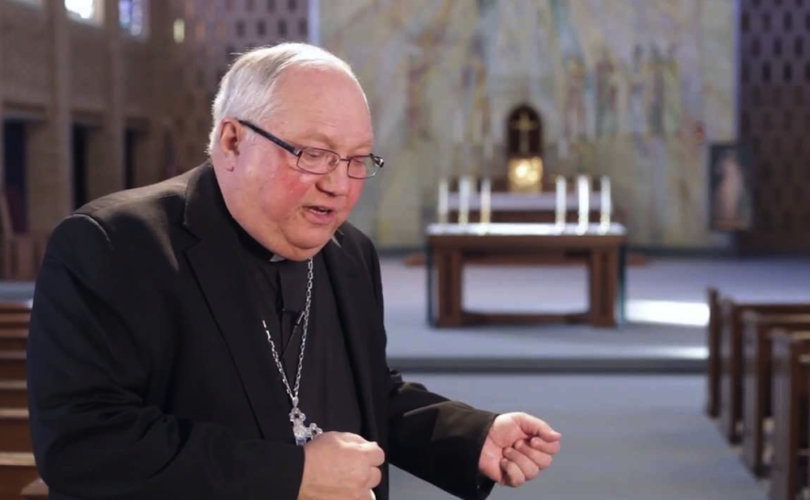 Bishop Morlino also made known his disappointment that the pope attempted to take a “no comment” route when questioned Sunday by the press about Viganò’s assertions.

In an August 27 statement, the Madison bishop affirmed his solidarity with a statement from USCCB President Cardinal Daniel DiNardo that said Vigano’s testimony deserves conclusive answers, and that the bishops’ are renewing their “fraternal affection for the Holy Father in these difficult days.”

“However,” Morlino said, “I must confess my disappointment that in his remarks on the return flight from Dublin to Rome, the Holy Father chose a course of ‘no comment,’ regarding any conclusions that might be drawn from Archbishop Viganò’s allegations.”

Viganò’s extraordinary 11-page, 7,000-word testimony was released Saturday as the pope wrapped up his visit to the World Meeting of Families (WMOF) in Ireland. The Vatican-sponsored gathering was overshadowed by both the abuse crisis and concerns among Catholics the event itself was being used as a vehicle for affirming homosexuality in conflict with Church teaching.

On Sunday’s return trip to Rome, Francis skirted questions on the papal plane about the bombshell allegations that he knew of former Cardinal McCarrick’s abuse of seminarians and young priests, and yet had rescinded sanctions that Pope Benedict XVI had imposed against McCarrick.

“Read the statement carefully yourselves and make your own judgment,” Francis told reporters. “I am not going to say a word about this.”

“I believe that the statement speaks for itself, and you all have sufficient journalistic ability to draw conclusions,” the pope continued. “It is an act of trust. When a little time goes by, and you have drawn conclusions, perhaps I will speak about it, but I would like your professional maturity to do this work. It will do you all good, really.”

Bishop Morlino took issue as well with the pope deferring to journalists to draw their own conclusions about Viganò’s testimony, given today’s pervasive media bias.

Morlino went on to cite in particular the work of the dissenting National Catholic Reporter to illustrate his point on the current state of much of the media.

“I would never ascribe professional maturity to the journalism of the National Catholic Reporter, for example,” the Madison bishop said. “And, predictably, they are leading the charge in a campaign of vilification against Archbishop Viganò.”

The Reporter published a piece Monday that called Vigano a “trafficker in conspiracy theories who mixes fact, fiction and venom to produce something explosive but also suspicious” and “a disgruntled former employee.”

Viganò has categorically denied this, most recently Monday, releasing a statement with supporting documents to prove his innocence, expecting the accusations would be used to discredit him.

The Reporter continued Tuesday with mention of the Minnesota allegations against Viganò, this time acknowledging Viganò’s denial.

Framed around Viganò purportedly having “past controversies,” the article cited the release of the news the pope had met with Kim Davis after Francis’ 2015 U.S. trip, and also Viganò’s participation in the March for Marriage. It listed as well Viganò having overseen the appointments of more orthodox Catholic bishops William Lori of Baltimore, Samuel Aquila of Denver and Salvatore Cordileone of San Francisco, with the claim that “all three (are) viewed as aggressive ‘culture warriors.’”

The piece also referenced Viganò as an “extremely disgruntled archbishop,” inferring he was such because he’d been “denied a red cardinal cap,” and projecting Francis’ recent dubious attribution to the sex abuse crisis of clericalism onto Viganò.

Conversely, voices of orthodoxy and fidelity to Church teaching have spoken in support of Viganò and his having released his testimony on the Church’s abuse crisis.

“There is “no reasonable and plausible cause to doubt the truth content of the document of Archbishop Carlo Maria Viganò,” Bishop Athanasius Schneider of Astana, Kazakhstan stated.

Bishop Joseph E. Strickland of Tyler, Texas, said he found the allegations against the pope and other senior cardinals to be “credible,” and called for a “thorough investigation,” directing his priests Saturday to include his memo on the matter in the August 26 Masses, and “post it on their websites and other social media immediately.”

“Let us be clear that they are still allegations, but as your shepherd I find them to be credible,” Strickland wrote. “Using this standard, the response must be a thorough investigation similar to those conducted any time allegations are deemed to be credible.”

“The declarations made by a prelate of the authority of Archbishop Carlo Maria Viganò must be totally taken to heart by those responsible in the Church,” Cardinal Raymond Burke said. “Each declaration must be subject to investigation, according to the Church’s time-tried procedural law.”

In his statement on the Viganò testimony, Morlino said he was certain of Viganò’s honesty, his loyalty to and love for the Church, and Viganò’s “impeccable integrity.”

“Having renewed my expression of respect and filial affection for the Holy Father,” Morlino said, “I must add that during his tenure as our Apostolic Nuncio, I came to know Archbishop Viganò both professionally and personally, and I remain deeply convinced of his honesty, loyalty to and love for the Church, and impeccable integrity.”

Morlino said the details in Viganò’s testimony “more than fulfilled” the Church’s standard for credible allegations, and thus an investigation with proper canonical procedures is called for.

“In fact, Arch. Viganò has offered a number of concrete, real allegations in his recent document, giving names, dates, places, and the location of supporting documentation – either at the Secretariat of State or at the Apostolic Nunciature,” said Morlino. “Thus, the criteria for credible allegations are more than fulfilled, and an investigation, according to proper canonical procedures, is certainly in order.”