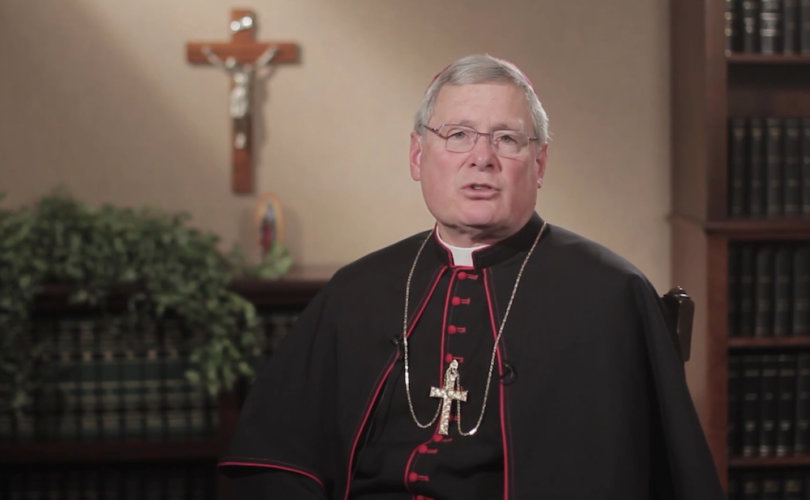 Bishop David Malloy of the Diocese of Rockford, Illinois

ROCKFORD, Illinois, January 24, 2017 (LifeSiteNews) — Bishop David Malloy has told priests in his Rockford, Illinois diocese they must ask permission before offering the traditional form of the Mass. The new rule has critics alarmed as it contravenes Pope Benedict XVI’s 2007 document Summorum Pontificum, which promoted wider celebration of the traditional Mass.

“The idea that Bishop Malloy has the right to repeal Summorum Pontificum for his diocese is simply wrong,” Dr. Joseph Shaw wrote in Rorate Caeli.

“There is no way a bishop can reverse the solemn legislation of the Supreme Pontiff,” added Shaw, a University of Oxford academic and chairman of the U.K. Latin Mass Society.

Malloy invoked the need for “unity” as the basis for his January 11 directive.

He also required that priests ask permission to say Mass facing the altar, or “ad orientem,” a practice that Cardinal Robert Sarah, Vatican head of liturgy, encouraged all Latin-rite priests to adopt.

“The unity of our sacramental celebration strengthens our shared faith and limits confusion among the faithful throughout the Diocese,” Malloy wrote.

The letter goes on:

… in order to underscore our unity in prayer and to avoid differences between and even within parishes on this point, I ask that no Masses be celebrated ‘ad orientem' without my permission.

Second, for similar reasons, in keeping with Art. 5 §1 of Summorum Pontificum, and with due regard to Art. 2 of that same document, Masses are not to be celebrated using the Extraordinary Form without my permission.

Article 2 states the “priest needs no permission from the Apostolic See or from his own ordinary” to offer the Extraordinary Form “in Masses celebrated without people.”

Article 5 §1 states in part that a pastor should “willingly receive” the petitions of parishioners who are “attached to the previous liturgical tradition” to celebrate the Extraordinary Form.

Shaw writes: “Having referred to these sections, Bishop Malloy then contradicts them: priests do need his permission, and they should not willingly receive requests to celebrate the ancient Mass.”

Article 5, §1 further states that when parishioners request the Tridentine Mass, the pastor should “see to it that the good of these faithful be harmoniously brought into accord with the ordinary pastoral care of the parish, under the governance of the Bishop according to canon 392, by avoiding discord and by fostering the unity of the whole Church.”

Canon 392 notes that: “Since the bishop must defend the unity of the universal Church, he is bound to foster the discipline which is common to the whole Church, and so press for the observance of all ecclesiastical laws.”

Shaw writes that it’s “obvious” the statement of Article 5, §1 “is not intended to contradict the earlier statement that priests don’t need permission to celebrate the Traditional Mass; rather, it is intended to govern the way that they go about doing so.”

Interestingly, Canon 392 also enjoins a bishop to “exercise vigilance so that abuses do not creep into ecclesiastical discipline, especially regarding the ministry of the word, the celebration of the sacraments and sacramentals, the worship of God and the veneration of the saints, and the administration of goods.”

“How do you ‘avoid discord’ by managing these traditionally inclined faithful Catholics (with their large families) when at the same time you allow every other parish to do just about anything they want without the slightest peep, even in the face of absurd innovations or liturgical abuses?” Fr. John Zuhldorf wrote in a blog post entitled “Trad lives matter!”

“The Bishop of Rockford wrote ‘with due regard to Art. 2’ and then he completely ignored it and wrote something that precisely contradicted it. According to Art. 2, priests of that diocese – or any other diocese in the world for that matter – do not need his permission.”

“Granted, Art. 2 says ‘without the people,’ but the Bishop did not restrict himself to that,” Zuhlsdorf said.

Malloy appears to argue the Tridentine Mass is a danger to unity “merely from the fact that it is different from the Novus Ordo,” observed Shaw, adding that this also seems to be behind the ban to celebrate the Novus Ordo Mass “ad orientem.”

But that not only contradicts Summorum Pontificum but Vatican II, he contended.

The Vatican II document Sacrosanctum Concilium “declares that holy Mother Church holds all lawfully acknowledged rites to be of equal right and dignity; that she wishes to preserve them in the future and to foster them in every way(#4).”

It further declares: “Even in the liturgy, the Church has no wish to impose a rigid uniformity in matters which do not implicate the faith or the good of the whole community. (37)”

Ironically, Malloy’s argument “is also contrary to the whole tenor of the 1970 Missal,” Shaw said, “which, as has often been pointed out, is a Missal of options.”

LifeSiteNews contacted the Rockford diocese for comment but has not yet received a response.