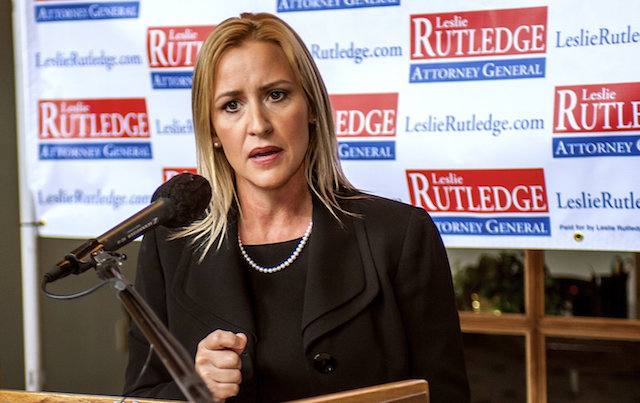 LITTLE ROCK, Arkansas, January 19, 2018 (LifeSiteNews) – The Bishop of Little Rock is refusing to attend his local March for Life this year because the guest of honor supports the death penalty.

Bishop Anthony Taylor wrote a letter explaining that he will not be attending because the keynote speaker at the march is Attorney General Leslie Rutledge. Taylor accused Rutledge of “working tirelessly to secure the execution of four criminals who posed no further threat to society.”

“You will recall that the Diocese of Little Rock was very vocal in appealing for clemency for these four men, but we were opposed at every turn by Attorney General Rutledge,” the bishop wrote. “For this reason, I asked Arkansas Right to Life to choose a more appropriate keynote speaker, indicating that I could not participate in what was supposed to be a pro-life event otherwise. But Arkansas Right to Life has refused to do so. “

Taylor told his Catholic flock that they were “still free” to go to the March for Life but hinted that they could “skip the rally.”

He acknowledged in his letter that Rutledge has “good anti-abortion credentials.”

Arkansas Right to Life said in a press release that Sunday’s March for Life would go forward as planned. The group emphasized that it is a “single issue organization.”

“The Arkansas Right to Life is a single issue organization dedicated to seeking protection for the lives of innocent unborn children,” it wrote. “We hope that everyone who shares our views, that innocent unborn children should be protected, will support and attend the March, regardless of their views on other issues in which [we do] not take a stand.”

Bishop Taylor underscored his opposition to capital punishment by explaining that the Catholic Church teaches a “consistent ethic of life”.

“As you know, the Church teaches a consistent ethic of life in which human life and human dignity must be protected from the first moment of conception to natural death and every stage in between,” he wrote. “This means, among other things, that all lives have inherent God-given dignity. Even people who have been sentenced to death possess this dignity, which is why capital punishment must be abolished.”

The bishop encouraged his readers to attend in a number of pro-life events at his cathedral on the weekend of the March for Life, which will take place on Sunday, January 21. Services include an all-night vigil and two Masses for Life. He also encouraged them to participate in the U.S. Conference of Catholic Bishops’ 9 Days for Life Campaign, saying “Note that day 8 calls for an end to the use of the death penalty in our country.”

While many modern Roman Catholic prelates strongly oppose the death penalty, the Church does not condemn the practice absolutely. According to the 1992 Catechism of the Catholic Church, the Church recognizes “the right and duty” of “legitimate public authority” to punish evil-doers “by means of punishment commensurate with the gravity of the crime, not excluding, in cases of extreme gravity, the death penalty (CCCC 2266).”

Not all moral issues have the same moral weight as abortion and euthanasia. For example, if a Catholic were to be at odds with the Holy Father on the application of capital punishment or on the decision to wage war, he would not for that reason be considered unworthy to present himself to receive Holy Communion. While the Church exhorts civil authorities to seek peace, not war, and to exercise discretion and mercy in imposing punishment on criminals, it may still be permissible to take up arms to repel an aggressor or to have recourse to capital punishment. There may be a legitimate diversity of opinion even among Catholics about waging war and applying the death penalty, but not however with regard to abortion and euthanasia.

The danger of the ‘seamless garment’ mentality

LA archbishop rips the seamless garment: Abortion and euthanasia ‘stand alone’ among today’s injustices in US