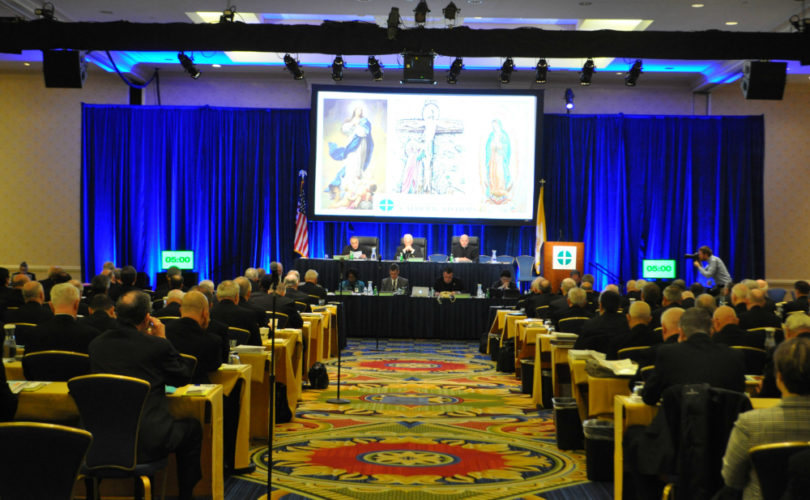 BALTIMORE, Maryland, November 20, 2015 (LifeSiteNews) — A group of Pope Francis’ episcopal appointees and other like-minded prelates provoked an open clash at the American Catholic bishops’ fall meeting in Baltimore this week as they pressed the conference to rewrite its election guide for 2016 to downplay the importance of the battle for life and family.

Ahead of a vote on a revision to the bishops’ Forming Consciences for Faithful Citizenship, Bishop Robert McElroy made a pointed argument that the document was out of step with Pope Francis’ priorities — specifically, by putting too much emphasis on abortion and euthanasia, and not enough on poverty and the environment.

The revised document, and the new introductory note, were the fruit of roughly 16 months of “painstaking work” by some 12 USCCB committees.

The bishops have released the document every four years since 2007, as a resource for Catholics ahead of every election cycle. The release is specifically timed for the year prior to each cycle to avoid giving the appearance of attempting to sway a particular election.

The purpose of the update was to refocus the policy areas of focus in light of cultural developments since the document’s 2007 inception and clarify some areas of Catholic social teaching, incorporating the later teaching documents of Pope Benedict and all of those from Pope Francis. The revision included adding 25 new quotes from Pope Francis, on issues such as the environment, immigration, religious liberty, and poverty.

The updates address recent developments in the U.S. in both domestic and foreign policy on issues such as abortion, euthanasia, the legal definition of homosexual “marriage” and its increasing prevalence across the country, materialism and the environment, deadly religious persecution throughout the world, religious freedom issues as they pertain to personal conscience and the Church's ability to perform ministry, economic policy concerning the poor, the immigration issue and refugee crisis, and wars, terror and violence in general.

Despite the bevy of new quotes from Pope Francis, a few bishops proposed scrapping the entire document on the claim that it doesn’t reflect the current pope’s “radical transformation of priorities.”

In his address, Bishop McElroy, appointed as head of the Diocese of San Diego by Pope Francis in March, acknowledged that the working group had carried out the mandate given it by the Conference, but said that mandate was in “serious error” and had created a “profoundly difficult choice” for the bishops.

“The problem is we are not living in 2007,” he told the assembly, and said the working group had no choice but to keep the structure of the document and prioritization of issues in place.

“And that does not take into account the fact that Pope Francis has in certain aspects of the social doctrine of the Church, radically transformed the prioritization of Catholic social teaching and its elements,” Bishop McElroy said. “Not the truth of them, not the substance of them, but the prioritization of them, has radically transformed that, in articulating the claims that fall upon the citizen as believer and disciple of Jesus Christ. This document does not do that.”

He said the document failed because it denies the pope’s emphasis on poverty and the environment. “On the key and central point of its failure I think it is this, if I understand Pope Francis correctly, it is, that the issues of poverty, particularly global poverty with all its victimization of men and women and families across the world, and children, that global poverty and the degradation of the earth, which threaten the whole of our humanity, that these two issues lie at the very center and core of Catholic social teaching as priorities for us in every public policy position. And this is not reflected in this document.”

Bishop McElroy advocated the idea that poverty and the environment are on the par with defense of life, inferring that holding life as the preeminent issue was an outdated mindset. “Specifically, I believe that the pope is telling us that alongside the issues of abortion and euthanasia which are central aspects of our commitment to transform this world, poverty and the degradation of the earth are also central,” he stated. “But this document keeps to the structure of world view of 2007. It does not put those there.”

“In the specific areas where it weighs out how does the voter make a decision, it tilts in favor of abortion and euthanasia and excludes poverty and the environment,” the bishop said, also supposing that pro-life supporters had twisted the document’s message in the past for their own ends. “It provides a warrant for those who will misuse the document outside this room, to exclude poverty and exclude the environment as key issues, and say they are secondary and cite this document as they have done for the past two electoral cycles.”

The working group’s representative, Cardinal Daniel DiNardo of Galveston-Houston, responded with a frank criticism of McElroy’s use of Pope Francis to push his argument. In a comment that earned him applause from many of the bishops, DiNardo said:

Well my initial comments, and I think the group will be with me on this, is that ours is a hermeneutic of continuity, here, Bishop. As you say yourself, “IF I read him correctly.” We think we've also read him correctly, and we also believe that the way we have organized this, admittedly in a structure that pre-existed, but with real attentiveness to the pastoral ministry and the magisterium of Pope Francis, that we have brought in those considerations, perhaps not to your satisfaction and to the rhetorical floor issues with which you bring them, but I think that we have brought to light an important dimension of what Pope Francis and the later ministry of Pope Benedict is. And I do believe the document is still very useful for teaching.

McElroy’s intervention against the document was joined by others from the U.S. Bishops’ progressive camp.

Bishop Gerald Kicanas, head of the Diocese of Tucson since Pope John Paul II appointed him in 2003, was the first to suggest rejecting the revised document, and the introductory note, and starting over. “I think we need a new document,” he said. “I think it was a mistake really to try to revise a document from 2007, when so much has happened since then. I think the tone and the content needs to be looked at much more carefully if it’s to be a teaching document.”

Cardinal Daniel DiNardo took issue with that criticism as well, responding that updating the document was what the committees were tasked with. “We pretty vigorously disagree with you that it’s not a helpful teaching document,” he said. “We think it is a good teaching document.”

The cardinal went on to explain that Faithful Citizenship was a resource that could be considered supplemental to what a bishop might do to provide teaching in his own diocese.

Bishop John Stowe, appointed by Pope Francis to oversee the Diocese of Lexington, Kentucky, in March 2015, concurred with Bishop Kicanas that a lot has changed since 2007, and advocated starting over. He suggested “in retrospect” that the bishops think about the document in light of Pope Francis’ recent U.S. visit and the Year of Mercy, opining that it could be seen as lacking in mercy.

“I’m glad to see the corrections of the ‘intrinsically evil’ language that was in there, the modification of that language,” Bishop Stowe said. “But I’m struck by Pope Francis’ line in his Bull of Indiction for the Year of Mercy, that, ‘Nothing in the Church’s preaching and witness can be lacking in mercy.’ And I’m not certain that’s how this document will be received in the current climate. So I think it does, even if it’s too late, it does merit some consideration for beginning anew.”

Chicago Archbishop Blase Cupich, Pope Francis’ most significant U.S. appointment to date, added his voice to Bishop McElroy’s in a video interview with America magazine after the debate.

“I think it was a real high moment … for the conference because he spoke in a way that was really very educated, very erudite and informative. I think it gave us all an opportunity to think about the issues that he raised,” Cupich said.

“As Bishop McElroy noted, the issues of global poverty and the degradation of the environment now need to be put in that first tier of issues,” he continued. “It doesn’t diminish the effectiveness, or the impact or importance of those other issues. But others now have to be joined in that.”

The session ended with Washington Cardinal Donald Wuerl speaking in favor of Faithful Citizenship as revised and with the new introduction, so as to have something to release this year.

Toward the end of that session’s discussion, just after Bishop McElroy spoke, someone had handed Cardinal DiNardo a note at the front podium.

After additional discussion at a subsequent session, and some more support both for abandoning the document and moving forward with it, the bishops adopted the introductory note in a vote of 217-16, with two abtaining, and adopted the revised document in a vote of 210-21, with five abstaining.

Faithful Citizenship has drawn strong criticism in the past for wording that opens the door for Catholics to support pro-abortion politicians — in particular in the last two election cycles, Barack Obama, commonly acknowledged as the most pro-abortion president in U.S. history.

Cardinal Raymond Burke told LifeSiteNews in 2009 that the document, in fact, bore part of the blame for Obama’s election in 2008 because of the confusion it caused among the faithful. “While [Faithful Citizenship] stated that the issue of life was the first and most important issue, it went on in some specific areas to say ‘but there are other issues’ that are of comparable importance without making necessary distinctions,” said Burke, then an archbishop and prefect of the Vatican’s Apostolic Signatura.

“The economic situation, or opposition to the war in Iraq, or whatever it may be, those things don’t rise to the same level as something that is always and everywhere evil, namely the killing of innocent and defenceless human life.”