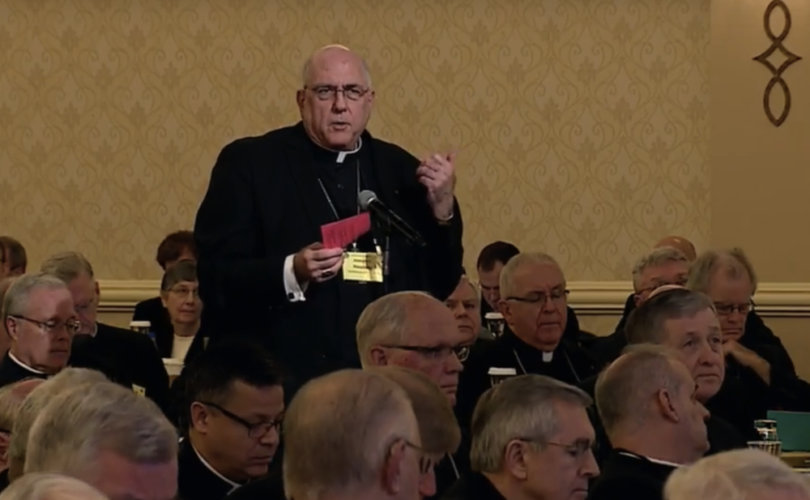 WASHINGTON, D.C., November 21, 2017 (LifeSiteNews) – The Bishops of the United States voted overwhelmingly at their recent Fall Assembly in Baltimore, Maryland, to develop a “renewed pastoral plan for marriage and family life ministry and advocacy in light of Amoris Laetitia.”

Pope Francis’ Apostolic Exhortation, Amoris Laetitia, the “Joy of Love,” was the fruit of a three-year synodal process called for by the Holy Father in 2013.

The Joy of Love: dampened by division, haunted by unanswered questions

Yet promulgation of the document was immediately met with controversy, which has proved to be divisive and long-lasting.

It is this document that led four Cardinals to submit five “dubia,” i.e., yes-or-no questions, to the Pope asking him if his 2016 exhortation on marriage and the family conforms to perennial Catholic teaching on marriage, moral absolutes, conscience, and the sacraments.

The Pope has refused to answer the Cardinal’s questions, despite the moral and pastoral chaos that ensued throughout the whole of Christendom as priests, bishops, and cardinals interpreted his teachings in completely contradictory ways. Some allowed civilly-divorced-and-remarried Catholics living in habitual adultery to receive Holy Communion. Some did not.

Subsequently, a group of concerned 216 clerics and scholars issued a “filial correction” charging Pope Francis with permitting the spread of seven heresies, at least by omission.

More recently, Fr. Thomas Weinandy, OFM, cap., an acclaimed Christologist appointed by Pope Francis to a five-year term on the Vatican’s International Theological Commission, wrote a letter to Pope Francis telling him his papacy is marked by “chronic confusion,” and that the pope teaches with “a seemingly intentional lack of clarity.”

Pope Francis has chosen not to answer any of these requests for clarification regarding Amoris Laetitia, and it is that silence that has permitted confusion to persist, and division to deepen and metastasize.

The U.S. bishops hope that attention can be drawn away from the document’s troubling Chapter 8, as they mine it for what they see as a vast reservoir of pastoral wisdom for marriages and families in our day and age.

Speaking in the absence of the chairman of the USCCB’s committee on laity, marriage, family life and youth, Archbishop Charles Chaput, who was called away for meetings in Rome, Most Rev. Richard J. Malone introduced the renewed pastoral plan initiative to the assembly.

Bishop Malone explained the genesis of the project: “Marriage and family life have been a priority for our Conference for decades. Besides the pastoral plan on family ministry first issued in 1978, and reaffirmed in 1990, numerous statements, resources and initiatives have been offered over the years, including our national pastoral initiative on Marriage launched in 2005, and our pastoral letter on marriage in 2009.”

“The recent synods, and Pope Francis’ Evangelii Gaudium and Amoris Laetitia, provide a significant opportunity to present a renewed pastoral plan on marriage and family life, to assist the many good efforts underway now in our dioceses and parishes and to advance the pastoral conversion called for by our Holy Father.”

Why a pastoral plan? Why another document?

Bishop Malone continued: “First, a USCCB statement would be an important response to Amoris Laetitia, a fitting way to receive the exhortation at the national level and encourage a long-term appropriation and implementation.

“Second, a pastoral plan would encourage a broader reading of AL and seek to advance more conversation and engagement around strengthening marriage and family life.

“Third, It has been nearly 40 years since we developed a pastoral plan in this area. It’s time to take a new look.

“The challenges facing young people, marriages and families are many as we so well know, and our pastoral outreach needs to respond in ever new and engaging ways.”

The design of the renewed pastoral plan

Part I will be an Introduction proclaiming the joy of love and the Gospel of the family, and then cover the realities of families today; the light of God’s word and his plan for marriage and family life, and the call to missionary conversion.

Part II is envisioned as a rededication to Marriage and Family Life, following the Holy Father’s hope that all will feel called to love and cherish family life; that married couples will persevere in love; and that all of us will be a sign of mercy and closeness to all.

Part III would provide a pastoral plan/framework that would offer helpful considerations around the four proposed pillars of:

Part IV will speak of Implementation of the pastoral plan and the need to engage families themselves, the parish community as a family of families, and the broader collaboration across ministries, apostolates and communities.

Part V will be the Conclusion, which would follow the spirit of Amoris Laetitia, drawing upon the Pope’s example of invoking the fire of the Holy Spirit upon marriages and families.

Over the next two years, as the statement is drafted, the committee charged with writing the document will consult with several other collaborating committees as well as leaders in the field, with anticipated final review by the entire USCCB in November 2019.

Immediate response by the bishops

Archbishop Daniel DiNardo, chairman of the USCCB who was presiding over the assembly, threw open the floor for comments.

A theme that dominated several of the comments was expressed most succinctly by Most Rev. Robert Barron, Auxiliary Bishop of Los Angeles: “I just think it’s been a  tragedy that the reception of the document has been so poor in our country. If you do a web search of Amoris Laetitia, you get a mountain of literature. But it’s all about a particular chapter and even a particular footnote within that chapter.”

“As important as that question is, I think it’s led to an overlooking of this really extraordinarily rich document,” continued Bishop Barron. “It’s good for us to seize control of the process because we have been positioned by an awful lot of people in the blogosphere who are forcing people to read this document in a particular way.”

Most Rev. Joseph E. Kurtz, Archbishop of Louisville, had already expressed a similar sentiment about the controversy surrounding Amoris Laetitia. “It seems to me if I have a critique, it was that through the press, the very important chapter, Chapter 8, got all of the headlines.”

Bishops express their hopes for the scope, content, and impact of the renewed pastoral plan

The remaining comments tended to focus on down-to-earth, rubber-meets-the-road advice gleaned from years of pastoral experience.

Most Rev. Paul D. Etienne, Archbishop of Anchorage, began in a similar vein, saying, “There are a lot of things within the document, Amoris Laetitia, that can use some highlighting.” But then he pivoted. “This is an important opportunity for us as the pastors and the shepherds of this church to tell our married couples how much we appreciate what they do. It sounds like a very simple thing, but I think they’re wanting us to express our gratitude for their love and the commitment and the sacrifices that it entails, particularly in a world that’s drawing a lot of confusion around them.”

The Alaskan bishop revealed his inspiration, saying, “We’ve traveled around and done a lot of rural life celebrations over the years … in the midst of people making their living on the ranches, on the farms. I was surprised how many of them came up to me after those celebrations to say, ‘Bishop, you’re the first bishop that has ever told us that the church appreciates what we do.’”

Most Rev. David E. Foley, Bishop Emeritus of Birmingham, said, “In Amoris Laetitia, I read the Holy Father, Pope Francis, as drawing attention particularly to the devastating culture of secularism and atheism, and it’s affecting the minds and the hearts of the young people preparing to get married, so even if they take that vow, sacramental vow, they still have in the back of their mind this culture — as the Holy Father says — ‘a throw away culture, that if it doesn’t work, we’ll move onto something else.”

Most Rev. Joseph F. Naumann, Archbishop of Kansas City, said it is important to encourage and let married couples “know what they’re doing is so important, not just for them and for their families, but for society and for the culture and for the church. Sometimes in the day-to-day living out of marriage, and the small decisions that they’re making — really heroic decisions of love — I think our couples don’t always see the significance of what they’re doing in their daily lives.”

Most Rev. Joseph Cordileone, Archbishop of San Francisco, said, “We have lots of programs for marriage preparation, but too often we ignore them after they get married and they have this in-between time when they start having children and get reconnected with the parish and with the school.” He continued, “We see the devastation that family fragmentation has caused, all throughout society in so many ways, including the connection between family fragmentation and poverty.”

“We have data for the formula to keep families together. We know that couples who follow the church’s teaching on responsible parenthood, attend church together, and pray together, have a very low divorce rate. It’s below 2 percent.

Bishop Cordileone concluded: “So can you imagine a church with families – less than 2 percent – affected by divorce?”

After discussion, the bishops cast their ballots regarding the measure. They voted overwhelmingly to move forward with developing the new pastoral plan based on Amoris Laetitia: 94 percent voted for, 5 percent voted no, with less than 1 percent choosing to abstain.

The bishops seem to know that they have their work cut out for them in order to overcome the negative view many have come to form regarding Amoris Laetitia, which is the foundation upon which their pastoral plan will be built. It may be difficult to achieve their goal if the Vatican remains silent in the face of so many Cardinals, clerics and scholars seeking clarity on the document.