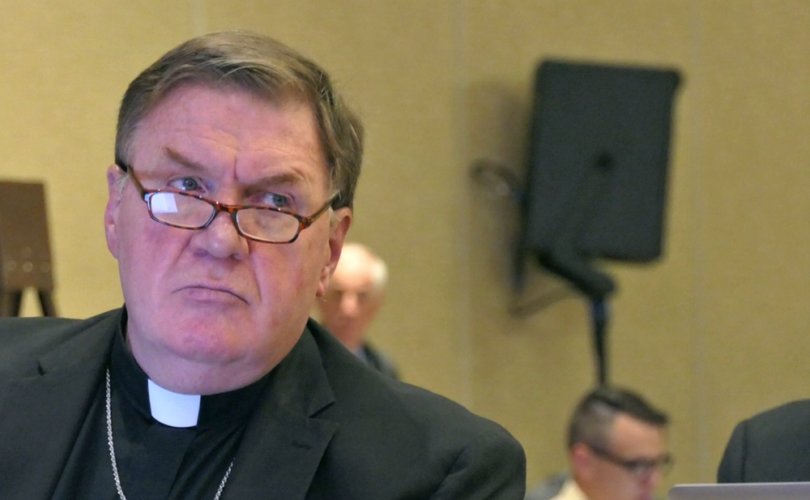 NEWARK, New Jersey, June 15, 2017 (LifeSiteNews) – Cardinal Joseph Tobin told the New York Times that it would have been “backhanded” of him to mention anything about sin to the “LGBT pilgrims” who he personally welcomed to a Cathedral Mass last month.

On Sunday, May 21, the Cardinal was on hand at Newark’s Cathedral Basilica of the Sacred Heart to personally welcome homosexuals on a so-called “LGBT Pilgrimage.”

“It was appropriate to welcome people to come and pray and call them who they were. And later on, we can talk,” he said.

The Cardinal said that to “combine his welcome with a criticism would not have been a full welcome at all.”

Cardinal Tobin is one of a growing number of priests and prelates who now challenge the Catholic Church’s perennial teaching on the meaning and purpose of human sexuality.

Tobin’s words and actions to the “LGBT pilgrims” fly in the face of Cardinal Sarah’s recently published rebuke to his fellow priests and bishops where he urged them to be faithful to magisterial teaching on homosexuality.

Cardinal Sarah said that there are “things in the Catechism about homosexuality that some members of the clergy choose not to quote, including the clear warning: ‘under no circumstances can [homosexual acts] be approved’ (CCC 2357).”

“The respect and sensitivity to which the Catechism rightly calls us does not give us permission to deprive men and women who experience SSA (same-sex attraction) of the fullness of the Gospel. To omit the ‘hard sayings’ of Christ and his Church is not charity,” he said.

Daniel Mattson, a chaste same-sex-attracted Catholic, noted in his recently published book Why I Don’t Call Myself Gay that the “reframing of human sexuality from behavior to identity has brought about a lot of confusion in the world, especially among young people.”

Mattson went further and spoke of the “empty promises of coming out” that “leads to a belief in what is ultimately an unreal condition — it paints a false image of the human person and traps people into sexual identities that are disconnected with reality.”

Cardinal Tobin’s unqualified welcome to the “LGBT pilgrims” is easily viewed as another step in what critics say in an incremental acceptance of the notion that active homosexuality should be recognized as a valid way of life within the Church.

But the Catholic Church teaches that homosexual acts are “contrary to natural law” and that they “close the sexual act to the gift of life.” The Church teaches, as well, that while Scripture presents homosexual acts as acts of “grave depravity,” individuals with same-sex attraction must be “accepted with respect, compassion and sensitivity,” and also that they are called to “chastity.” The Catholic Church also teaches that those who commit grave sin risk cutting themselves off from God and losing eternal life.

The Church calls Catholics undergoing trials, including those struggling with same-sex attraction, to unite their suffering with Christ and that salvation comes from repentance and turning away from sin.

Some other high profile priests and bishops pushing the envelope on the acceptance of homosexuality within the Church include:

In the Archdiocese of New York, leaders of “gay and lesbian ministries” in three separate parishes openly flout Catholic teaching on sexual morality, saying that their lifestyle choices are part of how God made them.