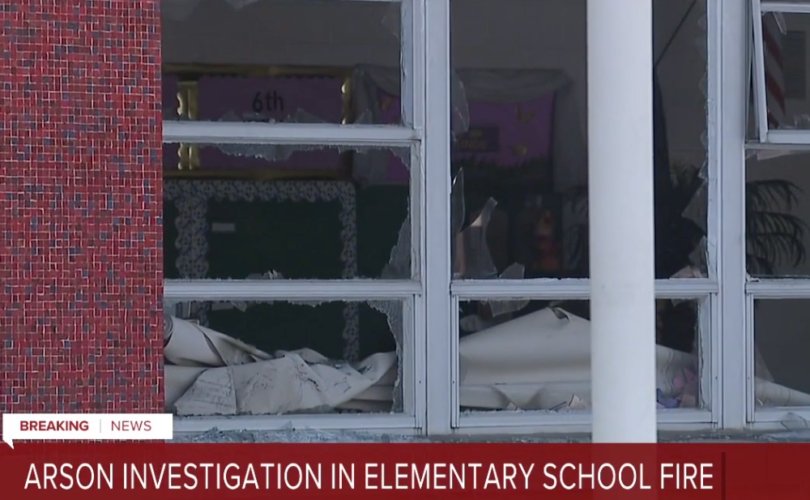 (LifeSiteNews) – Multiple Catholic churches, cemeteries, and schools in America have been the targets of vandalism in recent weeks as an apparent anti-Catholic crime wave hits parts of the country.

According to the National Catholic Register, during just the month of February in the United States, vandals have desecrated dozens of graves in Catholic cemeteries, toppled or vandalized multiple Catholic statues and parishes, and even set fire to one Catholic church. The locations of the anti-Catholic crime wave are widespread and include the states of Georgia, New Mexico, Pennsylvania, Massachusetts, and Ohio.

On February 24 in the Norristown, Pennsylvania area, vandals spray-painted swastikas on headstones at three different Catholic cemeteries, with reports from the Associated Press saying it appears the same spray paint was used in each of the three events.

In another Massachusetts town near Springfield, The Boston Globe reported that two young boys face felony counts of vandalism after spray painting a statue of Blessed Marie-Anne Blondin and a clothing donation box on the property of St. Elizabeth Parish.

In Parma, Ohio, firefighters had to put out a fire at St. Anthony of Padua school, with local fire officials stating the school was a target of arson, and the Blue Ribbon Arson Committee announcing a $5,000 reward for any tip that leads to an arrest.

According to local reports, the same school had been the target of vandalism just weeks before. Adding to the potential that anti-Catholic sentiment is rising, local authorities do not think the arson and the vandalism were perpetrated by the same person.

In Albuquerque, New Mexico, the Shrine of the Little Flower, named after St. Therese of the Infant Jesus, four separate stained-glass windows were shattered on Valentine’s Day, with the vandals also dumping out garbage all around the building and damaging the roof of the church.

While part of a growing pattern, Father Vincent Paul Chavez, the pastor at the New Mexico church, indicated that the “serious vandalism” was done by a “homeless person off the streets” and attributed the attack to a “behavioral health issue” rather than anti-Catholic belief.

Chavez indicated that downtown churches have been attacked previously by troubled members of the community, which he says is the result of a serious health crisis in the state.

“This has happened in the past. Other beautiful churches downtown have been vandalized and we have a serious behavioral health crisis here in New Mexico,” explained Chavez.

“Daily, we deal with assaults here to ourselves and to our property.”

While Catholic churches in North America are often targeted by the mentally disturbed or troubled youth, there has been a rising trend of politically motivated desecration both in America and abroad, often linked to pro-abortion activism.

Earlier this year at the March for Life in Washington, D.C., pro-abortion activists projected blasphemous and sacrilegious messages onto the Basilica of the National Shrine of the Immaculate Conception.

In Poland and Canada, pro-abortion activists have also vandalized churches with messages in favor of abortion as a way to show their displeasure with the Catholic Church’s unchangeable condemnation of the practice.