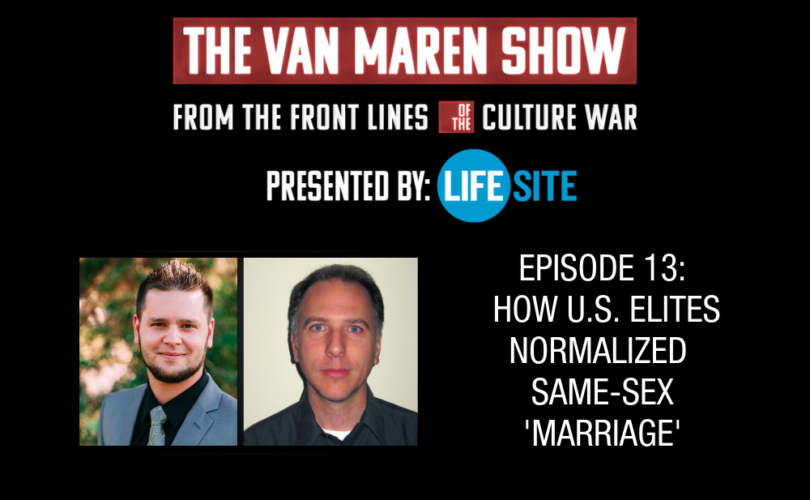 April 17, 2018 (LifeSiteNews) — Political science professor Darel E. Paul’s book “From Tolerance to Equality: How Elites Brought America to Same-Sex Marriage,” is a must read for anyone interested in learning how America went from being almost universally opposed to homosexual “marriage” to now largely being in favor of it. For those who don’t have time to read the book, this 54-minute interview with Jonathon Van Maren is an excellent place to start.

“What I do in the book is take a class approach,” Paul says. “I really think that the elites…in the United States change their minds and [their] views kind of broadly shape the rest of society.”

Host Jonathan Van Maren asks Professor Paul just who the elites are, why and how they embraced same-sex “marriage,” and whether they’ll do the same for transgenderism.

The elites are “people with high levels of education and high incomes….people in particular kinds of occupations,” Paul says. Medical doctors, surgeons, professors, psychiatrists, engineers, managers of large corporations and the like. “Most elites in America are rich kind of by definition if you will but also heavily white. It is the whitest social class in America.”

Paul, a conservative academic who teaches about economics and geopolitics at Williams College in Massachusetts, argues that those who comprise the elite class in America have changed over time. In the past, the WASPs (White, Anglo-Saxon, Protestant) were largely in control. At other times in American history, it has been the manufacturing class and the East Coast bankers. Today, the “new elite” is comprised of “professionals and managers” who support an “ideology of diversity” that makes them “quite intolerant” of Southerners, evangelicals, Mormons, and others.

Van Maren and Paul discuss the secularization of the U.S. since the early 1990s, focusing especially on the emergence of the elite’s support for homosexual “marriage.” Paul argues that the 90s was a time of rapid change, and that the elites began to think that procreation, marriage, and sex was no longer something that needed to be unified anymore due to evolving cultural and sociological dynamics. “Gays and lesbians have a particular kind of symbolic status within if you will the firmament of diversity,” Paul says. “They embody diversity in a way that others don't and what gays and lesbians do for the diversity ideology is they tie it to authenticity and they tie it to success.”

“Rich, white liberals,” Paul continues, support the diversity agenda because “it's a way in part of legitimating their own power and influence at least to themselves.” It’s “diversity without tears” and “a painless, nearly cost free way of promoting their own righteousness.”

Paul and Van Maren close their discussion by observing that corporations were among the first to push the LGBT agenda. They also give their predictions on whether the so-called transgender movement will be as easily mainstreamed as the homosexual “marriage” movement was.

For a full listing of episodes, and to subscribe via various channels, visit the show's Pippa.io webpage here.

To receive an email when a new episode is uploaded, subscribe here.