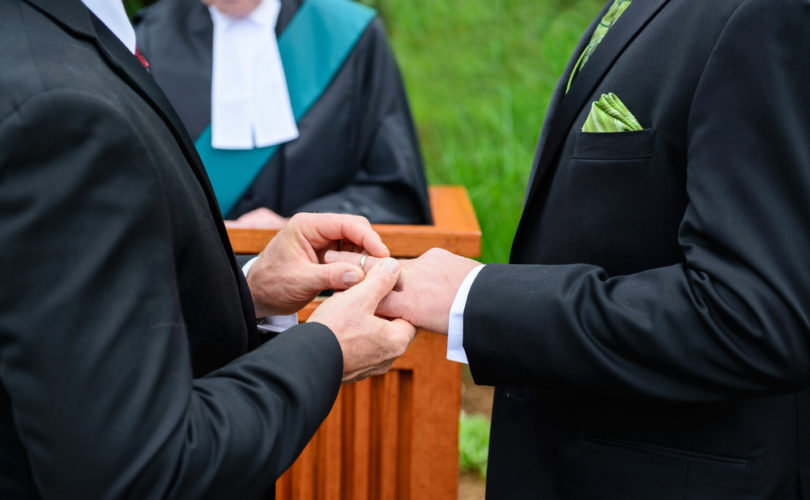 May 2, 2018 (LifeSiteNews) – The Church of England is torn over plans by the The Episcopal Church (TEC) in the United States to efface the terms “husband” and “wife” – as well as references to “procreation” – from its marriage liturgy.

The change is meant to make the church’s marriage ceremonies more “gay-friendly.” Gay and lesbian Episcopalians have complained that the language of the current liturgy is offensive and exclusionary.

The move prompted a critical response from Church of England Secretary General William Nye last October, strongly urging the TEC to reconsider. The letter threatened to cut ties with the U.S. church if it adopts the planned gender-neutral, replacing the current wording in its Book of Common Prayer.

“The new service removes the phrase ‘the union of husband and wife’ and replaces it with ‘the union of two people,’” according to a report in the U.K. Telegraph. It also “replaces the section which talks about part of God's intention for marriage being ‘for the procreation of children’ with the phrase ‘for the gift of children’ to make it more relevant for same-sex couples who may wish to adopt.”

Since then, the Bishop of Buckingham, Alan Wilson, along with 30 of the 483 members of the Anglican Church’s ruling synod, have stepped forward to support the TEC revised marriage liturgy, opposing the Church of England’s (CofE) leadership.

An Anglican LGBT advocacy group, One Body One Faith, has also penned an open letter blasting Nye for upholding the immutable nature of marriage as solely between a man and a woman.

The letter states that the TEC in the U.S., which plans to make the marriage liturgy gender neutral, is “courageous, just, and Christ-like” and the CofE’s insistence on maintaining the definition of marriage has produced “anger, frustration and disappointment.”

The letter further suggests that the CofE’s upholding of Church doctrine represents a “refusal to listen” and is “the single biggest missional disaster of our generation.”

“It should not need saying, but it bears repeating,” the letter continued. “No one is attracted to a group of Christians who profess the love of Christ but seem incapable of recognizing it in the loving, committed relationships of two people. These matters are not disconnected.”

“Dating as far back as 1976, the Episcopal Church has engulfed itself in controversy surrounding its goal of becoming a radically inclusive church, regardless of Biblical doctrine,” ChristianJournal.net reported, as it has made acceptance and incorporation of homosexuality and transgenderism a priority.

Currently, TEC in the U.S. permits LGBT clergy members and for gay couples to wed in the church.

Read the full One Body One Faith letter here.