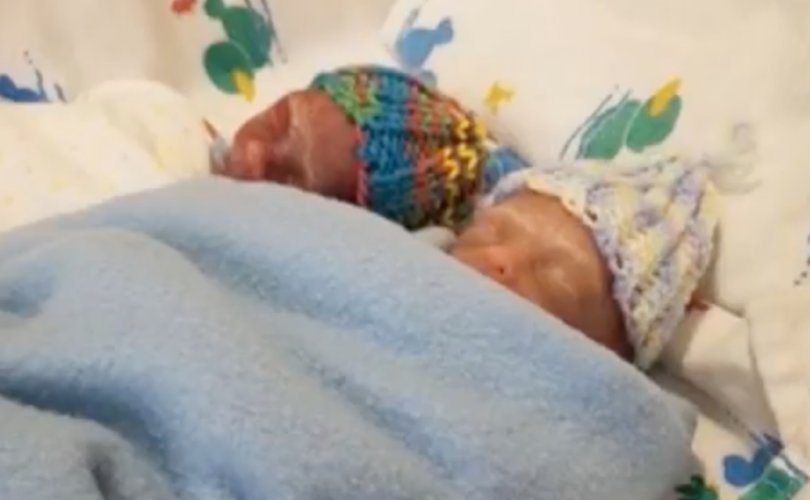 COLUMBUS, Ohio, May 23, 2018 (LifeSiteNews) – Twin premature newborn boys died at an Ohio hospital last year while staff stood by refusing to give them medical assistance, a pro-life group is reporting, and the hospital classified the boys’ deaths as stillbirth.

Both boys were born alive at 22 weeks and 5 days gestational age at Riverside Methodist Hospital in Columbus, according to the report.

The first born, Emery, survived for 45 minutes. His younger brother, Elliot, lived for two and a half hours, even crying, and his mother, Amanda, begged for help to no avail.

Amanda then says, “Look at him, please save him.”

Amanda is shown holding and speaking to her newborn boys in the video.

Amanda had been told by the hospital her boys would be stillborn or breathe only for a moment after birth, according to her statement included in the Created Equal report, but the video shows otherwise.

Additionally, an attending physician’s notes confirm the boys were born at 22 weeks, five days, the time at which many healthcare professionals say is the marker of viability.

“I was discharged with instructions for care after stillbirth,” Amanda said. “But Emery and Elliot were not stillborn. They were born alive and died as Riverside Methodist Hospital staff denied my pleas for help.”

The pro-life group released the video after attempts to have the incidents addressed internally were unsuccessful, the hospital calling the matter “closed.”

LifeSiteNews inquired with the hospital regarding its policy on determining when medical aid is provided to preterm babies. Media relations staff responded initially saying the inquiry was being submitted to leadership for women’s health at the hospital, but a response could not be guaranteed by press time.

While the video footage is heartbreaking, Created Equal Director Harrington said it represents just a portion of Amanda’s appeals to Riverside Methodist staff save her children.

“She pleaded with them many times before and after birth to aid the babies,” Harrington told LifeSiteNews.

Harrington said as well that some of Amanda’s paperwork had been changed, and the boys’ ages were scratched out.

“Which makes me think they needed to cover their tracks,” Harrington said.

“There is evidence that Amanda’s children were either right at the limit or below when it comes to receiving care,” he said. “Determining the age of a preborn baby is not an exact science. Still, the staff should have erred on the side of life, being that the children were apparently born at 22.5 weeks, even though the age put on the paperwork is disputed.”

'We consider this matter closed'

Created Equal had assisted Amanda in filing a complaint with OhioHealth’s Ethics and Compliance office, but the group said those efforts were rebuffed.

“The ethics and compliance department has investigated and addressed the concern brought by the caller,” the hospital compliance office said in its response. “If further incidents occur, please notify compliance line or local management …. We consider this matter closed.”

“Hospital regulations and rules don’t take into the account the human factor,” said Harrington. “I understand that hospitals need to limit when to use their resources to save a premature baby, but the cold and calculated way the staff disregarded the pleas of Amanda is outrageous.”

“Rules should be guidelines,” he said, “but not black and white determiners of life and death.”

They can feel pain, they could live

“We need to be consistent and save premature babies born alive below 22 weeks gestational age,” he added.

To date, there has been no real recognition from the hospital of the incident, according to the Created Equal report, nor condolences communicated to the grieving family.

“The family is very disturbed by what happened,” Harrington told LifeSiteNews.

Amanda, the boys’ father Shaun and others, continue to grieve the loss of Emery and Elliot, he said, and they are greatly concerned for others to whom similar incidents may occur. While they do want justice, the family’s last name is redacted for their privacy.

OhioHealth is a non-profit, charitable healthcare system of the United Methodist Church. Based in Columbus, it consists of 10 hospitals, more than 200 ambulatory sites, hospice and other assorted health services throughout a 47-county area.

Amanda went to Riverside Methodist Hospital on June 24, 2017 with bleeding, concerned for her twins. She was at 22 weeks, 2 days in her pregnancy.

Hospital staff informed her that if she delivered prior to 22 weeks, 5 days gestation, there’d be no assessment of her boys and no attempt to resuscitate them.

Despite making it to that critical point in gestation set out by the hospital, Riverside Methodist staff still told Amanda as she labored the boys were coming too early and that its neonatal intensive care unit would not attempt to aid the boys.

“Emery was born first,” Amanda said. “No medical team member was present. He landed on the edge of the bed.”

“My mother demanded assistance from the nurse’s station,” she continued. “A neonatal doctor did come in, but just wrapped Emery in a blanket, put him under a heat lamp, and opened his mouth.”

“Emery did not merely “breathe for a moment,” said Amanda. “He survived for about 45 minutes before passing away without any assistance from hospital staff.”

A couple of hours later, she began to contract again. This time, a doctor delivered Elliot, cut the cord, and laid him on her chest.

“Elliot was bigger than Emery,” Amanda recalled. “Not only was he breathing, like Emery, but he was also crying. But no one assessed his needs. He lived for two and a half hours while they did nothing.”

“In fact, I had been told previously they would not help if the babies were born before 22 weeks and 5 days. Documentation shows I was admitted at 22 weeks 2 days and the babies born at 22 weeks 5 days,” Amanda said. “Nevertheless, when I begged for help, they refused.”

Harrington points to a 2015 study by the New England Journal of Medicine that says babies born at 22 weeks have a greater probability of survival than was previously thought – provided they are given assistance.

The study’s lead author, Dr. Edward Bell, a pediatrics professor at the University of Iowa, told The New York Times at the time that he considers 22 weeks the new standard of viability.

“That’s what we think, but this is a pretty controversial area,” Bell said. “I guess we would say that these babies deserve a chance.”

At the time of the 2015 New England Journal of Medicine study, a Newsweek report on the study said there are about 5,000 babies born at 22 weeks in the U.S. each year.

Created Equal also cited a number of cases where children younger than Emery and Elliot were given assistance after their births and lived.

Harrington told LifeSiteNews incidents like what happened with Amanda and her boys are occurring elsewhere, and he believes they are the result of the Obamacare healthcare law. While this is the first case he’s aware of with this hospital, Harrington said he’s certain the case is not unique.

He cautions people not to trust the medical profession will always have you or your family’s best interest in mind.

“The tragic story of Amanda and her twins Emery and Elliot is not an isolated incident and is taking place in hospitals across America,” he said. “Amanda just happened to capture this incident on film.”

Listen to an interview with Melissa Ohden, who miraculously survived an abortion. Ohden recently shared her incredible story, including how she met her birth mother decades later, with Jonathon Van Maren on The Van Maren Show, LifeSite's new weekly podcast.