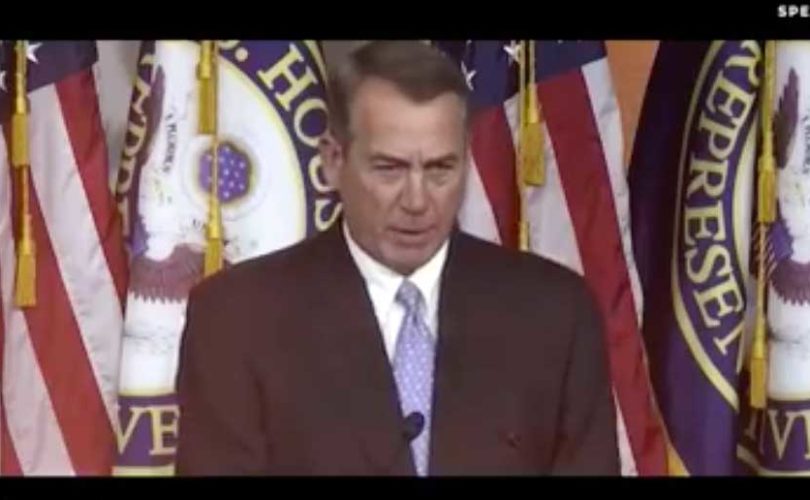 WASHINGTON, D.C., September 10, 2015 (LifeSiteNews) — House Speaker John Boehner (Republican, Ohio), says a Planned Parenthood funding fight that shuts down the government won't help the pro-life cause — even as Republicans debate how to most effectively end taxpayer funding of Planned Parenthood.

According to Politico, yesterday's closed-door session of House GOP lawmakers focused on whether to attach a defunding measure to a budget bill next week. Some GOP leaders want the measure attached to force Democrats into a tough vote, but others are concerned Senate Democrats and President Obama will simply shut down the government by not backing a budget unless it sends hundreds of millions of taxpayer dollars to the abortion giant.

A budget must be passed by October 1, or parts of the federal government will shut down.

The meeting was the first since Congress returned to Washington this week after the traditional month-long August recess. The House debate closely mirrors that seen in the Senate, where GOP presidential candidate Ted Cruz of Texas is pushing for a defunding measure to be attached to any budget resolution.

One major difference between the chambers is that 28 House Republicans have adopted an uncompromising position in favor of defunding America's largest abortion company. In the Senate, Cruz is largely taking up the fight alone, with many of his colleagues accusing him of acting only in his political self-interest since Senate Republicans cannot overcome a Democratic filibuster or a veto by President Obama.

‘Get this bill to the floor of the House and pass it!’ Pro-life protesters demand action outside John Boehner’s offices