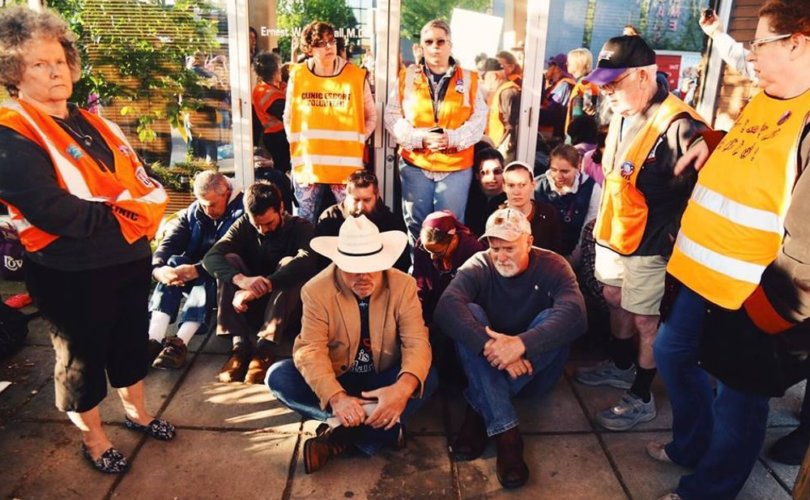 LOUISVILLE, Kentucky, July 27, 2017 (LifeSiteNews) — The US Justice department will not pursue imposing a “buffer zone” outside Kentucky’s last remaining abortion clinic after the clinic owner testified in court that a pro-lifer hugged her while on the job.

“In Louisville, the sidewalk counselors have been nothing but peaceful,” he told LifeSiteNews. “To be honest, they have given the Lord a good name,” he added.

The federal justice department applied for the order just before the Texas-based Operation Save America’s week-long National Event began in Louisville on July 22.

An estimated 700 people are currently in Louisville for the pro-life event. The event includes pro-life witness at EMW Women’s Surgical Centre, and rallies in front of the courthouse, all for the stated purpose of bringing political pressure to shut down the abortion center.

Eleven members of Operation Save America (OSA), including a minor, were arrested in May for blocking the doors of the abortion facility. Ten now face civil charges under the federal Freedom of Access to Clinics Act, or FACE.

The US government’s case for a preliminary injunction that would ban any of the group’s activities near the abortion clinic fell apart Monday, according to Heuser. The lawyer is representing three OSA defendants, including 82-year-old death camp survivor Eda Edl and OSA director Rusty Thomas.

Heuser said that Justice Department lawyers’ arguments for imposing a buffer zone at the abortion clinic were derailed after the clinic’s executive director Anne Ahola gave her testimony.

Her testimony “changed the tone of the hearing,” Heuser told LifeSiteNews.

Ahola testified that Operation Save America’s Rusty Thomas came into her clinic and “shared love of Jesus and she came out of the secure area of the clinic to talk face to face with him and they exchanged a hug,” related Heuser.

That convinced department of justice lawyers that the “preliminary injunction was not going to happen” so they withdrew the motion, he said.

When the original temporary restraining order expires Friday, no buffer zone will be in effect at the abortion clinic.

But it’s not a home-run for the pro-lifers yet. The City of Louisville is considering its own municipal buffer zone. And its public safety committee has already held two hearings on the matter, according to Tony Hyatt, spokesman for the city council’s 17-member Democratic majority caucus.

“I have always counseled that our pro-life efforts should be courageous, compassionate, and civil and that activities at abortion clinics be conducted in a prayerful, peaceful, and respectful manner that includes respect for just laws,” Kurtz said in a message to the July 19 committee meeting.

The archbishop said the goal is to “support the mother and child whenever possible.”

Hyatt, the city’s spokesman, told LifeSiteNews no buffer zone ordinance has been drafted at this time.

“I think we’re going to see how the federal buffer zone works to see whether or not we move forward with it,” he said.

But Heuser told LifeSiteNews that a Louisville municipal buffer zone ordinance would not likely stand up in court.

“I think they’d be wasting our community tax money to try to do what the federal court decided wasn’t necessary,” he said.

Heuser said that buffer zones have been getting smaller and smaller with appeal court rulings.

“The department of justice under Obama was so rabidly in favor of abortion that they wanted to create zones around abortion clinics like they were somehow sacred,” he said.

“The courts have rejected that over and over,” he added.

Pro-life protesters arrested at the last abortion clinic in Kentucky