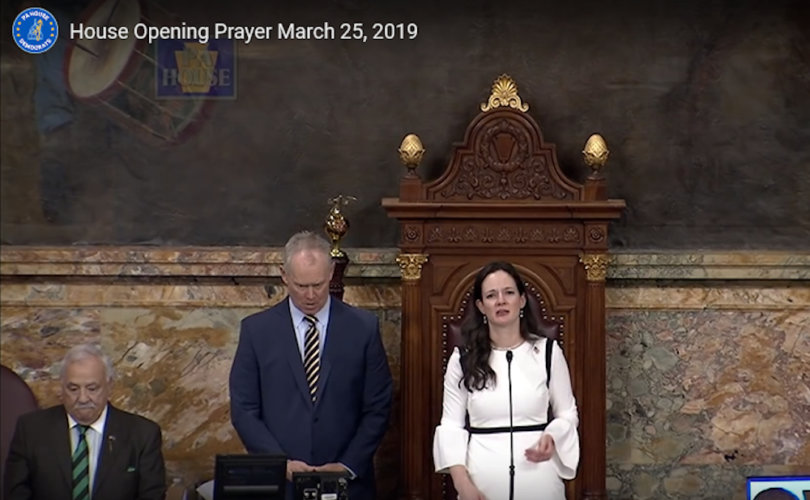 HARRISBURG, Pennsylvania, March 27, 2019 (LifeSiteNews) – Pennsylvania state Rep. Stephanie Borowicz has been targeted by Democrats and Muslims for alleged “Islamophobia” after she offered Christian prayer in the Pennsylvania House of Representatives. She prayed moments before the swearing in of the chamber’s first Muslim woman.

Borowicz, a freshman Republican from a rural Pennsylvania district, invoked the name of Jesus more than a dozen times during nearly two minutes of prayer in the chamber on March 25. She also thanked God that President Donald Trump occupies the White House, because he “stands beside Israel, unequivocally.”

“Jesus, you are our only hope,” Borowicz prayed.

Minutes later, Democrat Rep. Movita Johnson-Harrell, the first female Muslim legislator in the state, was sworn in on a Koran. Responding to Borowicz’s prayer, Johnson-Harrell said that for most part “the entire invocation was offensive.” The Democrat from Philadelphia added that “to use Jesus as a weapon is not OK” and “we cannot weaponize what’s going on with Israel and Palestine.” Democrats and Republicans, she said, should not fight about prayer.

Claiming that the prayer was an example of blatant “Islamophobia,” Johnson-Harrell said,  “It was directly a political statement, and I think we need to be very, very clear that everybody in this House matters, whether they’re Christian, Muslim or Jew, and that we cannot use these issues to tear each other down” A Muslim prayer was read from the dais of the chamber as part of her swearing-in. The hijab-wearing Johnson-Harrell said in a video that she seeks to be a model for “covered” women and girls.

I came to the @PaHouse to make friends on both sides of the aisle because we need to work together for EVERYONE across the commonwealth. After hearing the prayer given the day I took the oath of office, it’s clear that my presence is needed now more than ever #PeopleFirst pic.twitter.com/dK4I7gO9aY

Pennsylvania Gov. Tom Wolf, a Democrat, said he was “horrified” by Borowicz's prayer. A Methodist, Gov. Wolf stated that the state was founded on the “basis of freedom of conscience.” Citing his “strong spiritual sense,” he said Borowicz’s prayer was not a “a reflection of the religion I grew up in.”

Video in the chamber recorded Borowicz, who began her invocation saying, “I, Jesus, am your ambassador here today, standing here representing you, the King of kings, the Lord of lords.” Proclaiming that the Founding Fathers sought to based the country on “your principles, and your words, and your truths,” she prayed, “God, forgive us. Jesus, we've lost sight of you. We've forgotten you, God, in our country. Jesus, you are our only hope.” Reaching the end of her prayer, Borowicz said, “At the name of Jesus every knee will bow and every tongue will confess.”

When some voices in the chamber became notable, House Speaker Mike Turzai, a Republican, touched her elbow, Borowicz brought her invocation to an end with “Amen.”

State Rep. Jordan Harris, a Democrat, professed his Christian identity but condemned Borowicz for her “divisive” opening prayer. He tweeted March 25, “Prayer should never be weaponized, especially on a celebratory day” for Rep. Johnson-Harrell. He wrote that the prayer was “deeply disrespectful” and intended to intimidate the Muslim legislator and her family.

Today we're swearing in the 1st Black Muslim woman to the PA General Assembly. To honor the occasion @RepTurzai invites the most inappropriate, racist, islamophobe to ramble a “prayer” thanking Trump, Jesus, and Israel. Most inappropriate thing ive witnessed in my 4 months

The Philadelphia office of the Council for American-Islamic Relations, an unindicted conspirator in the conviction of the Holy Land Foundation’s support for Islamic terrorism, called for the state legislature to censure Borowicz, claiming that she engaged in anti-Islamic and anti-Jewish speech. CAIR-Philadelphia executive director Jacob Bender said in a statement that Borowicz had delivered a “thinly-veiled attack on the Islamic faith of Rep. Johnson-Harrell that failed to meet even the most minimum standards of mutual respect and religious tolerance.” He was joined by Rep. Harrell-Johnson in demanding censure.

For her part, Borowicz said she will not apologize for praying. In a statement that followed her speech, Borowicz wrote, “I was scheduled to pray, so I prayed how I pray almost every day. If a lawmaker who is a Christian can no longer stand in a general assembly in America — when there are Bible verses inscribed all throughout our beautiful state Capitol — and pray to Jesus without ridicule, then we are no longer free.”