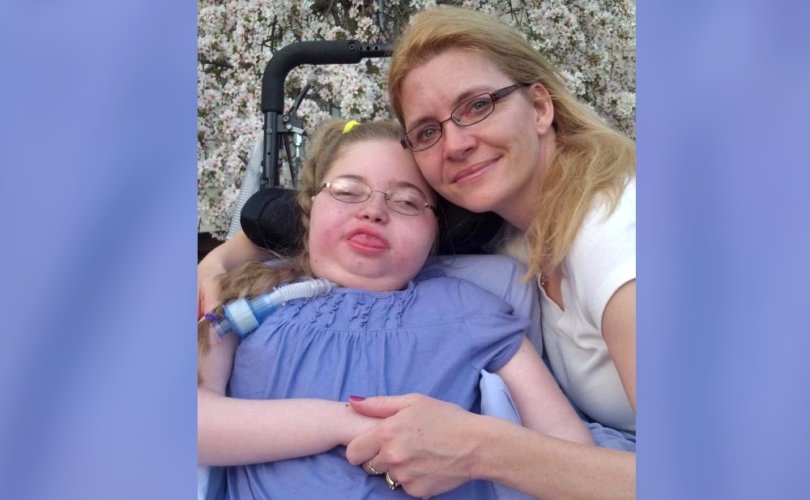 DEARBORN, Michigan, May 4, 2018 (LifeSiteNews) – The mother of a U.S. child with an undiagnosed medical condition somewhat like U.K. toddler Alfie Evans said the “courts and hospital killed Alfie,” adding that “morally, a grave sin took place.”

Salter is devastated by Alfie’s plight, telling LifeSiteNews it was frightening for her to watch what happened to Alfie – a child she said was perfectly created in the image and likeness of God – just like her daughter Meghan.

Governments, courts, hospitals or doctors that try to deny families’ rights when they want to care for a loved one must be called out, Salter said as well. Along with this, Salter said the best thing for people to do now is pray and continue to support Alfie’s family.

Alfie Evans died in a UK hospital last weekend after his parents Tom Evans and Kate James lost battle after battle in courts to keep him alive on life-support. The hospital removed Alfie's ventilator expecting him to die quickly, but he started breathing on his own and survived for five days. A nurse allegedly gave him four drugs hours before he died on April 28.

“It is frightening at the very least,” Salter said.

“To watch from afar, and not be able to testify in court on the behalf of Alfie pained my heart,” she said. “I so wanted to be with the family to testify on behalf of Alfie. If I could have flown to the UK, I would have.”

“Meghan is a soul perfectly created just like Alfie – in the image and likeness of our Creator,” said Salter. “Meghan is unable to move, speak, eat or breathe on her own. She has been on life support for 15 years. Some feel she is unworthy to live, and we have had to defend her life as well.”

Salter said her daughter is able to smile through the grace of God, and Meghan radiates great joy to all those who meet her. People are drawn to Meghan’s simple, beautiful soul, she said.

“Because her body does not function as most others do, does not give another human being the right to devalue her life,” Salter told LifeSiteNews. “Meghan, Alfie, and all other special needs individuals deserve the right to live, and not be murdered by the hospitals and court system whose very job it is to protect each and every one of its citizens.”

“We are all created in the image and likeness of God,” Salter continued. “Meghan is loved by people around the world just like Alfie!”

Meghan has an undiagnosed condition. She was born perfectly healthy in October 2002, Salter explains, but she became weak a few months after birth.

Her daughter had multiple seizures and physical collapses requiring her to be airlifted to the hospital several times. Meghan would then become unable to physically move, eat or breathe on her own. At five months old, she was given a tracheostomy and put on a ventilator. By six months old, she had a feeding tube surgically placed into her stomach to provide her daily nourishment. A full week of tests at the Mayo Clinic in Minnesota brought a declaration from doctors that Meghan was “a medical mystery.”

Meghan is completely dependent upon her family and the grace of God, her mother says. Meghan’s story is detailed on the Meghan’s Miracles webpage.

Meghan remains undiagnosed and lives at home in Dearborn, Michigan. She is the youngest child of Salter and her husband of 26 years, Mike, and sibling to Lauren, 24, Michael, 22 and Shannon, 19.

Meghan is a blessing

“We had prayed to our God to be blessed with children in our marriage,” Salter told LifeSiteNews. “We didn't put a condition on accepting a healthy or special needs child. We always remained open to any life God would entrust and bless our lives with.”

Through the hardships, the family learned to completely depend on God for everything, she pointed out.

“Our family considers Meghan a gift from Jesus,” Salter said. “He showers us with all the graces needed to care for this sweet disciple of Christ.”

“Contrary to what others in society might think, our family has great joy, as we know the true value and gift of every soul,” Salter stated. “Meghan has taught us strength in her weakness and how to lay our lives down for Christ.”

Salter’s experience with Meghan has brought her to be an advocate for life, speaking for the last 13 years to both school-age children and adults on a wide range of pro-life topics.

She shared with Dr. Ray Guarendi recently on EWTN’s Living Right with Dr. Ray television program how Meghan has been the inspiration of a number of people’s conversion to the Catholic faith, without having said a word.

She radiates love; she is saving souls

“Meghan radiates love,” Salter told LifeSiteNews. “She teaches the world the value of each soul. She is saving souls through her work for Christ. Without speaking a word, she has brought countless souls to Christ.”

The Salter family “is absolutely devastated on many levels,” by Alfie’s case, Salter said, and they are mourning his loss along with people around the world.

Salter extended condolences to Alfie’s parents, Thomas and Kate, and commends the “truly remarkable” dedication and courage they have shown the world.

“We have great admiration for them both,” said Salter. “We are so very sorry.”

Salter had reached out to Alfie’s parents with a few private messages on Facebook.

“I offered support and told them about our daughter Meghan so that they knew the depth of our broken hearts, and willingness to help,” she recalled. “I offered our prayers most of all. I shared with them that I know God has them wrapped in His loving merciful heart.”

Salter explained that what is crucial is that they know that Jesus loves them and they are being prayed for.

She does not mince words about how the British courts failed the toddler and his family.

“I stand firm that the legal system failed Alfie, his family and the world who lost this little boy,” Slater stated. “They had an agenda to kill Alfie and they were going to see it to completion.”

“He was not dying,” she continued. “His organs were all working. From what I understand, he had an undiagnosed medical condition, much like Meghan, that's all.”

“Morally, a grave sin took place. The courts and hospital killed Alfie because all he needed at this point was food, water and air to breathe, and they clearly denied him those basic necessities. This was morally wrong on all levels.”

The Salters learned early on with Meghan that mechanical ventilation to help sustain life is morally and ethically appropriate when death is not imminent from a disease or other injury.

“Obviously, Alfie was not yet at that stage because the ventilator was keeping him alive,” she pointed out. “Because he was undiagnosed, the doctors could not say how long he could or would live on the ventilator.”

Salter noted, as have others, how Alfie’s prognosis was completely wrong because he survived days after being removed from mechanical ventilation.

She recalled being told by a neurologist at one point when Meghan was eight months old that her daughter would not live another two weeks, and also that, “It's best to just pull her off the vent and get on with your lives.”

“Her educated opinion was undeniably incorrect,” said Salter. “Fifteen years later, Meghan is still with us.”

Could this have been my child?

“If we were in the UK,” she said, “I fear Meghan would be subject to the same fate as Alfie.”

The medical system was set up to help care for and possibly cure patients of all ages, Salter said.

“Now, they take lives into their own hands and believe it is the right of the doctor to desired who lives and who dies,” she said, calling the fact the hospital didn't even feed Alfie for 28 hours “unthinkable.”

Salter “strongly believes” Alfie’s parents had the right as his parents to take Alfie to Italy or home, and says the hospital’s contention that he was at “risk for seizures” and a flight “could be harmful to his health” was simply contradicting the goal to end his life.

“The bottom line is that they felt Alfie was better off dead than alive and they were going to make a mockery out of his life due to his disabilities,” she said.

Salter said she believes the UK government was trying to set a precedent with Alfie, to set the stage for government-directed universal healthcare “death panels.”

“I have a hard time imagining the pain and devastation for Alfie's parents,” Salter said.

Prayer is the best gift one has to offer at this point to support Alfie’s family, she added.

“Besides prayer, I believe that the world has to stand strong, united in the protection of all life from our unborn brothers and sisters until natural death,” she said. “A world that does not value life at conception, by dismembering the youngest of human beings, will never value the God-given gift of any soul.”

“We must call out governments, courts, hospitals and doctors throughout the world who dare try to take away the rights of those who want to care for a family member or loved one,” she said. “The government has no place stripping family rights and dictating which family members live or die.”

“This is how we can honor Alfie's life,” said Salter. “I encourage others to hold prayer vigils and continue to send the family support through the website set up for Alfie.”