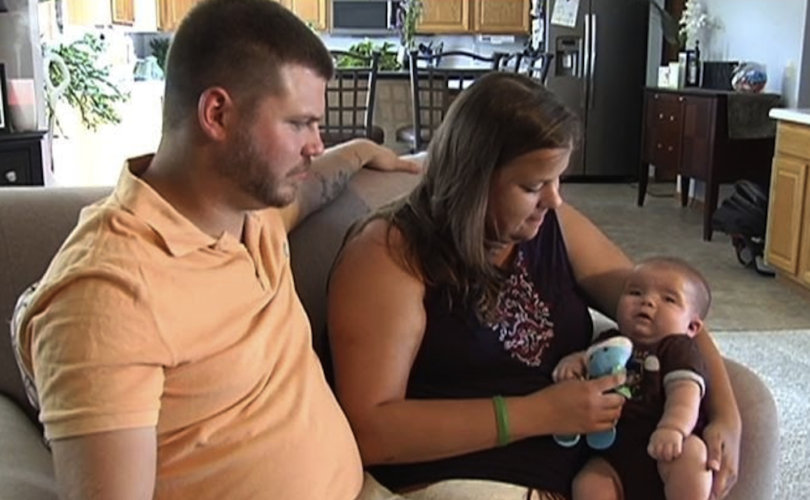 TEXAS TOWNSHIP, Michigan, August 2, 2017 (LifeSiteNews) – The parents of a four-month-old Michigan boy with the same rare condition as Charlie Gard say they want to fight for their child to live.

Russell Cruzan III’s parents are fighting to get their son treatment that could save his life, WoodTV-8 reported, despite a grim prognosis from doctors.

“‘We know the seriousness of this diagnosis. We know what the prognosis is,” his mother, Michelle Budnick-Nap, recounted doctors telling her. “Do you want to keep fighting or do you want to give up and let nature take its course?'”

“Which is a really, really hard thing to hear,” Budnick-Nap said. “But I always tell them … we want to do everything we can. We want to fight.'”

She and her husband hope to get Russell treated by a Boston Children’s Hospital doctor who is one of the top specialists in Russell’s condition. The physician has agreed to treat their son, but the family faces challenges with insurance covering the treatment.

They hope for a good outcome, whatever that might mean.

“If anything, if they can’t save him or whatever, maybe he can be used to save kids in the future,” Russell Cruzan II said.

The British toddler died last week just shy of his first birthday after his UK hospital had refused to treat or allow him to be transported for treatment.

A major legal battle between Great Ormond Street Hospital and Charlie’s parents resulted in precious time lost for Charlie. Despite having another doctor willing to treat him and his parents raising enough money to transport him to the U.S. for help, the hospital refused to release the child. The hospital rebuffed a petition, protests from members of European Parliament, and verbal intervention from Pope Francis and U.S. President Donald Trump.

Charlie’s parents ultimately gave up after it was determined Charlie would no longer benefit from treatment. His ventilator was pulled and he passed away. The case ignited international controversy around both the right to life and parents’ rights.

Budnik-Nap and Cruzan first noticed something was wrong with their son in June when he failed to thrive.

“(We) kept asking the nurses why. Why is he not eating? Why isn’t he thriving?” Budnik-Nap said.

Russell’s condition worsened. He was dehydrated, lethargic and had a low body temperature, prompting a week of hospitalization.

The doctors treated his symptoms, but Russell was rushed back two days after his release from the hospital with severe respiratory problems. These led to pneumonia and a monthlong hospital stay.

Throughout, his parents had no answers. Then a kidney test result set off alarm bells.

“When those labs came back, the doctor called and she was like, ‘You need to bring him into the hospital right now,” Budnik-Nap said. “His labs are looking kind of crazy. We need to find out what’s going on.'”

So far, the family says their primary insurance may or may not cover some of the treatment. However, their secondary insurance will not cover the rest, and there will be travel costs as well.

Russell’s type of mitochondrial depletion syndrome can cause loss of muscle mobility and strength, diminished kidney function and inability to swallow.

The treatment his parents hope to get him in Boston would help Russell’s healthy mitochondria replicate.

A YouCaring page has been set up to help cover medical costs.

“It’s really hard to be told that your child’s chances of even making it to 2 are like 50 percent,” Budnick-Nap said. “I don’t want to say that we’ve come to terms with it. We love him more than anything in the world.”