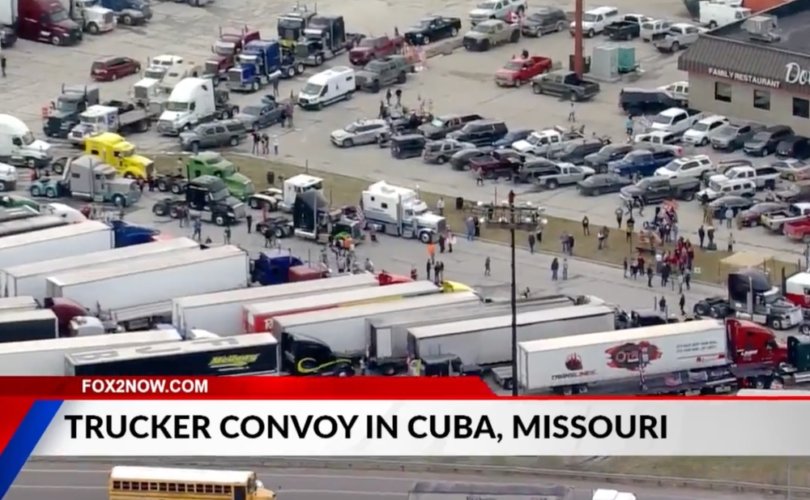 (LifeSiteNews) — The U.S. cross-country trucker convoy, which was organized to call for an end to all authoritarian COVID mandates and restrictions, is on track to reach the outskirts of Washington, D.C. as planned on March 5.

After passing through Texas and Oklahoma over the weekend, the so-called “People’s Convoy,” which began in southern California on February 23, reached Cuba, Missouri for an overnight stay Monday night.

The truckers will then cross through Illinois, Indiana, Ohio, Pennsylvania and Maryland before reaching the Capital Beltway, a 64-mile stretch of the interstate highway that encircles Washington, D.C., on Saturday, March 5.

Modeled after the Canadian Freedom Convoy, which generated international attention for opposing Canada’s authoritarian COVID-19 mandates and lockdowns, participants in the American convoy hope to bring an end to the state of emergency declared in response to the coronavirus and instigate the curtailment of all remaining mandates, restrictions, and COVID-related requirements in the U.S.

“To our elected officials that believe they rule us: YOU work for US,” the convoy’s organizers stated on their website.

“Our [C]onstitution was written to provide enough power to act on a national level, but not enough to deprive the people of fundamental rights,” the organizers continued. “The people are prepared to see this challenge through — as we have seen through all challenges to our Freedom in the past. And we will prevail and prosper.”

The “People’s Convoy” has specifically named their “brave and courageous neighbors to the North,” i.e. the Freedom Convoy participants in Canada, as the inspiration for the cross-country protest.

The Epoch Times reported that the convoy, which began with roughly 150 vehicles when it set off from California, has since grown to over 250 vehicles as it passed through Texas and Oklahoma over the weekend.

Along the way, the truckers have been met with supporters waving American flags and holding up signs alongside the roadway and on overpasses.

A recent poll conducted by the Trafalgar Group found the convoy has generated the support of a whopping 78.5% of Republicans and 68.6% of independents, Newsweek reported.

Many of the truckers and their supporters have explicitly named coercive COVID jab mandates as one of their principal complaints, arguing that being pressured into taking an experimental drug is a violation of their bodily autonomy.

“It shouldn’t be a forced issue, it should be something we voluntarily do,” truck driver George Robinson Jr. told a Tulsa, Oklahoma ABC affiliate.

Photographs posted on the People’s Convoy Facebook page show an extensive cavalcade of semi trucks and other vehicles packing a single lane on the freeway to permit free passage by other vehicles.

While the convoy appears large, it’s unclear exactly how big it is.

The Epoch Times reported that other vehicles “have joined for stretches of time,” some for as few as 30 miles and others for as many as 200 miles, making it “difficult to pinpoint exactly how many participants [the convoy] has.”

Reports also indicate that groups of trucks starting in other states have joined the convoy at intervals along the way.

Federal authorities have responded to the advance of the trucker convoy by reinstalling fencing around the Capitol and calling in National Guard units, including 700 troops and 50 large tactical vehicles.

The militaristic moves come in spite of the fact that the trucker convoy has no plans to enter the actual city, but merely intends to drive the Capital Beltway before disbanding.

Moreover, in videos and posts published to social media websites, the convoy’s organizers have made clear the protest is peaceful and nonpartisan, and merely seeks to call for an end to COVID-19 mandates and restrictions throughout the U.S.

Leader Of Trucker Convoy To DC Has A Message For Biden: ‘End The Mandates’ https://t.co/uSUyqH0UTh via @dailycaller

Supporters of the convoy promote the coming together of blue-collar workers to stand up for the rights of all Americans to make their own medical decisions.

Some conservative commentators, however, including The Daily Wire’s Matt Walsh, have suggested the trucker convoy could do more harm than good as the White House sets up fencing and deploys National Guardsmen in apparent anticipation of conflict.

Many worry about a repetition of the authoritarian actions undertaken against Canada’s Freedom Convoy.

Earlier this month, the Canadian trucker convoy in Ottawa was met with an extreme police response and the invocation of the Emergencies Act by Prime Minister Justin Trudeau for the first time in Canadian history, despite the fact that the protests were markedly peaceful.

Before being swiftly revoked after bipartisan backlash, the Emergencies Act nonetheless enabled the federal government to freeze the bank accounts of the truckers and their supporters without due process.

Meanwhile in the U.S., unlike in Canada, some of the deepest blue states and cities have already rolled back their COVID mandates and scrapped their vaccine passport schemes far in advance of the trucker convoy’s launch last week.

Even the U.S. Centers for Disease Control and Prevention (CDC) pulled back its guidance on mask mandates, leading some to wonder whether the cross-country trucker convoy is necessary.

Despite the local lifting of mandates, however, President Joe Biden recently extended the two-year national state of emergency, a major point of contention for the U.S. trucker convoy, beyond March 1, 2022.

“There remains a need to continue this national emergency,” Biden wrote in a letter to Speaker of the House Nancy Pelosi on February 18. “The COVID-19 pandemic continues to cause significant risk to the public health and safety of the Nation.”

Meanwhile, there remains concern that although many local mandates are currently being lifted, vague wording and dependence on COVID case and hospitalization numbers could mean the liberty-crushing COVID measures could be swiftly reimplemented if they are again determined necessary.