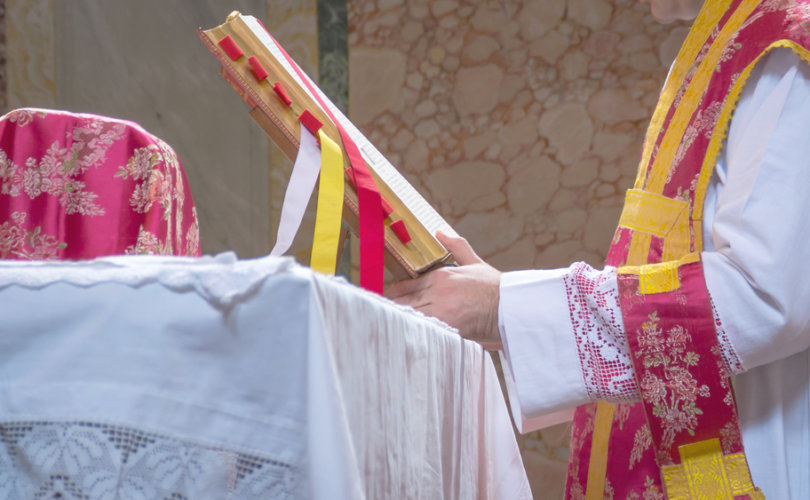 A priest saying the traditional rite of the Catholic massShutterstock.com

July 2, 2018 (LifeSiteNews) – Warning that marriage, family, and gender are being “reinvented and distorted,” U.S. Catholic priests are expressing their “total acceptance” of the Church’s teaching against contraception and urging fellow clerics to join them.

This year is the 50th anniversary of Humanae Vitae, Pope Paul VI’s encyclical reaffirming Catholic teaching against artificial contraception. The Confraternity of Catholic Clergy’s U.S. chapter has united in support of the landmark encyclical that defied the sexual revolution and articulated natural law.

“Since 1968, dissent from this official teaching among some theologians and non-adherence among many people have precipitated the dire predictions of the pope that promiscuity, pornography, divorce, remarriage, artificial conception and unnatural intercourse, would proliferate,” the priests explain on LifePetitions, LifeSiteNews’ petition platform for pro-life and pro-family activists. So far, their appeal has 47 signatories.

Many priests openly rebelled against Humanae Vitae when it was released. Clerical opposition to the Church’s prohibition of contraception, which festered quietly and seemed to dim during the pontificates of St. John Paul II and Benedict XVI, has resurged under Pope Francis. A new member of the overhauled Pontifical Academy for Life Father Maurizio Chiodi, has even used Amoris Laetitia to argue that some circumstances “require” contraception.

“Blessed Paul VI solemnly reaffirmed the perennial doctrine that conjugal love is essentially and necessarily oriented to love and life,” the American priests write. “Furthermore, all sexual acts outside of marriage or those not disposed to unity and procreation are intrinsically evil and are therefore always sinful.”

“Contraception has infected society with a culture of death that sees abortion not as the murder of innocent unborn, rather as a mere personal choice,” they continue. “We recommit ourselves to defending Humanae Vitae as it is based on the immutable Natural Moral Law and the Magisterium of the Church.”

The priests of the confraternity say they “fear the intrusion of the state and secular powers to interfere with Divine Justice by promoting and even compelling acts against the sanctity of life, marriage, and the family.”

Developing countries often only receive Western aid money on the condition that they promote contraception, something the faithful Catholic priests condemn in their new petition: “We repudiate the efforts by governments and other institutions to compel people, especially those in need, to embrace a contraceptive mentality and attitude as a prerequisite to receiving charitable assistance.”

In June, nearly 500 British priests issued a similar statement upholding Catholic doctrine against contraception, saying what it offers is “key to the healing and true development of our society.”

“We urge and exhort our ordained brothers as well as all the faithful to reacquaint themselves and those under their care with [Humanae Vitae] and vigorously defend it and implement it for the common good of humanity itself,” the U.S. priests conclude.

Pope Francis is scheduled to canonize Pope Paul VI, who oversaw and approved the radical changes to the Catholic Mass a half-century ago, on October 14.

The revolt against Humanae Vitae continues to haunt us today

Theologian: Here’s how Pope’s teaching is being used to reject Humanae Vitae