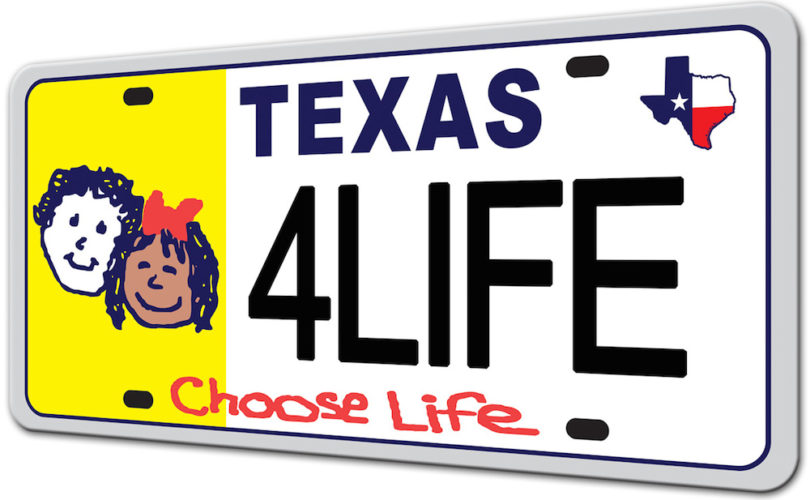 WASHINGTON, D.C., February 26, 2015 (LifeSiteNews.com) — Since the year 2000, Americans have been able to express their pro-life views on specialty licence plates in only some states, so now a Chicago religious and pro-life rights advocacy group is appealing to the U.S. Supreme Court to end the confusion and declare the First Amendment applies everywhere.

The Thomas More Society, a non-profit law firm that defends life and religious and family rights, has fought secularist foes such as the American Civil Liberties Union in several states over the issue, but this time is acting as amicus curiae, or “friend of the court,” for its pro-life clients in a case involving the Texas Sons of Confederate Veterans and that state’s licencing agency.

The society is asking SCOTUS to rule broadly enough in a case that it will protect the free speech rights of pro-life groups too—and others besides.

“The forum of specialty plates should include all speech,” stated the society’s special counsel, Steve Crampton. “Currently, some states allow Choose life specialty plates while other states censor them. All drivers who wish to purchase Choose Life specialty plates – to express their personal views about an important societal issue – should be allowed to do so.”

There is money involved too. Over 950,000 Choose Life plates have been sold by pro-life groups and pregnancy centers in 29 states and the District of Columbia, raising $21 million. “Millions of dollars for pregnancy centers as well as a powerful means of pro-life advocacy are at stake here,” said Thomas More Society president Tom Brejcha. Most states allow such plates as a fundraising device for non-profit organizations while some, such as Wisconsin, Illinois, and North Carolina, reject controversial applicants.

Their justification: because state licences are government property they are available primarily for “government speech” and therefore can be denied at the government’s will to private groups. But the First Amendment, says the Thomas More Society, is designed precisely to protect the free speech of private individuals from the arbitrary actions of the State.

Taking a shot at Texas’ fundamental argument that its licence plates are reserved for government messaging, the society’s brief to SCOTUS notes that the licencing authority has approved specialty plates for graduates of Notre Dame, Alabama, and Mississippi Universities, as well as for RE/MAX realtors, “Texas Roadhouse restaurant, the Knights of Columbus, and various NASCAR drivers such as Jeff Gordon, Dale Earnhart, and Dale Earnhart, Jr.” Observes the brief: “It strains credulity to maintain that all these messages are the State’s.”

The Thomas More Society argues that the specialty licence plate fight is part of a larger debate over areas under government control that have in the past been deemed “public forums” such as parks and schools, where free speech in the form of protests and demonstrations has reigned supreme under the First Amendment but where government is now asserting a veto power.

Declares the society’s brief: “Under the State’s theory, it may transmute any expression occurring on or in any government-owned property or government-run program into ‘government speech’ which it can then veto.” Paradoxically, public space becomes a place to restrict free speech rather than the first place one would expect to find it under the Constitution.