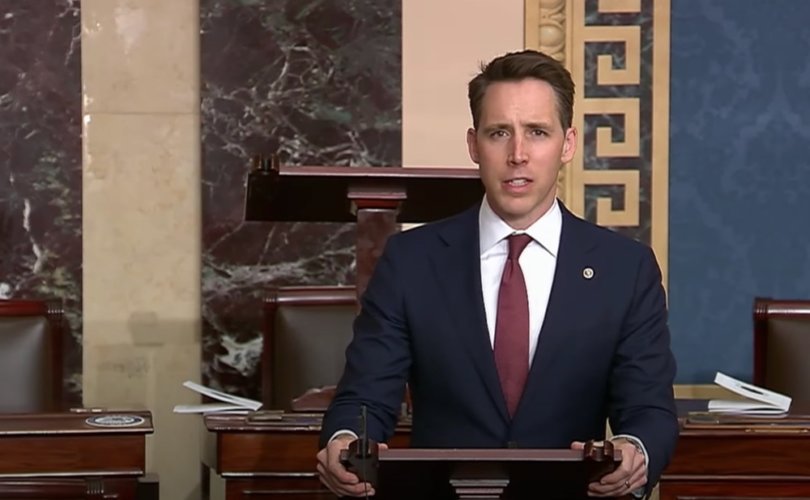 WASHINGTON, D.C., June 25, 2021 (LifeSiteNews) — A U.S. Senator sent a letter to the U.S. Commision on International Religious Freedom asking that it consider adding Canada to its watch list.

Republican Sen. Josh Hawley of Missouri wrote the June 24 letter in response to Canada’s crackdown on religious freedom. In his letter, he cited “numerous instances of Canadian pastors being arrested and jailed for holding worship services that do not comply with COVID-19 restrictions.”

“I am troubled that our Canadian neighbors are effectively being forced to gather in secret, undisclosed locations to exercise their basic freedom to worship,” Hawley wrote.  “Frankly, I would expect this sort of religious crackdown in Communist China, not in a prominent Western nation like Canada.”

“Canadian authorities’ arrest of faith leaders and seizure of church property, among other enforcement actions, appear to constitute systematic, ongoing, and egregious violations of religious freedom.” (FULL LETTER BELOW.)

Hawley was particularly moved by the June 15 arrest of Pastor Tim Stephens, whose children wept and clung to his hand after he was hauled into a police car. The evangelical minister was arrested for holding a prayer service outdoors, a gathering the police needed a helicopter to find. Although outdoor transmission of COVID-19 is very rare, the service violated Alberta’s COVID-19 restrictions.

Regarding her husband’s arrest, Raquel Stephens tweeted that the family’s faith remains firm.

“We are shaken, but our faith is not,” she wrote.

“We are sorrowful, but always rejoicing. As I prayed with the saints tonight, I couldn’t help but sense their joy at this opportunity to proclaim the excellencies of our Lord Jesus. In God’s providence, Tim’s imprisonment will strengthen us in the faith and embolden us to love and obey Christ, no matter the cost.”

Hawley also cited the arrest of Pastor James Coates of GraceLife Church in Spruce Grove, near Edmonton, Alberta, and the bizarre police blockade of the place of worship, which has led to protests and the community attending underground services.

The senator sent a copy of the letter to Canada’s Ambassador to the United States, Kirsten Hillman.

Countries currently on the U.S. Commision on International Religious Freedom’s watch list include Afghanistan, Belarus, Cuba, Egypt, India, Indonesia, Laos, Russia, Somalia, Tajikistan, Turkey, and Venezuela. According to the Commission’s website, the conditions for religious liberty in these countries “require close monitoring due to the nature and extent of violations of religious freedom engaged in or tolerated by the governments.”

In 2020, Hawley fought for Americans’ religious freedom during the coronavirus pandemic, when strict attendance limits were forced on places of worship, whereas such businesses as restaurants and gyms were allowed to operate at a 50 percent capacity. In September, he wrote to then-Attorney General William Barr asking him to file suit in federal court to protect religious freedom in states where the First Amendment was being violated.

“The American people have endured six months of closures and restrictions on their houses of worship,” Hawley wrote.

“Over that period, they have faced countless harms: missed holidays and religious celebrations, canceled weddings, and unattended funerals, to say nothing of the painful absence of regular worship. These continued violations of the First Amendment are outrageous. I ask that the Department file suit against these jurisdictions and others to uphold Americans’ rights.”

One of the most fundamental human rights is the freedom to practice one’s faith according to the dictates of one’s conscience. Last year, I urged the Department of Justice to bring federal lawsuits to uphold the rights of houses of worship burdened by unjust restrictions. Now I am writing to express my deep concern that this freedom is in peril across our nation’s northern border.

In recent months, there have been numerous instances of Canadian pastors being arrested and jailed for holding worship services that do not comply with COVID-19 restrictions. On June 14, Pastor Tim Stephens of Fairview Baptist Church in Calgary, who was previously arrested in May, was arrested again at home in front of his wife and children. Media outlets captured heartbreaking video of the pastor’s children sobbing as they held their father’s hand through the barred window of a police car. Pastor Stephens’ alleged violation was holding an outdoor worship service in a park, which was apparently discovered by a police helicopter flying overhead.

Other Canadian pastors, such as Pastor James Coates of GraceLife Church in Spruce Grove, have similarly faced arrests and enforcement actions. Authorities reportedly seized and fenced off the GraceLife Church building in April, which sparked a protest of hundreds of people in opposition to the move.

I am troubled that our Canadian neighbors are effectively being forced to gather in secret, undisclosed locations to exercise their basic freedom to worship. The Canadian Charter of Rights and Freedoms states that “[e]veryone has the following fundamental freedoms,” which include the “freedom of conscience and religion.” The arrests and actions taken to enforce overly burdensome and unjustified orders, however, do not seem to live up to this praiseworthy statement. Frankly, I would expect this sort of religious crackdown in Communist China, not in a prominent Western nation like Canada.

Canadian authorities’ arrest of faith leaders and seizure of church property, among other enforcement actions, appear to constitute systematic, ongoing, and egregious violations of religious freedom. I urge the Commission on International Religious Freedom to take whatever action is necessary to address and rectify this situation, and consider adding Canada to the Commission’s Watch List.

Thank you for your attention to this pressing matter.