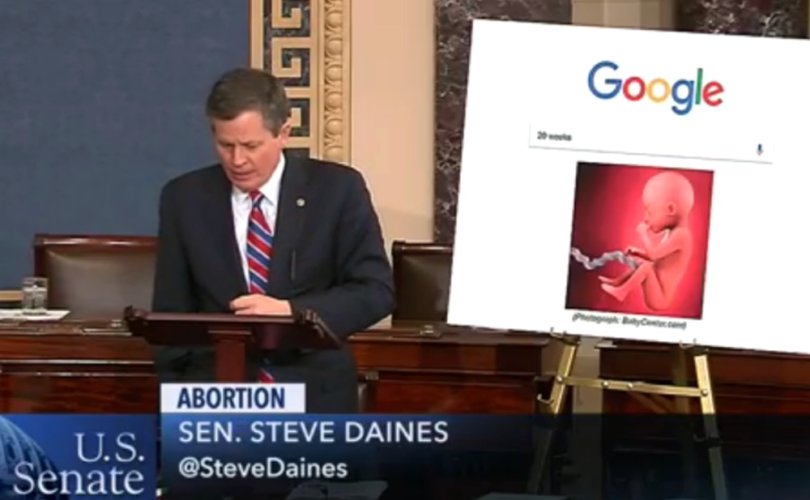 February 26, 2019, LifeSiteNews — In an impassioned speech from the floor of the U.S. Senate Chamber, a Republican senator pleaded with his Democrat colleagues to support the Born-Alive Abortion Survivors Act, designed to protect children born alive during botched abortions from being left to die.

“It’s absolutely absurd that we’re having to decide whether to give human babies the level of protection under federal law that we give to animals,” said U.S. Sen. Steve Daines of Montana in the closing moments before the vote was taken.

“Is it the position of the Democratic Party that a border wall is immoral but not infanticide?” asked Daines, a founding member of the newly formed Senate Pro-Life Caucus.

Though the bill failed to reach the necessary 60 votes for passage into law, Daines and several Republican colleagues made heroic attempts to convince those across the aisle to take a stand against infanticide.

“I want to be very clear about the matter that’s before the U.S. Senate here today. We are not here to debate abortion; that is not what this bill is about,” began Daines.  “We are here today to decide whether or not it should be legal in the United States of America to kill or neglect an infant who’s been born alive after a botched abortion.”

“By now we’ve all heard the disturbing defense of infanticide offered by the disgraced Governor Northam of Virginia,” said Daines. “These babies’ only crime was to survive the abortionists’ attempts to poison, starve, or tear them apart limb from limb while in utero.”

“What this bill is about is when the abortionist wants to ‘finish the job’ as the baby lies helpless on the table of an abortion clinic,” he added.

“Now currently, children that are born alive who survive an abortion attempt are recognized as persons, under the ‘Born-Alive Infants Protection Act’ of 2002, but that law is merely definitional, because not one person to date has been charged or convicted under it,” said the Montana senator. “There is no nationwide federal law criminalizing the actions of killers like Dr. Kermit Gosnell, who kill or deny care to babies who survive abortions.”

As Daines continued, he became more blunt, pointing out the “absurdity” of the U.S. Senate having to take a vote to protect newborns:

The bill that we’re voting on today would give federal enforcement ‘teeth,’ and it would be teeth nationwide to the 2002 ‘Born-Alive’ Law, so that whether an infant is born alive in Montana or Massachusetts, whether in a hospital or an abortion clinic, they would be guaranteed the same protection and level of care.

Is that asking too much?

By contrast, consider that federal law provides criminal penalties of thousands of dollars in fines and even imprisonment if you would harass, harm, pursue, hunt, shoot, wound, kill, track, capture or collect any baby marine turtle, a baby bald eagle, or any baby of an endangered species.

It’s absolutely absurd that we’re having to decide whether we give human babies the love of protection under federal law that we give to animals.

This is truly an absurd moment on the floor of the United States Senate.

Have we become so numb as a nation that we cannot realize that we are talking about a baby here?

“A ‘Yes’ vote today is to uphold the bare minimum of any civilized society,” noted Daines. “A ‘No’ vote is to deny protection from barbaric violence to the most vulnerable among us: an innocent little baby.”

“You can either stand with Governor Northam for infanticide, or you can protect the most vulnerable among us,” he concluded.

Other Republican Senators also spoke out in order to raise support for the bill.

“It isn't about new restrictions on abortion, it isn't about changing the options available to women. It's just about recognizing that a newborn baby is a newborn baby, period,” said Senate Majority Leader Mitch McConnell of Kentucky.

“This bill would make clear that in the United States of America in the year 2019, the medical professionals on hand when a baby is born alive need to maintain their basic ethical and professional responsibilities to that newborn,” continued McConnell.  “It would make sure our laws reflect the fact that the human rights of newborn boys and girls are innate.”

“Can the extreme far-left politics surrounding abortion really have come this far?” asked McConnell. “Are we really supposed to think that it's normal that there are now two sides debating whether a newborn — whether newborn living babies deserve medical attention?”

The Born-Alive Abortion Survivors Act’s originator, Sen. Ben Sasse of Nebraska, also went to pains to point out that the bill was not a threat to abortion rights and was intended only to protect babies born alive during botched abortions.

“This bill doesn't have anything to do with Roe v. Wade,” said Sasse. “This bill is about something else. What this bill does is try to secure basic rights, equal rights for babies that are born and are outside the womb.”

“Today's vote is about whether or not you want to take the side of people like Virginia’s disgraced governor, Ralph Northam,” said Sasse.

“Northam made clear that a baby born alive during an abortion could be killed if that's what the parents decided to do after a debate,” explained Sasse, adding that “there could be a discussion about whether or not you throw that little baby into the trash can.”

“Governor Northam is disgraceful for a whole host of reasons, but unlike some other people, he actually told the truth about what he wants,” noted Sasse. “He wants a society where some people count more than others and other people are worth less than others.”

“What if an abortion is botched and instead of the child being killed in the womb they're actually delivered?” asked Sen. James Lankford of Oklahoma, who painted a vivid picture for his colleagues:

Now a child is on the table crying, pink skin, ten fingers and toes moving, what happens now? That's the question of this bill.

It is time for our country to demand that the victims of this abhorrent, inhumane treatment be afforded their rights and the perpetrators be held accountable. Speaking with one clear voice, we must say that every human being is made in the image of God and is therefore in possession of dignity and worth that cannot be displaced or dispossessed.

Anything short of this unambiguous declaration would be a tremendous disservice to our children and fatally undermine the values of our society that we claim to uphold. While the debate surrounding abortion has engulfed this country for decades, the goalposts are now being shifted. Reproductive autonomy, we are now told, must include the ability and choice to end the life of a baby who survives an attempted abortion.

In the end, only three Democrats crossed the aisle to take a stand against infanticide:  Sen. Joe Manchin of West Virginia, Sen. Bob Casey of Pennsylvania, and Sen. Doug Jones or Alabama.

A tally of how each senator voted for the Born-Alive Abortion Survivors Act can be found here.