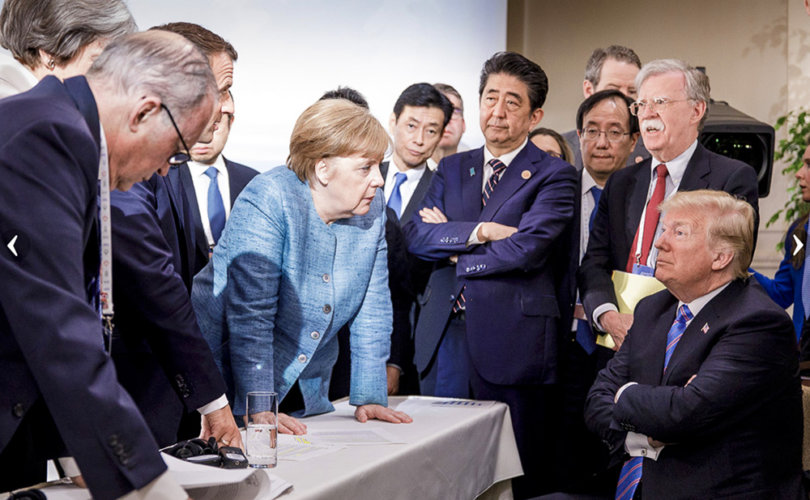 Meeting of G7 leaders at their 2018 summit in QuebecBundesregierung/Denzel https://www.bundeskanzlerin.de/Webs/BKin/DE/Mediathek/mediathek_node.html?id=2367554

WASHINGTON, D.C. June 14 (C-Fam) – In the lead-up to this year’s G7 summit in Quebec, Canadian officials were explicit: women and children were going to be central, and an essential component of their health and empowerment is abortion. But when the final declarations were released, all language about “reproductive rights” was removed, and, according to Devex, “the U.S. delegation…was responsible for the softer official language.”

Canadian Prime Minister Justin Trudeau, following the famous example of Sweden, has characterized his government and its foreign policy as “feminist.” He employs quotas to ensure that half his cabinet members are women and imposes regulations on his party to support only pro-abortion policies and candidates.  For the first time, as G7 host, Canada established a Gender Equality Advisory Council which submitted its recommendations to integrate gender into the G7’s work. Other inputs included a statement from more than sixty feminists that included a call for an end to the “criminalization or restrictive regulation of abortion.”

The Gender Equality Advisory Council also included abortion in its recommendations, which called for the withdrawal of the U.S. Protecting Life in Global Health Assistance policy (also called the Mexico City Policy), the provision of abortion as a component of humanitarian assistance, and funding for abortion advocacy, and government-subsidized coverage of abortion.

According to the chairman’s summaries of the discussions, several leaders called for the inclusion of “reproductive rights” language in the official declarations, but this proved impossible without U.S. agreement.

One member of the council is Katja Iversen, president of Women Deliver, which will host its next conference in Canada next year.  After the conference ended, Iversen and Canadian foreign minister Marie-Claude Bibeau co-authored an editorial framing the formation of the Gender Equality council as the major outcome of the G7, omitting any mention of the official outcome documents.

One of the council’s two co-chairs was philanthropist Melinda Gates, whose willingness to attach her name to a document with such an extreme pro-abortion message stands in sharp contrast to her prior insistence that her promotion of family planning would be separate from abortion.  Using the tagline “no controversy,” Gates drew criticism from feminist groups for “stigmatizing” abortion. Meanwhile, pro-life groups noted her willingness to partner with and fund family planning organizations that are outspoken abortion proponents. Recently, Gates has also been critical of the U.S. Mexico City Policy.

The last time Canada hosted the G7 (then the G8) was in 2010, where then-Prime Minister Stephen Harper launched the Muskoka Initiative, a global effort to improve maternal and child health around the world—without reference to abortion. This was criticized by then-U.S. Secretary of State Hillary Clinton, who served under President Barack Obama, and Cecile Richards of Planned Parenthood Federation of America.  Following elections in both the U.S. and Canada, their administrations’ positions on abortion have effectively reversed.

When Harper renewed funding for the Muskoka Initiative in 2014, the backlash over the exclusion of abortion flared up again.  At the time, Melinda Gates defended him: “Maternal and child health is on the global health agenda, in part, really, thanks to what Canada did.”

Regarding the abortion controversy, Gates repeated her intention to sidestep it: “I’ve decided not to engage on it publicly—and the Gates Foundation has decided not to fund abortion.”

If the G7 Gender Equality Advisory Council’s recommendations are any indication, her reticence to engage on abortion publicly is now a thing of the past.