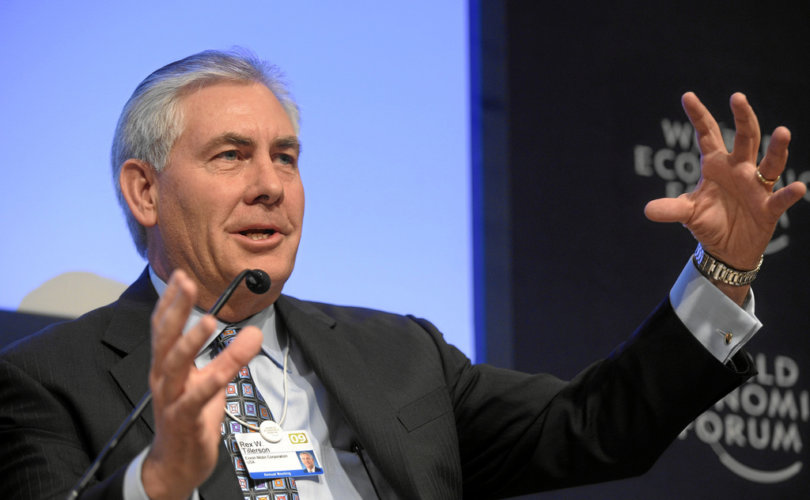 WASHINGTON, D.C., November 22, 2017 (LifeSiteNews) — The State Department commemorated “Transgender Day of Remembrance” this week, with Secretary Rex Tillerson saying the U.S. “remains committed” to advancing the rights of transgender-identifying individuals and inferring those rights are protected by the Constitution.

“The many transgender individuals who have lost their lives to acts of violence,” the statement began, before adding that LGBT persons and advocates are subject to increasing attacks and arrests in some parts of the world, often by government officials.

“Transgender persons should not be subjected to violence or discrimination, and the human rights they share with all persons should be respected,” Tillerson said in the statement. “On this 'Transgender Day of Remembrance,' the United States remains committed to advancing the human rights and fundamental freedoms of all persons. These principles are inherent in our own Constitution and drive the diplomacy of the United States.”

A spokesman confirmed that the State Department has issued a statement in the name of the secretary for “Transgender Day of Remembrance” since 2013, Breitbart reported.

Congress does not recognize the day, the report said, and a resolution introduced this year by Rep. Joseph Kennedy, D-Massachusetts, for it to be recognized has received little traction. Other Cabinet-level officials did not mark the transgender day.

San Francisco activist Gwendolyn Ann Smith, a biological male who identifies as transgender, began the event in 1999. Smith has a website tabulating violence worldwide reportedly based upon trans bias, according to the Breitbart report, with some qualified instances.

Most of the victims on Smith’s list were killed in foreign countries. Many of the countries, as Tillerson’s statement references, have relatively high rates of violence against transgender individuals, state-sanctioned or not.

Social conservatives and pro-family advocates have been encouraged by some Trump administration actions with regard to LGBT issues, specifically reversal of Barack Obama’s policy forcing public schools to allow gender-confused students to use restroom facilities of the opposite sex due to concerns over students’ safety and privacy. Trump’s Executive Order protecting religious freedom for gay marriage opponents was also welcomed, albeit considered not far enough on the religious freedom issue.

Concerns remain, however, about Tillerson’s stance on LGBT issues, based on his previous record at ExxonMobil of promoting homosexuality and abortion and his push for open homosexuality in the Boy Scouts of America.

Tillerson had also recognized Pride month earlier this year as Secretary of State.

Some activists denounced the Tillerson transgender statement because it gives legitimacy to the LGBT activist movement here and abroad, which actually fosters the difficulties suffered by gender-confused individuals.

“The people who come out in support of these things, with all due respect, they have not read the studies,” Heyer said.

Heyer advocates on behalf of persons who experience gender dysphoria and who regret having attempted to change their gender.

He told LifeSiteNews he consistently hears from people who regret their attempt to transition and that the LGBT movement actually hinders them from getting the psychological help they need because it would undermine the agenda.

Heyer said it has been proved many times that when transgender people don’t get the help they need, which he says is a result of the LGBT movement and a complicit media, they are left believing they have no alternative but to abuse themselves.

“The truth is that transgender people are the most self-destructive and self-abusive people in the country,” he said. “They do more harm to themselves than any government agency.”

Sixty to 70 percent of those identifying as transgender suffer from psychological, psychiatric, emotional, and social or other disorder, he said, and attempting to change genders is not a solution.

“We’ve known all this stuff since 1979,” said Heyer, “if this is productive, why haven’t we seen a reduction in the attempted suicides and self-abuse? Because it’s not productive.”

Heyer told LifeSiteNews the real human rights issue with transgender individuals is getting them the mental health treatment they need, and the government in any way affirming the LGBT agenda is not a step in this direction.

“If they really want to advance the human rights of transgender persons, we must make sure they get proper psychological therapy and psychiatric treatment,” stated Heyer, “because it’s not being done, and it’s often the reason transgender persons self-abuse and attempt suicide at a rate of 40 percent.”

“What’s wrong with these people?” he asked. “This is so bizarre. What do they hope to gain?”

LaBarbera, president of Americans for the Truth About Homosexuality, criticized any maintenance of the previous administration’s overseas activism in regard the LGBT agenda, something not necessarily appreciated by many foreign countries.

“Other countries don’t share our recognition and even celebration of immorality,” continued LaBarbera.

He concurred that support for so-called gay rights isn’t necessarily synonymous with human rights, and in fact often means taking away rights from those who aren’t on board with gay marriage. He pointed to the various U.S. small business owners who have been sued or otherwise persecuted for declining to take part in homosexual weddings.

“You can respect and defend and celebrate human rights without celebrating LGBT identities and activism,” LaBarbera said. “We know that homosexual activists are very aggressive overseas, and for the U.S. to some on board with this as just another human right is ridiculous.”

“We would have thought that these official acknowledgments would have ended with the Obama administration,” he continued, “and the fact that they are continuing under Trump is deeply troubling.”