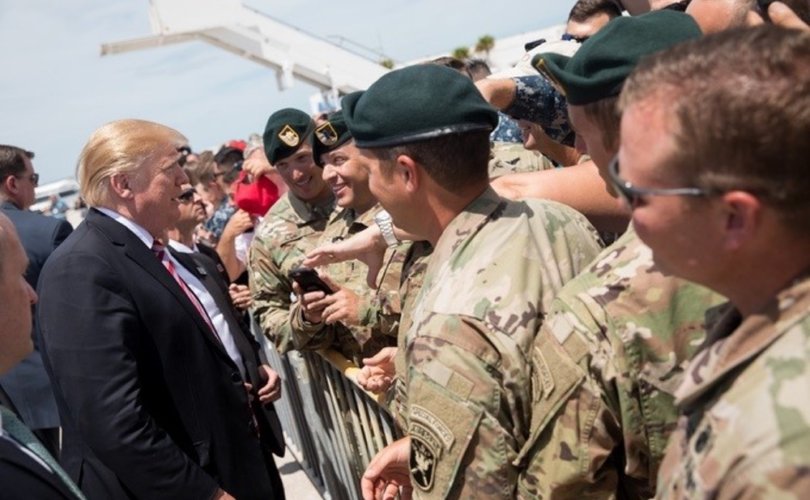 President Donald Trump is greeted by military personnel and their family members upon his arrival to Naval Air Station Key West in Florida on April 19, 2018.Shealah Craighead / White House

WASHINGTON January 22, 2019 (LifeSiteNews) — The U.S. Supreme Court ruled this morning that the Trump administration may temporarily enforce restrictions on transgender people serving in the military.

However, the high court declined to review whether the administration’s new policy is legal until a ruling emerges from the Ninth Circuit Court of Appeals. The court split 5-4 on the issue, with the liberal justices in the minority.

In November, Trump’s Solicitor General Noel Francisco submitted his request in advance of a ruling of the Ninth Circuit. Francisco called on the Supreme Court to take up the case immediately and issue a ruling during this term. He argued that a lower court had blocked an Administration policy that is “necessary to place the Department of Defense in the strongest position to protect the American people.”

Francisco said that a review by the Department of Defense determined that allowing persons diagnosed with a condition known as gender dysphoria to serve in the military or transition while serving poses a threat to military effectiveness and readiness.

The policy provides that so-called transgender individuals may continue to serve in the military, and it allows recruits who are not transitioning to the opposite sex to serve. Individuals experiencing gender dysphoria may serve, according to the policy, but only if they serve according to their natural sex. The Pentagon reassured personnel that persons experiencing gender dysphoria would not face dismissal nor would their medical care be interrupted until the policy is finally implemented.

However, in 2017 the Pentagon announced that it would pay for gender reassignment surgery for a service member. Troops who relied on the Obama-era rules regarding gender transition to begin the process will be allowed to serve. DoD said last year that over 900 men and women have opted for gender transitioning.

According to CNN, a DoD spokesperson said that the proposed policy is not “a ban on service by transgender persons,” who she said will be treated with respect and dignity. Lt. Col Carla Gleason told the outlet that the policy is necessary to ensure that the American military remains the “most lethal and combat effective fighting force in the world.”