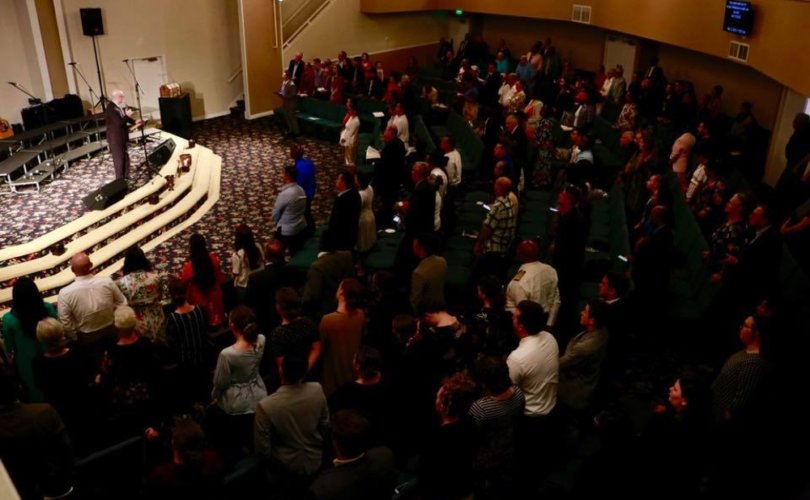 The church’s attorneys are arguing that Newsom’s shutdown of religious worship in the state is a blatant violation of the First Amendment’s constitutional guarantee that citizens may freely exercise their religious faith.

So far, the South Bay United Pentecostal Church and its Senior Pastor, Bishop Arthur Hodges III, have not prevailed in their lawsuit before both San Diego’s federal district court and the 9th Circuit U.S. Court of Appeals. In the 9th Circuit the church lost on emergency appeal, 2-1 before a three-judge panel. Judge Daniel Collins sided with the church, filing a powerful 15-page dissent that declared the church deserves the relief it seeks.

Tom Brejcha, President and Chief Counsel for the Thomas More Society, explained that the lawsuit and the church’s petition for emergency relief have proved necessary in order that the rights of these and all Americans may be secured. “These most essential liberties and fundamental freedoms are prescribed at the very outset of our Bill of Rights. California’s four stage Reopening Plan permits manufacturing, warehousing, retail, offices, seated dining at restaurants, and schools to reopen, but bans places of worship from holding church services. On its face,” he said, “this plan is a blatant violation of the Free Exercise Clause of our First Amendment.”

South Bay United Pentecostal Church and Bishop Hodges argue that Governor Newsom and other state and local officials have denigrated churches by downgrading them into a lower category of “non-essential” activities, along with movie theaters, salons and gyms – ignoring their preferred status in our Bill of Rights.  South Bay’s Freedom of Conscience Defense Fund attorneys, teamed with the Thomas More Society, originally filed a request for the church to be open for worship during the COVID-19 pandemic on May 11, 2020. Repulsed by a San Diego federal judge, they fast-tracked an emergency appeal up to the 9th Circuit Court of Appeals where they lost again.

Brejcha took note that increasingly outspoken and widespread protest on the part of people of faith, on top of President Trump’s recent remarks calling for churches to be allowed to reopen, and buttressed by a “letter brief” from the United States Department of Justice which argued that California has been violating constitutionally guaranteed rights, may have had an impact. Governor Newsom has reportedly said that he will soon make a statement about allowing religious services to resume.

“But we still need the United States Supreme Court to weigh in on this critical matter to ensure that state or local officials refrain now and forever from governing by decree to curtail constitutional rights,” declared Brejcha, who noted that relief is now sought for next Sunday, May 31, which is Pentecost, a significant day in the Christian church.

Judge Collins, in his dissent from the 9th Circuit panel’s denial of any emergency relief, which would have allowed the church to hold services, scored compelling points in his lengthy, persuasive opinion. He argued:

The Church offered a wide range of measures they are ready and willing to implement on reopening, including spacing out the seating, requiring congregants to wear face coverings, prohibiting the congregation from singing, and banning hugging, handshakes, and hand-holding. Judge Collins points out that the state’s only response was to insist that there is too much risk that congregants will not follow these rules. He notes that it is illogical to assume “that the very same people who cannot be trusted to follow the rules at their place of worship can be trusted to do so at their workplace and that the state cannot assume the worst when people go to worship but assume the best when people go to work or go about the rest of their daily lives in permitted social settings.” Collins urges California to “honor its constitutional duty to accommodate a critical element of the free exercise of religion—public worship.”