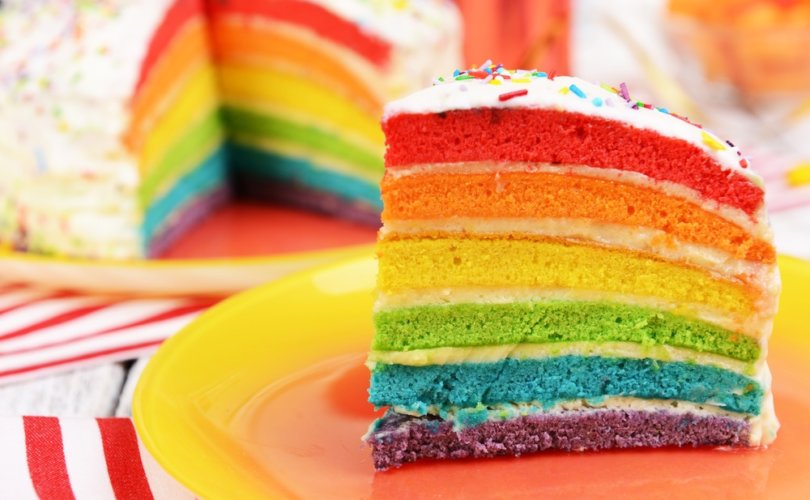 WASHINGTON, D.C., December 5, 2017 (LifeSiteNews) – The U.S. Supreme Court heard oral arguments today on whether a Christian baker should be forced to go against his religious beliefs and create a same-sex “wedding” cake when asked to.

The baker fighting for his right to not celebrate a same-sex “wedding” by creating a cake for it is Jack Phillips of Masterpiece Cakeshop in Lakewood, Colorado.

In 2012, a same-sex couple asked Phillips to create a cake for their “wedding.” Phillips is a Christian who won’t bake cakes celebrating Halloween, divorce, or bachelor parties. He referred the couple to another baker who was willing to participate in their union.

With the help of the American Civil Liberties Union (ACLU), the couple pursued legal action against Phillips.

Phillips and his staff were also ordered to undergo re-education and file quarterly “compliance” reports on their application of Colorado’s Anti-Discrimination Act for two years.

In 2013, a lower court ruled that Phillips violated the Colorado Anti-Discrimination Act. In 2015, the Colorado Court of Appeals upheld the decision.

Phillips was forced to stop creating all wedding cakes, and as a result has lost about 40 percent of his income.

On Monday, Phillips explained in a USA Today op-ed why he declined to create a cake that openly celebrated something against his beliefs:

I’m happy to sell a cake to anyone, whatever his or her sexual identity. People should be free to make their own moral choices. I don’t have to agree with them…

Designing a wedding cake is a very different thing from, say, baking a brownie. When people commission such a cake, they’re requesting something that’s designed to express something about the event and about the couple.

What I design is not just a tower of flour and sugar, but a message tailored to a specific couple and a specific event — a message telling all who see it that this event is a wedding and that it is an occasion for celebration.

In this case, I couldn’t. What a cake celebrating this event would communicate was a message that contradicts my deepest religious convictions, and as an artist, that’s just not something I’m able to do, so I politely declined.

But this wasn’t just a business decision. More than anything else, it was a reflection of my commitment to my faith. My religious convictions on this are grounded in the biblical teaching that God designed marriage as the union of one man and one woman.

The baker noted he and his family have received “hate mail,” “death threats,” and “obscene calls” since his case became public.

“A lot of other people don’t see tolerance as a two-way street,” he wrote. “But the Constitution does.”

A number of African-American leaders have come out in support of Phillips, saying that declining to bake a cake for a same-sex “wedding” is not tantamount to racial discrimination.

The Radiance Foundation, spearheaded by Ryan Bomberger, led a pro-freedom rally in front of the court today. Gay activists also rallied in opposition to Phillips and his rights.

“Artists shouldn’t be forced to express what the government dictates,” said ADF Senior Counsel Kristen Waggoner, who argued the case in front of the court.

“The commission ordered Jack to celebrate what his faith prohibits or to stop doing the work he loves,” she explained. “The Supreme Court has never compelled artistic expression, and doing so here would lead to less civility, diversity, and freedom for everyone, no matter their views on marriage.”

The Trump Administration's Department of Justice filed an amicus brief on behalf of Phillips in September.

“Forcing Phillips to create expression for and participate in a ceremony that violates his sincerely held religious beliefs invades his First Amendment rights,” Acting Solicitor General Jeffrey B. Wall wrote in that brief.  “Weddings are sacred rites in the religious realm and profoundly symbolic ceremonies in the secular one.”

Wall also pointed out that, ironically, in 2012, Colorado hadn’t even redefined marriage yet.

Indeed, when Phillips declined to create a custom wedding cake for Craig and Mullins [the gay couple seeking to commission a wedding cake] in July 2012, Colorado refused to recognize either same-sex marriages or same-sex civil unions … In other words, the State itself did not acknowledge the validity of the union it sought to compel petitioners to celebrate. It was not until October 2014, after federal courts had ruled that Colorado’s same-sex marriage laws were invalid, that the State began issuing marriage licenses to same-sex couples.

Many large corporations, led by the Human Rights Campaign, filed an amicus brief with the Supreme Court urging them to rule against Phillips. So did a number of left-leaning chefs and food industry professionals.

The Human Rights Campaign and others in the LGBT lobby are framing this as an issue of “discrimination.”

This case is one of the biggest of the year and in some ways the Roe v. Wade of religious freedom. It will determine whether the government may force people to create art that explicitly goes against their deeply-held beliefs.

As is common before major Supreme Court arguments, people camped out in front of the Court the weekend before to save spots in line for lawyers and others planning to enter the courtroom.

Justice Anthony Kennedy, a Catholic and the “swing” vote on the court who is well-known for his favorability to the homosexual cause, is also known for his tendency to side with free speech.

The Justice Editor of ThinkProgress.org, a clearinghouse for liberal news, tweeted that the “pro-equality” arguments presented to the Court were “terrible” and that Kennedy is “all but sure” to side with Phillips.

Leaving SCOTUS now. Terrible argument for pro-equality side. Kennedy all but sure to side with anti-gay baker.

Another Supreme Court reporter tweeted that Kennedy seemed to be siding with Phillips.

After nearly 90 minutes at #SCOTUS, majority including Anthony Kennedy seems to be leaning toward Masterpiece Cakeshop

“It seems to me the state has been neither tolerant or respectful” of Phillips’ views, Kennedy observed during the oral arguments.

Liberal Justice Elena Kagan questioned Phillips’ attorney, asking whether the same arguments in favor of the right of conscience of Phillips should apply to hair stylists and tailors.

Justice Sonia Sotomayer, another liberal, said to Phillips’ attorney: “The primary purpose of a food of any kind is to be eaten,” suggesting she may not consider a cake to be art.

Kennedy was also “suggesting skepticism” for the arguments made by Phillips’ attorney, the Associated Press reported.