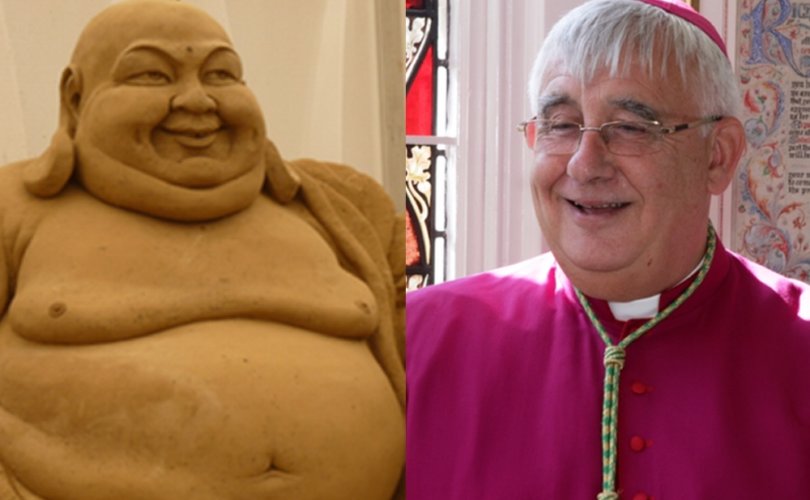 SHEFFIELD, U.K., June 6, 2017 (LifeSiteNews) — A Catholic diocese in the U.K. is encouraging Catholics visiting pagan shrines to “bow” to pagan images and to eat food “blessed” in pagan rituals in the spirit of “ecumenism” and “dialogue.”

In its guidelines for visiting pagan shrines (click on Ecumenism & Interfaith), the Catholic Diocese of Hallam run by Bishop Ralph Heskett, encourages Catholics to bring flowers to Buddha, bow to the Hindu murtis (image of the deities), and bow to the Sikh holy book. Catholics are also encouraged to eat the food offered to them that has been “blessed” in Hindu and Sikh rituals.

Bishop Heskett did not respond to a query by press time. LifeSiteNews asked him how he could justify the advice in light of the First Commandment, which states: “I am the Lord your God; You shall have no strange gods before Me.”

“The early Christian martyrs refused even a pinch of incense to the pagan demons, suffering terrible tortures and death,” he told LifeSiteNews.

“In the second book of Maccabees, Eleazar refused to even pretend to eat pork. And now, a Catholic bishop is encouraging the faithful to venerate pagan images, make donations to Buddhist temples, and consume ritually 'blessed' food. It is the responsibility of the clergy to help us maintain and strengthen our relationship with Christ, not to tell us how to engage in idolatry,” he added.

Hichborn said the guidelines reveal a crisis within the Catholic Church.

“Our Blessed Lord asked if the Son of Man would find faith when He returned. With this bishop advocating the veneration of pagan icons and promoting donations to Buddhist temples, this is a question we can start asking now. Can there be any clearer indication that the Church is suffering a crisis of faith, even to the point of apostasy?” he said.

A PDF archive of the Diocese of Hallam's “Ecumenism & Interfaith” guidelines (report continues below):

The Catechism of the Catholic Church teaches that the First Commandment against idolatry requires “man neither to believe in, nor to venerate, other divinities than the one true God.”

The 1949 version of the Baltimore Catechism states that a “Catholic sins against faith by taking part in non-Catholic worship, because he thus professes belief in a religion he knows is false.”

The Baltimore Catechism later adds that a person “sins by idolatry when he pays to a creature the supreme worship due to God alone as creator and preserver of all things.”

“Divine honor is paid to God alone. In the early days of Christianity, many Christians were put to death for refusing to burn incense before idols. The old Egyptians, and many pagans today, worship the sun, fire, or animals like the crocodile. God punished the Israelites for their idolatry,” it states.

Hichborn said it comes as no surprise that the Diocese of Hallam is now suffering financial collapse due to a more than 50 percent drop in the Mass-going population (30,000 to 12,000) since the diocese’s establishment.

“Bishop Heskett seems to be in a state of cognitive dissonance in that he doesn't see how honoring pagan deities may have something to do with a decrease of Catholic faith in his own flock and a resulting decline in Mass attendance,” he said.

“Our entire faith is centered around the Eucharist.  If Bishop Heskett is serious about his own salvation, and the souls of those entrusted to him, and if he truly desires to increase the number of faithful members of his diocese, then he must be completely devoted to Our Lord in the Eucharist.  There is no other answer,” he added.