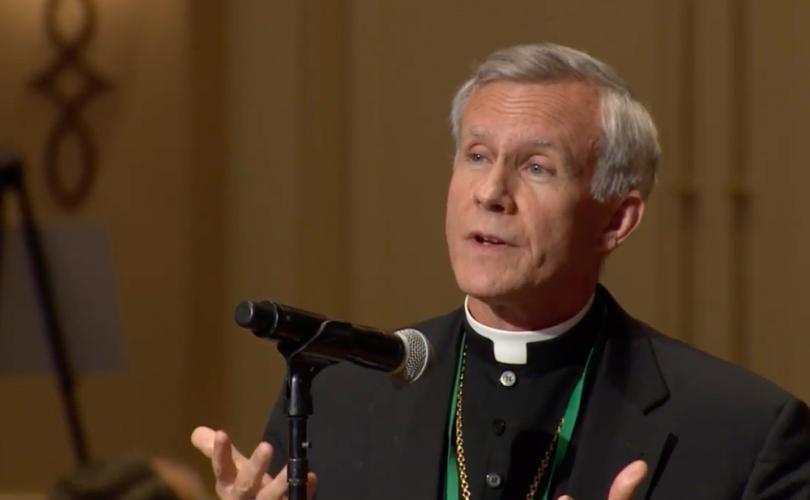 July 22, 2019 (LifeSiteNews) — Bishop Joseph Strickland of Tyler, Texas, spoke out on Twitter over the weekend about how the Catholic Church’s moral teaching on sexuality and the family has been broken and tainted of late, and he called for a return to the truth of that teaching by Catholic laity and bishops.

The deposit of faith has not been guarded, instead it has been fragmented & corrupted especially in the areas of marriage, family & sexuality. I pray that bishops & all Catholics will return anew to this font of revealed truth & pray for cleansing & renewal in God’s life & grace.

Bishop Strickland told LifeSiteNews his tweet was prompted by the upcoming anniversary of Humanae Vitae, and that he has been trying to tweet periodically on the themes contained in the document.

The 51st anniversary of the landmark encyclical on contraception and human life promulgated by St. Pope Paul VI is July 25.

The document upheld the Church’s teaching on immorality of contraception and is considered prophetic by many for its prediction of many social ills that have come to pass, such as marital infidelity, a general decline of morality, increased disrespect for women, and population control.

“Our society is unraveling, especially with regard to marriage, family and sexual morality,” Strickland said. “This is all the more tragic because God has revealed the truth that we need to flourish in this world and share eternal life with Him after we depart this world.”

The bishop acknowledged that he and all bishops share the same call to shepherd their respective flocks, and he said he feels as he could do more to promote what he called “our beautiful Catholic teachings on these topics.”

“I’m sure some of my brothers have done a much better job,” he said, “but I think we all need to ask ourselves how we can share the truth more clearly and more powerfully.”

The bishop had tweeted about Humanae Vitae last week, saying “It speaks of God’s glorious plan for marriage and it has been ignored for far too long.”

“If you haven’t read it, please do so with a heart open to the truth,” he said.

The day before his tweet on the fragmenting and corruption of the deposit of faith, Strickland tweeted about Pope Pius XI’s 1930 encyclical Casti Connubii, which affirmed the Catholic Church’s doctrine on marriage.

“If only humanity had listened almost 100 years ago,” he said. “May people of faith read this teaching with open hearts today.”

Strickland has given voice to the importance of the deposit of faith regularly in the past, whether on Twitter, in interviews, or from the floor of the USCCB General Assembly, including the promise bishops make to guard it upon their episcopal consecration.

The deposit of faith, or depositum fidei, is the truth of God’s Revelation as expressed in Sacred Scripture, which is the inspired and written Word of God, and Sacred Tradition, which is the Word of God as taught and transmitted through the teaching authority of the Church.

At a bishop’s consecration, he is asked, “Do you resolve to guard the deposit of faith, entire and incorrupt, as handed down by the Apostles and preserved in the Church everywhere and at all times?”

At last fall’s U.S. Bishops’ meeting, Strickland challenged his fellow bishops whether they as a conference were all on the same page with regard to the immorality of homosexual activity, considering the Theodore McCarrick scandal and the fact that some dioceses allow presentations of LGBT activism.

“It’s part of our deposit of faith that we believe homosexual activity is immoral,” Strickland said.

“The people, those that we label ‘homosexual,’ are children of God, and they need our great care,” he added. “But to me that real care comes from acknowledging the sin, and the reality that all of us are sinners called from sin to virtue.”

“How did this happen,” Strickland asked of the McCarrick scandal, “if we really believe that what was going on was wrong?”

“There seem to be questions about that,” said Bishop Strickland. “And I think we have to face that directly – Do we believe the doctrine of the Church, or not?”

Strickland made the same comment with regard to abortion in June during an interview with LifeSiteNews.