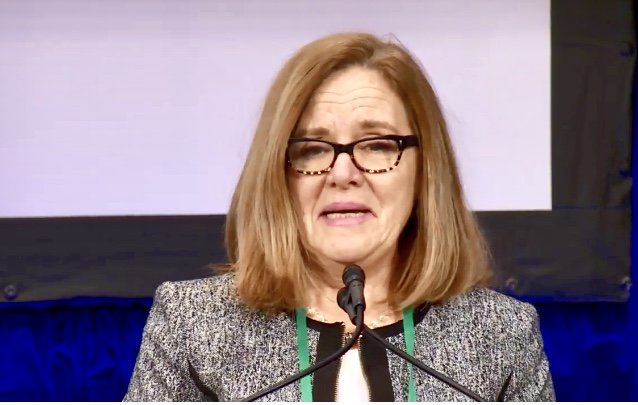 BALTIMORE, Maryland, November 14, 2019 (LifeSiteNews) — The U.S. bishops conference became overtly political and pitted the pro-life credentials of President Trump against those of Pope Francis when the topic turned to the sustained influx of those seeking asylum at the nation’s southern border.

None of the bishops rose to disagree with her characterizations.

“By its actions, this administration has essentially eliminated asylum at our border, especially for poor black and brown people,” said Gallagher, attempting to paint the Republican-led government as racist.

“More than 60,000 men, women and children are being forced by this administration to wait for months in Mexico before they can ask for asylum in the United States,” said Gallagher.

In her sole reference to the behavior of those charged with protecting our borders and processing migrants, Gallagher said that when she accompanied a group of asylum-seekers to a port of entry, “we were shouted out and ridiculed by a Customs and Border Protection officer,” leaving the impression that this is standard practice.

Not once was the dedication of the overworked personnel serving along the border recognized. It was a glaring omission.

When Gallagher completed her remarks, Bishop John Stowe of Lexington, Kentucky seized the moment to not only add his criticism of President Trump but to express his disapproval of the previous day’s vote by the bishops to continue to recognize abortion as the nation’s preeminent life issue.

Stowe thanked Gallagher “for making it so clear the crisis that has been in many ways created by this administration and its policies.”

“I’m really afraid after our discussion yesterday about Faithful Citizenship that many people who exploit the words of that document to be seen as supportive of the Trump administration and labeling it as a clearly pro-life administration,” continued Stowe. “I think it’s important to see this is a life issue and the status of our people coming across and seeking asylum is, as you pointed out very well, illegal both nationally and internationally.”

Because President Trump has become a hero of the pro-life movement, Stowe sought to diminish the importance of fighting abortion as a social justice priority.

Stowe’s comments reflect those made by Chicago’s Cardinal Blase J. Cupich during a tense public discussion the day before about the wording of a letter to be published based on the USCCB’s document on political life, “Forming Consciences for Faithful Citizens.”

Cupich said Pope Francis “speaks about the need to make sure we avoid those kind of ideological frameworks that our society today is so paralyzed in our political discourse by, but also he wants to make sure as we see here that not only do we avoid that, but we engage one another.”

“He also makes sure we do not make one issue that a political party or group puts forward to the point where we’re going to ignore all the rest of them. And then he also names some that we don’t name in our document,“ continued the Chicago cardinal.

Bishop Robert W. McElroy of San Diego also objected, saying, “It is not Catholic teaching that abortion is the preeminent issue that we face as the world in Catholic social teaching. It is not.”

Saying that abortion is preeminent is “discordant with the pope’s teaching if not inconsistent” continued McElroy, and a “grave disservice to our people if we’re trying to communicate to them what the Magisterium teaches.”

Stowe, Cupich, and McElroy are all recognized as liberal forces within the USCCB who have publicly endorsed the work of Fr. James Martin, SJ, who seeks to normalize homosexuality within the Catholic Church.

Earlier in the week, Bishop Stowe published an op-ed in a Kentucky newspaper calling for the U.S. Supreme Court to allow the Deferred Action for Childhood Arrivals (DACA) program to continue.

“While we wait to learn the fate of the DACA program, and more importantly the fate of approximately 700,000 young people and their families,” wrote Stowe, “it is a sobering reminder that it is well past time that we get serious about comprehensive immigration reform.”