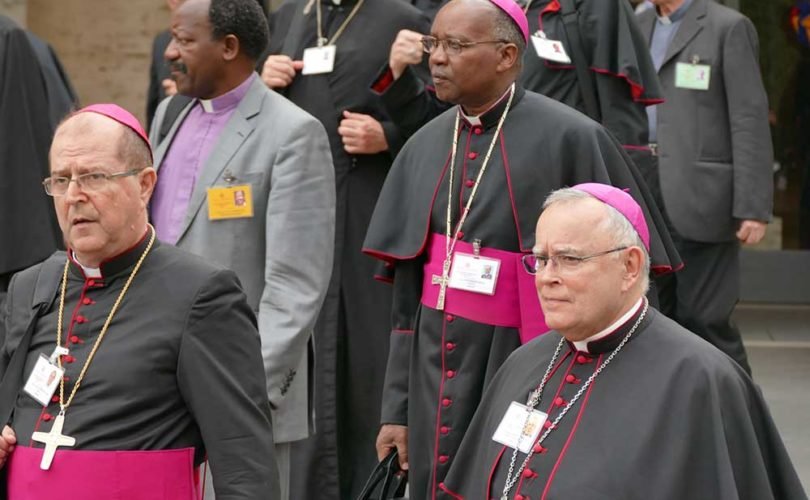 PHILADELPHIA, Pennsylvania, May 25, 2018 (LifeSiteNews) – Philadelphia Archbishop Charles Chaput defended the Holy Eucharist this week in a column for First Things, laying out specifics of how the German bishops’ proposal for intercommunion risks “serious offense before God.”

“The essence of the German intercommunion proposal is that there would be a sharing in holy communion even when there is not true Church unity,” Chaput said.

“This strikes at the very heart of the truth of the sacrament of the Eucharist, because by its very nature, the Eucharist is the body of Christ,” said Chaput. “And the “body of Christ” is both the real and substantial presence of Christ under the appearances of bread and wine, and also the Church herself, the communion of believers united to Christ, the head.”

“To receive the Eucharist is to proclaim in a solemn and public way, before God and in the Church, that one is in communion both with Jesus and with the visible community celebrating the Eucharist,” he added. “An intrinsic link therefore exists between “being in communion” with a community, and “receiving communion” in that community. These realities point to each other.”

While many things unite Catholics with Protestant Christians, Chaput wrote, it’s also a fact that important divisions still exist between Catholics and Protestants, and this is a reality that must be acknowledged.

“To insert a falsehood into the most solemn moment of one’s encounter with Jesus in the Eucharist—to say by one’s actions, “I am in communion with this community,” when one is demonstrably not in communion with that community—is a lie, and thus a serious offense before God.”

The German Bishops’ Conference proposes allowing Protestant spouses of Catholics to receive Communion in some circumstances, as long as they “affirm the Catholic faith in the Eucharist.”

Munich Cardinal Reinhard Marx, the conference’s chairman, is championing the effort along with others. Cologne Cardinal Rainer Woelki and six other German bishops disagree with the move.

The seven bishops in opposition asked the Vatican to intervene. Pope Francis, however, bounced the matter back to the German bishops, directing them to come to a “unanimous” decision at the conference level.

In his First Things column titled, “What happens in Germany” Chaput said the proposal will redefine the Church’s identity, and warned of the camel’s nose coming under the tent.

“If the Eucharist truly is the sign and instrument of ecclesial unity, then if we change the conditions of communion, don’t we in fact redefine who and what the Church is?” he asked. “Intentionally or not, the German proposal will inevitably do exactly that.”

“It is the first stage in opening communion to all Protestants, or all baptized persons,” said Archbishop Chaput, “since marriage ultimately provides no unique reason to allow communion for non-Catholics.”

The German intercommunion proposal also potentially assails the concepts of Holy Orders and apostolic succession, and Catholic theology on the sacraments, he said, and it could undermine the teaching of all Vatican councils.

“Communion presupposes common faith and creed, including supernatural faith in the real presence of Jesus Christ in the Eucharist, along with the seven sacraments recognized by the perennial tradition of the Catholic Church,” said Archbishop Chaput. “By renegotiating this fact, the German proposal in effect adopts a Protestant notion of ecclesial identity.”

He recognized how the German intercommunion proposal required only baptism and belief in Christ, neglecting the Catholic mystery of faith.

“Will the Protestant spouse need to believe in holy orders as understood by the Catholic Church, which is logically related to belief in the consecration of the bread and wine as the body and blood of Christ?” asked Chaput. “Or are the German bishops suggesting that the sacrament of holy orders might not depend upon apostolic succession? In such a case, we would be confronting a much deeper error.”

Further, he wrote, that the German proposal “severs the vital link between communion and sacramental confession.”

“Presumably it does not imply that Protestant spouses must go to confession for serious sins as a prelude to communion,” he said. “But this stands in contradiction to the perennial practice and express dogmatic teaching of the Catholic Church, the Council of Trent, and the modern Catechism of the Catholic Church, as well as the ordinary magisterium.”

The archbishop added that “It implies, in its effect, a Protestantization of the Catholic theology of the sacraments.”

He then posed a logical series of questions.

“If they need to believe in the real presence of Christ in the sacrament, why would they not need to share the Catholic belief in holy orders or the sacrament of penance?” he asked. “If they do believe in all these things, why are they not invited to become Catholic as a means to enter into visible full communion?”

“If intercommunion is not intended to imply an equivalence in the Catholic and Protestant confections of the Eucharist, then the practice of intercommunion misleads the faithful,” the archbishop wrote. “Isn’t this a textbook case of “causing scandal”?”

“And won’t it be seen by many as a polite form of deception or of hiding hard teachings, within the context of ecumenical discussion?” he asked. “Unity cannot be built on a process that systematically conceals the truth of our differences.”

Archbishop Chaput opened his column in the historical context of Martin Luther and his history in Germany.

Who can receive the Eucharist, when, and why, are not just German questions, he pointed out, and the answers to those questions have implications for the entire Church.

The passage said that the Eucharist cannot be the starting-point for communion because it presupposes that communion already exists. It said as well the relationship between the visible elements of ecclesial communion is “constitutive of the Church as the sacrament of salvation” and “only in this context can there be a legitimate celebration of the Eucharist and true participation in it.”

“What happens in Germany will not stay in Germany,” Archbishop Chaput definitively concluded. “History has already taught us that lesson once.”