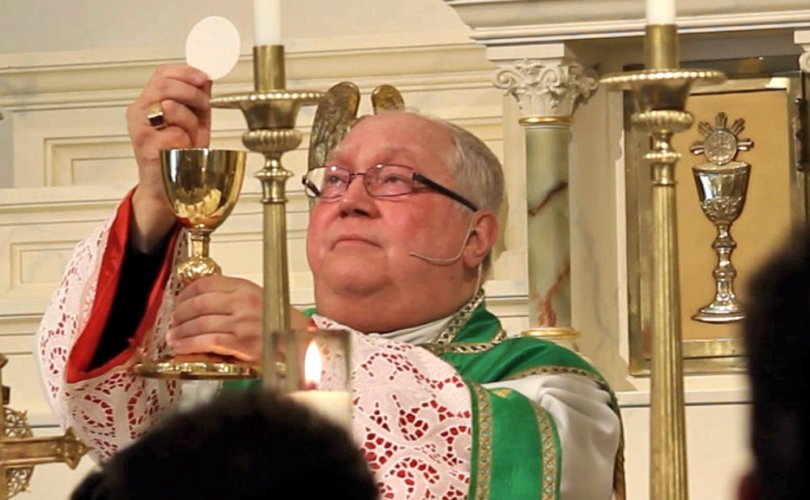 MADISON, Wisconsin, April 13, 2017 (LifeSiteNews) — Bishop Robert Morlino of the Diocese of Madison, Wisconsin has asked his entire diocese to begin receiving Holy Communion on the tongue, while kneeling, by next fall so as to increase “reverence” for the Real Presence of Christ in the Eucharist.

The bishop made his request at the conclusion of his homily at the April 11 Chrism Mass, where oils are consecrated for use in administering sacraments in parishes throughout the diocese.

Until the 1960s, Catholics around the world received Communion kneeling and on the tongue. The practice of Communion in the hand grew out of a disobedience that can be traced back to Holland. Because of the widespread abuse of receiving in the hand, Pope Paul VI granted an indult for the practice in a 1969 letter from the Sacred Congregation for Divine Worship.

Brent King, the Madison diocese's director of communications, told LifeSiteNews that receiving Communion the traditional way, kneeling and on the tongue, increases reverence due to an “outward posture” of lowering the body which can translate to an “inward disposition” of humbling oneself before God.

In his letter to the Philippians, St. Paul wrote that “at the name of Jesus, every knee should bow.”

King said if “we’re kneeling, we’re showing a reverence to what we actually believe, that the body, blood, soul, and divinity of Christ is present in the host.”

He also stated that no one would be refused Communion if they chose to continue receiving in the hand.

During his homily, Morlino alluded to a March 31 address by Cardinal Robert Sarah, where the Prefect of the Congregation for Divine Worship spoke of a “serious crisis of faith” happening in the Church due to an impoverished liturgy.

Cardinal Sarah said that the crisis which is “not only at the level of the Christian faithful but also and especially among many priests and bishops, has made us incapable of understanding the Eucharistic liturgy as a sacrifice, as identical to the act performed once and for all by Jesus Christ, making present the Sacrifice of the Cross in a non-bloody manner, throughout the Church, through different ages, places, peoples and nations.”

“There is often a sacrilegious tendency to reduce the Holy Mass to a simple convivial meal, the celebration of a profane feast, the community’s celebration of itself, or even worse, a terrible diversion from the anguish of a life that no longer has meaning or from the fear of meeting God face to face, because His glance unveils and obliges us to look truly and unflinchingly at the ugliness of our interior life. But the Holy Mass is not a diversion. It is the living sacrifice of Christ who died on the cross to free us from sin and death, for the purpose of revealing the love and the glory of God the Father,” the Cardinal added.

Bishop Morlino said that while the Catholic Church has excelled at social issues on every level, it has failed to pass on a living faith to the up and coming generations. He said this is revealed by the fact that less than 25% of Catholics now attend Mass.

Following Sarah’s lead, Morlino lamented how busyness has crept into the liturgy, where everyone feels the need to be busy “doing something” at the Mass. He said that the Second Vatican Council's call for “actuosa participatio” by the faithful in the liturgy has more to do with “actual participation” than “active participation.”

The bishop said it is more important for Mass participants to deeply contemplate what is being done at the Mass, namely that God is made present – Body, Blood, Soul and Divinity. This should stir the Massgoers soul and fill him with awe and wonder, but often the faithful are too busy to take notice, he added.

Fr. John Zuhlsdorf, a priest in the diocese of Madison, wrote on his Fr. Z’s Blog that what Bishop Morlino is doing is “exactly right.”

“It’s time to start growing more and more into serious, transformative sacred liturgical worship as individuals and as communities in the Church, small and large, families, parishes, dioceses, nations,” he said.

“Hence, what Bp. Morlino did is exactly right. He has provided a personal example. He has shown leadership. He has prudently allowed a congruent period of time for instruction as well as dialogue with the priests and faithful.  This is great blessing to Holy Church as he fulfills faithfully his heavy mandate.  May his example be taken up by many pastors of souls,” he added.

Last year when Cardinal Sarah asked clergy to adopt the ‘ad orientem’ — facing the East — position for Mass in time for advent, Morlino was one of the first bishops in the Church to respond to the call.

Prior to this that same year Morlino asked that tabernacles be returned to the front and center of every church in his diocese.

Bishop Morlino first came to the Diocese of Madison in 2003. At the time, it was often referred to as a bastion of liberalism, both politically and spiritually. There were only six men studying to be priests. Under Morlino’s leadership, the number increased sixfold by 2015.