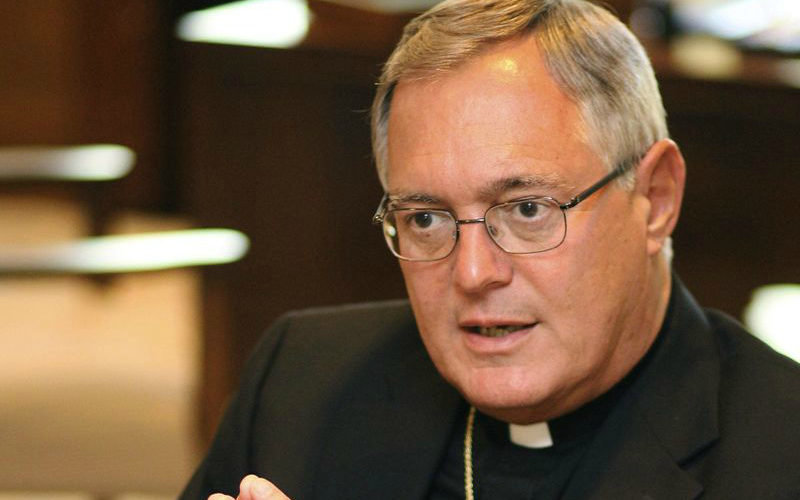 PROVIDENCE, Rhode Island, June 27, 2017 (LifeSiteNews) – Bishop Thomas Tobin reminded Catholics that Jesus commanded his followers to teach the truth, and that can get lost today in efforts to “listen” to agenda-driven groups like feminists and LGBT activists.

Tobin, not to be confused with liberal Cardinal Joseph Tobin of Newark, New Jersey, wrote about this phenomenon in his column of “random thoughts” on June 22.

“From many quarters today we keep hearing that the Church has to 'listen' more – to millennials, the LGBTQ community, the transgendered, feminists, and lots of other groups with particular agendas. I get it. It’s important that we talk and listen to one another, and I know as well as anyone that consultation is an indispensable part of the life of the Church today,” wrote Tobin. “However, when Jesus commissioned the Apostles to go forth, he instructed them to teach, not listen, didn’t he?”

“And while it’s instructive for the Church to listen to special interest groups, it’s also necessary that those groups listen to the Church, since the Church, guided by the Holy Spirit, preserves and promotes the truths of the Gospel and the teachings of Christ,” he continued. “Encounter and welcoming are virtuous practices, but not at the expense of the truth.”

Tobin blasted local media for suggesting the Catholic Church will collapse unless it married clergy and women “priests.”

He recalled that a letter to the editor warned the Church to “evolve or become extinct.”

“In other words, the Church has to change its teachings if it is to survive and prosper,” Tobin wrote. “'Prosper . . . you mean just like the mainline Protestant churches?' I said to myself.”

Tobin reflected on the upcoming two-year anniversary of the pope's encyclical on the environment, Laudato Si'.

“Pope Francis…calls us to a renewed commitment to the protection of the environment and the care of the earth, our common home. It’s a serious challenge we should all understand and embrace,” he wrote. “Having said that, the negative reaction to President Trump’s decision to withdraw from the Paris Climate Accord has been over-the-top, hysterical even.”

Whether the Paris agreement is the “best or only means” of controlling global warming and protecting the environment is a “legitimate debate,” he wrote. He suggested there is a “need” to do both of those things but there are differences of opinion in how to best do so.

“It also seems to me that some of the liberal politicians and Hollywood types who attacked President Trump over his climate decision could do a lot more themselves to protect the environment if they would just forego their frequent international travels, private jets, splendid yachts, palatial homes, and lavish lifestyles,” he quipped.

Tobin's comments on “listening” rather than preaching the truth are timely given the current push for the Church to take into consideration the positions of people who openly reject Church teaching on human sexuality. The most notable recent example of this is the release of a book by pro-gay Jesuit Father James Martin that calls for the building of a “bridge” between the Catholic Church and the “LGBT community.”

Martin's book “utterly [bypasses] the central claims at stake, namely, whether homosexual acts are morally permissible or not,” R.J. Snell explained in a review at The Public Discourse. “In asking for encounter, Martin does not ask the Church to do so in the Christian understanding of encounter, which always includes an anticipation of repentance and conversion.”

Tobin also reminded the faithful of the scope of the Catholic Church's work: “The Catholic Church brings people together in communities of faith for worship and praise, proclaims timeless moral truths, accompanies families in their daily lives, educates children, and serves the poor and needy. Beyond the government itself, the Catholic Church is the largest provider of charitable services in our state.”

“While we often focus on the challenges we’re facing these days, we shouldn’t lose sight, for even a single minute, of the great work, the beautiful work, the Church is doing every day,” he wrote.