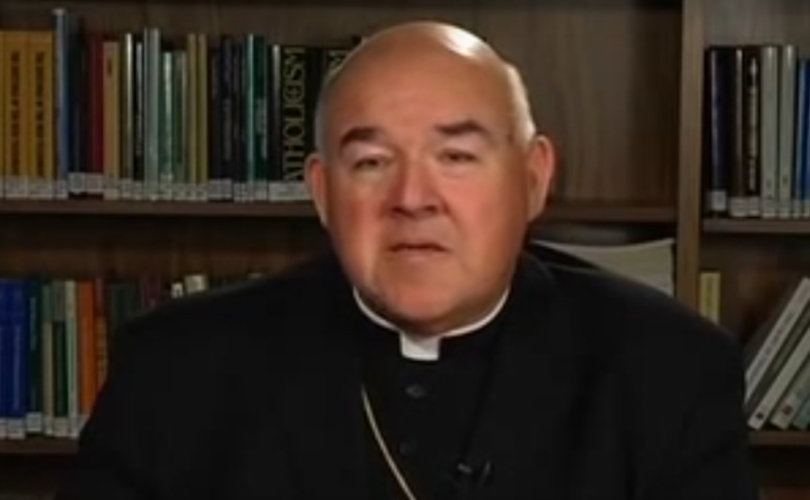 Bishop David Choby of the Diocese of Nashville.

Instead of listening to the parents’ concerns, the bishop has cited the Vatican’s newly minted and problematic sex-ed curriculum as a way to evaluate the school’s program.

In a letter dated September 2, Bishop David Choby of the Catholic Diocese of Nashville, Tennessee, told parents opposing the sex-ed program that while he “wholeheartedly support[s]” their right as “primary educator,” nevertheless, when they send their children to school, they no longer exercise that right when it comes to school “requirements.”

“Thus, in choosing Father Ryan High School as the place to engage your son in formal education, you have agreed to observe its legitimate requirements relating to the ultimate goal of your son receiving a diploma from the school,” the letter, obtained by LifeSiteNews, states.

But the Catholic Church teaches that the rights of parents over their children is “irreplaceable and inalienable and therefore incapable of being entirely delegated to others or usurped by others.” With respect to sex education, the Church specifically calls it the “basic right and duty of parents” that “must always be carried out under their attentive guidance, whether at home or in educational centers chosen and controlled by them.”

“In this regard, the Church reaffirms the law of subsidiarity, which the school is bound to observe when it cooperates in sex education, by entering into the same spirit that animates the parents,” states Saint Pope John Paul II in his 1981 apostolic exhortation Familiaris Consortio. The teaching was reaffirmed in 1995 in the Pontifical Council for the Family’s document “The Truth and Meaning of Human Sexuality.”

Pope Francis affirmed this teaching in Amoris Laetitia, stating that “the overall education of children is a ‘most serious duty’ and at the same time a ‘primary right’ of parents … an essential and inalienable right that parents are called to defend and of which no one may claim to deprive them.”

Bishop Choby stated in the letter his belief that the program “does seek to be faithful to the Church’s teachings” and that the school with its sex-ed program “sincerely seeks to reflect on the goodness and purpose of human sexuality as found in the teachings in this area by St. John Paul II.”

Parents say the course could be spiritually harmful to their children, calling it a “near occasion of sin.” James Bowman, whose stepdaughter attends the school, has joined a coalition of parents opposing the program, telling LifeSiteNews that some of the material present in the sex-ed gives too much detail for so young an audience.

“Why do our children have to learn about the size of a penis when erect or flaccid? Why do they have to learn about sexual stimuli and erogenous zones, specifically naming the clitoris and other female parts? How is this important to theology?” he said.

Bowman, who has a Bachelor of Fine Arts in graphic design, said it is not prudery but prudence that drives his concern. He worries that the sex-ed could harm students by introducing them to adult sexual themes when they are too immature to process it properly.

“Each child has a different level of maturity and each child matures at a different time. I know that our daughter is not ready to receive this material. She is not ready emotionally and physically. It’s a fine line between helping a child to understand, and hurting them by giving them bags that are too heavy for them to carry,” he said.

Bowman questioned the school for superseding the rights of parents when it comes to sexual education. “The parents should be the ultimate guide on sex-ed, not school administration,” he said, adding that Catholic teaching is clear on the matter.

“Bishop Choby has directly pitted himself and the school against the teachings of Holy Mother Church. The Church has consistently maintained the primary right and indeed obligation of parents to guard the chastity and innocence of their children, and also to educate them in matters pertaining to human sexuality. Because of this, Bishop Choby's consistent appeal to his own personal experience and the experiences of other children is completely irrelevant. When a standard has been established and upheld by the Church, it goes without saying that competent authority ought to follow it,” he said.

Canon law expert Fr. Gerald Murray told LifeSiteNews in an earlier report on the matter that “any sex education program that is not in accord with the convictions of a child's parents cannot be made mandatory without violating ‘the right and duty’ of the parents to control what their children are taught in this delicate and sensitive matter.”

Canon lawyer Philip Gray, president of the St. Joseph Foundation, also told LifeSiteNews in a previous report on the matter that competent authorities are “not in line with Church teaching” when they refuse to allow parents to opt their kids out of school programs that parents find objectionable.

Rather than listening to the serious objections to the sex-ed course raised by the parents, Bishop Choby in his letter instead pointed to the Vatican’s recently released sex-ed program, telling parents that it shall be used as an “instrument to evaluate” the school’s own course.

Hichborn noticed the implications of the bishop’s reference to the Vatican sex-ed in relation to parental rights.

“It seems that the publication of the Vatican's new sex education is emboldening a radical departure from traditional means of educating children where parents played the part of primary educator. It appears that the Vatican sex ed is now being used to trump those rights,” he said.

The Vatican sex ed, released in July during World Youth day in Poland, has been criticized by international life and family organizations and leaders for being contrary to previous Church teaching, for subverting parents, and for corrupting children. Here are some of the criticisms:

Bishop Choby concluded his letter by chastising the parents for raising their concerns and gaining “notoriety,” stating that it puts their children attending the school in an “awkward position.”

“Students, I am sure, will or have already seen news stories on television and the Internet about all of this. They will undoubtedly make the connection and conclude who among them is at the heart of this controversy. That will be unfortunate,” he wrote.

Hichborn called the bishop’s closing words to the parents “disturbing.”

“He suggests that the parents will be to blame for causing difficulties for their children by fighting against the school's mandatory sex-ed program when, in fact, it is quite the opposite: It is the school backed by the bishop which is forcing parents to either violate their consciences or to leave the school. The parents are not being the bullies here.”

“The simplest answer, and the moral and Catholic answer, would be for the school to follow established Church teaching that prioritizes parents in discussing matters of sexuality with their children. If the school insists on having a sex-ed course, it should at least allow the parents to opt their children out of that portion of the class,” he said.

Petitions (here and here) asking the bishop and school administration to reverse their position and support parental rights have received more than 9,700 signatures as of this writing.