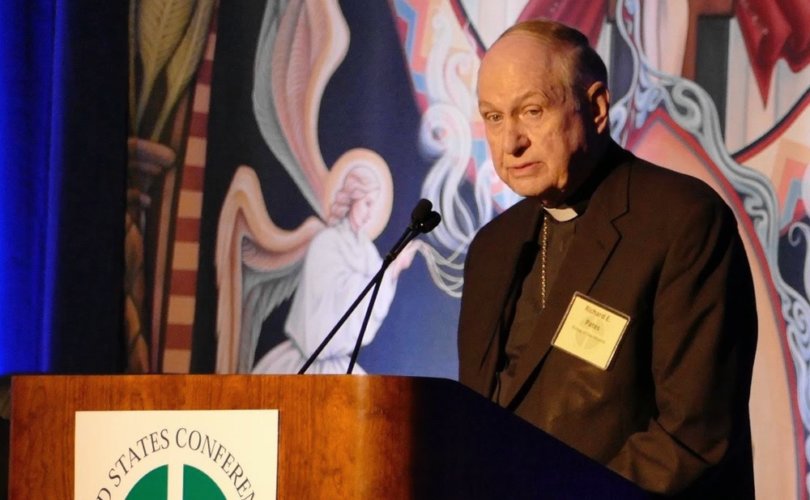 The CCC board had asked him at its most recent meeting “in the spirit of the third anniversary of Laudato si” to convey two things regarding the U.S. Catholic Climate Declaration, he said, which “expresses concurrence with the climate goals in the Paris Agreement.”

Pates is the Bishops’ liaison to the Catholic Climate Covenant (CCC), a D.C.-area nonprofit created in 2006 by the Bishops’ conference.

“It is requested that the USCCB as a body sign on to the declaration,” he told the bishops.

The declaration, which is not an official Church document, was created by the CCC, and it calls for the U.S. to rejoin the Obama-era global climate agreement.

Pro-life and family leaders have criticized the agreement for its use of language such as “gender equality” and “empowerment of women,” which critics say are used to push LGBT acceptance, contraception, and abortion.

The Paris Agreement also supports the U.N.’s Sustainable Development Goals, Goal #5 of which is to “achieve gender equality and empower all women and girls,” and to ensure universal access to sexual and reproductive rights.

The U.S. Catholic Climate Declaration draws from Francis’ ecological encyclical Laudato Si and other USCCB statements, and urges protection for the “human” and “natural” environment in order to avoid the “most dangerous effects” of climate change.

The CCC declaration employs a good deal of secular rhetoric, blaming “unchecked human activity” and greenhouse gas emissions for why “human-forced climate change” is occurring to our “common home.”

President Trump announced his intent to withdraw support for it last June, however, with the reasoning it would undermine the American economy. The administration confirmed to the UN last August the U.S. would be pulling out of the agreement.

Following Trump’s June announcement that the U.S. would be abandoning the agreement the USCCB had issued a statement saying, “The President's decision not to honor the U.S. commitment to the Paris agreement is deeply troubling.”

Aside from lobbying for the U.S. to re-enter the global climate agreement, the U.S. Catholic Climate Declaration reads in part: “we are still in on actions that meet the climate goals outlined in the Paris Agreement.”

The phrase “we are still in” is not presented as a proper name in the CCC petition, but it is otherwise the same tag line and title for a nationwide coalition consisting of some 2,600 elected officials, business and university leaders, religious groups, and others who still support the Paris Agreement.

The “We Are Still In” network is associated with factions of the left, including George Soros-funded Center for American Progress, and pro-abortion figures California Governor Jerry Brown and former New York Mayor Michael Bloomberg.

“We Are Still In” had issued an open letter just after President Trump’s decision to pull the U.S. from the Paris Climate Accord that calls for among other things, limiting greenhouse gas emissions and keeping temperature growth to less than 2℃.

The language in the CCC’s declaration and the We Are Still In open letter are uncannily similar, if not almost the same word for word.

The Catholic Climate Covenant has “taken center stage as main player in re-scripting climate change as a non-negotiable,” Catholic commentator and editor of The Christian Review Deal Hudson wrote in December 2016. Hudson had said the group’s list of national partners comprised a “Who’s Who of the Catholic Left.”

In his bid this week for the US Catholic Bishops to officially lend their Conference’s name the U.S. Catholic Climate Declaration Bishop Pates said that Bishop Frank Dewane of Venice, FL, would direct the CCC’s request through the appropriate USCCB committee, for “an anticipated conference-wide action at the November meeting.”

The second request the CCC board had of the USCCB recalled a letter that Pates, Archbishop Timothy Broglio, and Bishop Dewane had put on the bishops' internal website inviting individual bishops to sign on to the declaration in the name of their jurisdiction.

“A goodly number have done so,” Pates told the bishops. “We offer this opportunity again with strong encouragement.”

Pates, along with Cardinal Joseph Tobin, archbishop of Newark, had announced last month that they were adding their names to the U.S. Catholic Climate Declaration.

The Bishops officially endorsing of the U.S. Catholic Climate Declaration would provide significant influence in the climate change issue, according to Pates.

“Our episcopal leadership can exercise a significant positive impact across the board,” he said.

While his remarks were not part of the meeting agenda, related materials had been distributed to the Bishops.

These included a copy of the declaration and a commitment form, the talk Pope Francis gave to global energy leaders last Saturday, and also quotes from Pope Saint John Paul II, Pope Benedict XVI and Francis.

In Saturday’s talk Pope Francis said that protecting the environment and helping the poor were two great needs of the world, Pates stressed.

“He also strongly reiterated the need for urgent action,” he added. “And I quote: “Progress has indeed been made, but is it enough? Will we turn the corner in time? No one can answer that with certainty, but with the passing of each month, the challenge of energy transition becomes more pressing.”

Pates closed his remarks by thanking the Bishops for joining him “in the exercise of our moral leadership.”