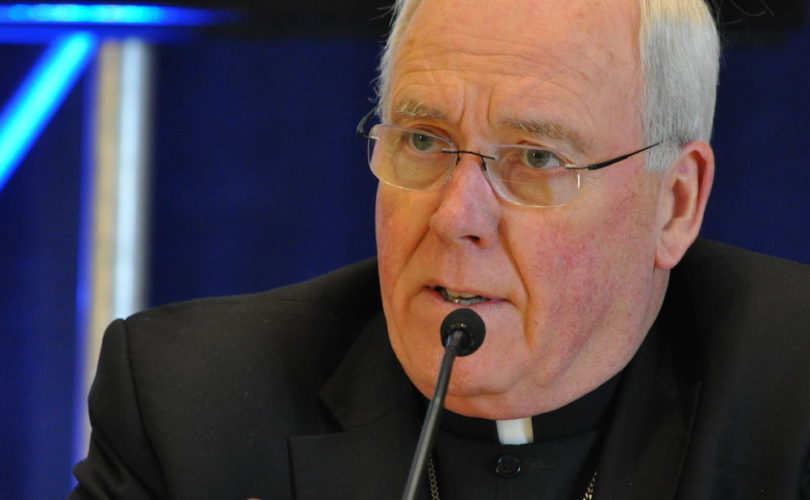 The May 13 letter of “guidance” from the Administration fails to address the gender identity issues at hand, Buffalo Bishop Richard Malone and Omaha Archbishop George Lucas said in a May 16 statement, and disregards legitimate privacy and safety concerns.

“The guidance fails to address a number of important concerns and contradicts a basic understanding of human formation so well expressed by Pope Francis: that ‘the young need to be helped to accept their own body as it was created,’” they went on to state, referencing the Holy Father’s recent apostolic exhortation Amoris Laetitia. “As Pope Francis has recently indicated, 'biological sex and the socio-cultural role of sex (gender) can be distinguished but not separated.'”

The bishops also affirmed the Catholic Church’s teaching on the inherent dignity of every human being as well as its advocacy for the wellbeing of all people, in particular the vulnerable. “Especially at a young age and in schools, it is important that our children understand the depth of God’s love for them and their intrinsic worth and beauty. Children should always be and feel safe and secure and know they are loved,” they said.

But the government’s “guidance” letter threatening refusal of federal funds falls short in achieving this for students, they said.

Obama’s Departments of Justice and Education issued the joint letter Friday stating that students identifying as “transgender” must be allowed use of private facilities aligned with their gender identity with “no medical diagnosis or treatment requirement.”

The Administration had declared in 2014 that “transgender” individuals were entitled to protections under Title IX, the federal statute intended to stop discrimination against women.

According to last Friday’s eight-page letter, as soon as a child, or his parent or guardian claims that the child identifies as a member of the opposite sex, the school must recognize this and act accordingly “as a condition of receiving federal funds,” meaning the school cannot require a “transgender” student to use separate facilities.

The “guidance” also dictates that members of one biological sex must be allowed to stay overnight in the same rooms or dormitories as members of the opposite sex, and says educators are to “ensure that a transgender student is called by the appropriate name and pronouns.”

Bishop Malone, chair of the USCCB Committee on Laity, Marriage, Family Life and Youth, and Archbishop George Lucas, USCCB Committee on Catholic Education chair, said in their statement that children and loved ones in the “difficult situations” of gender dysphoria deserve compassion and respect, but, “All of these can be expressed without infringing on legitimate concerns about privacy and security on the part of the other young students and parents.”

The two prelates criticized the Obama Administration directive for not respecting those concerns and shutting down the voice of U.S. citizens in the matter.

“The federal regulatory guidance issued on May 13 does not even attempt to achieve this balance,” they wrote. “It unfortunately does not respect the ongoing political discussion at the state and local levels and in Congress, or the broader cultural discussion, about how best to address these sensitive issues. Rather, the guidance short-circuits those discussions entirely.”

The bishops said they were praying for federal government to come up with “more just and compassionate approaches and policies,” and indicated they will continue to review the government’s instruction.

Family advocates had immediately denounced the directive as unconstitutional, overreaching and political. At least 12 states have said they will refuse to implement the new policy, despite the Obama Administration’s threat of withholding federal funds, some calling it a “social experiment,” and “intimidation.”