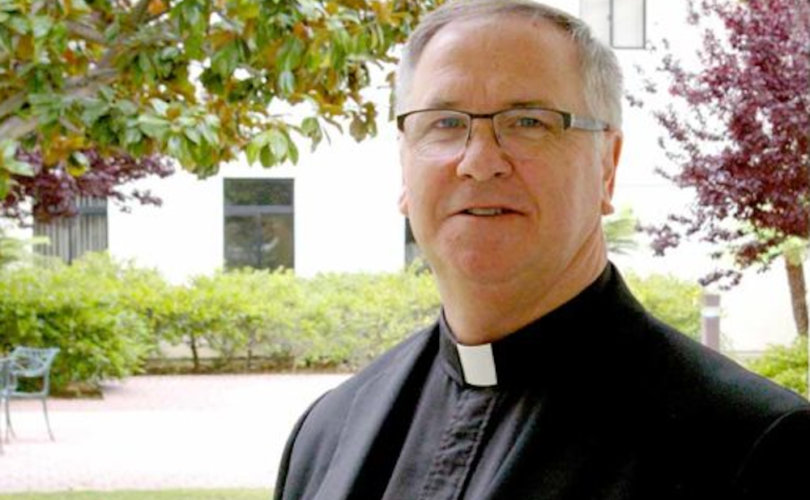 SAN DIEGO, California, October 13, 2017 (LifeSiteNews) — Two left-leaning Catholic bishops, along with “married” homosexual partners, celebrated a special Mass for “Families of the LGBT Community” in San Diego last weekend. The event commemorated the 20-year anniversary of a controversial U.S. bishops’ letter on homosexuality that was censured by the Vatican within a year of its release.

Bishop John Dolan, an auxiliary bishop in the Diocese of San Diego, presided over the October 7 mass commemorating the U.S. Conference of Catholic Bishops' (USCCB) letter on homosexuality “Always Our Children.”

The mass, concelebrated with San Diego Archbishop Robert McElroy and 16 other clergy, took place at St. John The Evangelist Catholic Church, located in the heart of Hillcrest, the historic epicenter of homosexuality in San Diego.

Before the Mass, Dolan said: “This parish falls within the Hillcrest district and there are a number of people in our community here who want to participate in the life of the Church, and we want to make sure they have a welcome home in some fashion here within the Church.”

During his homily, Dolan praised the 1997 letter “Always Our Children” as offering “an outstretched hand” to parents and family members of homosexual Catholics.

“To you parents, there is no denying your own sons and daughters, whatever their walk in life,” he said.

“Married” homosexual partners Kyle and Snapper Escobar-Humphries said they attended the ‘LGBT’ Mass with their 8- and 9-year-old children to teach them about equality.

“It’s important because my kids have two gay dads and I would like for them to understand that this church is open for everybody,” said one of the “dads” to the San Diego Tribune. “I want them to understand how to treat each other equally.”

The USCCB’s letter Always our Children was addressed to Catholic parents with homosexual children. The letter was criticized by faithful Catholics for its language that originally called the homosexual orientation a “fundamental dimension of one's personality.”

Less than a year after its release, the Vatican’s Congregation for the Doctrine of the Faith (CDF) demanded several changes to the text. One change included calling the homosexual orientation “a deep-seated dimension of one's personality” so as to avoid the inference that if homosexuality is a “fundamental dimension of one's personality,” it must be God-given and permanent.

The Vatican also requested that a paragraph telling parents to “wait and see” about the possible homosexual orientation and activities of their adolescent children be revised to advising parents to be “always be vigilant about their children's behavior and exercise responsible interventions when necessary.”

Bishop Fabian Bruskewitz, then bishop of Lincoln, Nebraska, said after the letter’s release that it was “very flawed and defective.” He asserted that it was “founded on bad advice, mistaken theology, erroneous science and skewed sociology.”

He added that the “document carries no weight or authority for Catholics, whom I would advise to ignore or oppose it.”

Ex-homosexual Catholic Joseph Sciambra has said the U.S. bishops should apologize to Catholics who struggle with same-sex attraction for releasing the letter, what he called a “travesty.”

“The text is still shocking for its gross generalizations and unwillingness to even briefly grasp the intrinsic desperation and depravity found in the modern ‘gay’ lifestyle,” he wrote in a 2016 article.

“The document also openly condemns those with same-sex attraction to a lifelong imprisonment within homosexuality,” he added.

Dolan said during his homily that the letter was written “at a time when good and faithful church-going Catholics were witnessing society quickly change before their eyes and the Church seemed – in their eyes – to stand still.”

The letter was intended to help parents of same-sex attracted children to meet with pastors.

“In many of these encounters with pastors, parents were met with love and compassion as they discussed their children’s 'new way of life,' while – sadly – others were met with words of condemnation,” he said.

“It is true that ‘Always Our Children’ was not warmly received by many Catholics in the U.S. It was too left-leaning for some; even though the bishops then made it clear that the letter was not breaking any new ground on sexual morality, chastity, and mature sexual development according to Sacred Scripture and Tradition,” he said.

“The document was also too right-leaning for others; especially as the language used in the document regarding homosexuality seemed stilted and even offensive to many in the gay community,” he continued.

“However, recall that the letter was ‘an outstretched hand of the bishops' Committee on Marriage and Family to parents and other family members.’ And, for this reason alone, it was a start. It became an opening for more fruitful dialogue and civil discourse,” he added.

Dolan said that 20 years after the letter’s release, the “dialogue and discourse continues.”

Allyson Smith, who attended the event as a member of Ecclesia Militans San Diego, a group of concerned Catholics, called Bishop Dolan's homily a “total capitulation to the homosexual activist agenda.”

“(There were) no calls for homosexuals to repent and convert included in his homily,” she told Church Militant.

Laurence Greenbank, a Catholic who attended the event to pray a rosary for participants, called the LGBT Mass a “staged media event.”

“The 'LGBT' Mass was a media event, staged by the diocese. I believe the real story is how the bishop turned the celebration of the Holy Eucharist into a media event, not a place of worship. The whole event seemed to be choreographed, with the TV cameras, the VIPs, including the mayor and city council member, the imported rich gays (at least two of them were from Palm Springs), the Hillcrest elite gay men’s group with the matching T-shirts. There was an enormous amount of money and preparation spent on this event,” he told LifeSiteNews.

“It is absolutely disgusting to see the Holy Eucharist used for political agenda,” he added.

Several tables with rainbow-colored tablecloths were set up for the post-Mass reception in the playground of the Aseltine School, which adjoins St. John the Evangelist church.

Greenbank said he was alarmed at the large police presence at the event, including a sniper.

“I was alarmed to find five police vans in the church parking lot. Half the police were in camouflage, at least two had full packs.  They seemed equipped for warfare, not for security,” he said.

“I saw one military guy deployed on the roof of the church building. He carried a military rifle with a scope. He wore a camouflaged hat. He remained hidden for the event,” he added.

The faithful Catholics who attended the event said they were dismayed that Bishop Dolan did not comment during his homily on the Catholic Church’s condemnation of homosexual acts as “intrinsically disordered” and the homosexual inclination as “objectively disordered.”

“Bishop Dolan assured the homosexuals and lesbians in the congregation that 'we will accompany you and ponder the mysteries of Christ within you,' however, he did not explain what he meant by this,” said Moira Malley, who attended the event, to LifeSiteNews.

Bishop Dolan did, however, point his moral finger at those who make “ad hominem attacks and lies about those with whom we disagree.”

“As our Catechism states, ‘If a lie in itself only constitutes a venial sin, it becomes mortal when it does grave injury to the virtues of justice and charity.’ Civil discourse and fruitful dialogue cannot be forfeited by those who uphold the teachings of the Church and/or by those who struggle to incorporate our teachings within their personal lives,” he said.

After communion, male gay-activist and transvestite Nicole Murray-Ramirez went to the lectern and said that after living in San Diego for decades his “prayers were answered by these two bishops (Dolan and McElroy),” who had “spoken out for equality and civil rights.”

Bishops Dolan and McElroy then received Humanitarian Awards from the Community of Hillcrest, which they gratefully accepted to applause, followed by a standing ovation.