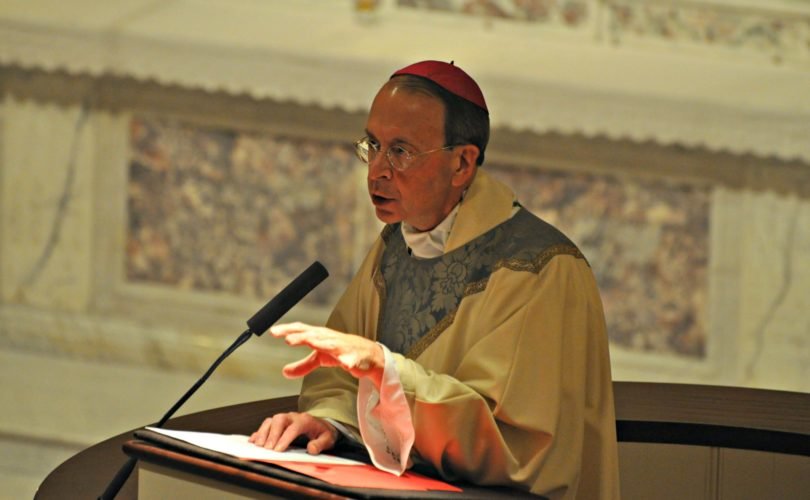 Growing threats to religious liberty, including the Obama administration’s HHS mandate and the legalization of same-sex marriage, continue to be of “great concern” to the U.S. bishops, said Archbishop William Lori, the chairman of the bishops’ Committee on Religious Liberty, this week.

The archbishop updated his fellow bishops on the work of the committee at the United States Conference of Catholic Bishops' (USCCB) fall General Assembly meeting in Baltimore, Monday.

The bishops’ conference decided unanimously in June to renew the ad hoc committee for another three-year term, with bishops giving input since that time on the committee make-up and focus that will be implemented going forward.

Now, said archbishop Lori, the committee is getting something of a makeover, which will see it increase its focus on teaching, media use, and networking and partnerships.

“We’ve shifted our emphasis somewhat from the inaugural term,” Archbishop Lori said, explaining that the committee will now have more communications experts and fewer lawyers.

The committee will now also serve as a resource clearinghouse for various USCCB committees and the conference’s leadership, he said, providing advice rather than deciding on any particular issue.

Among several initiatives the committee is spearheading in the coming year is the celebration of the 50th anniversary in 2015 of the Vatican II document on religious liberty, Dignitatis Humanae, and the 2015 Fortnight for Freedom, with the new theme, The Freedom to Bear Witness.

“And that is to say, not only freedom of worship,” he said. “But all of the ways in which we bear witness to the Gospel by word and by work, the freedom to proclaim Christ publicly.”

In addition to the institutional Church, this freedom belongs also to people in the pews, he said,

Religious liberty curriculum is in the development process for diocesan schools across the country, while the Call to Prayer initiative for life and religious liberty is also still in effect.

“The ad hoc committee continues to collaborate with the First Amendment partnership which is a multi-faith initiative that seeks to promote and protect religious freedom for people of all faiths, the archbishop told the conference.

Current challenges to religious liberty on which the committee is focused include the HHS Mandate, religious liberty issues created by marriage redefinition, mandatory insurance coverage of all abortions, and keeping watch on efforts to diminish protection of the Federal Religious Freedom Restoration Act, along with monitoring states that may want to enact similar legislation.

Archbishop Lori concluded by telling the bishops in attendance that with God all things are possible and that prayer is the ultimate source of wisdom, strength and pastoral love in these struggles.