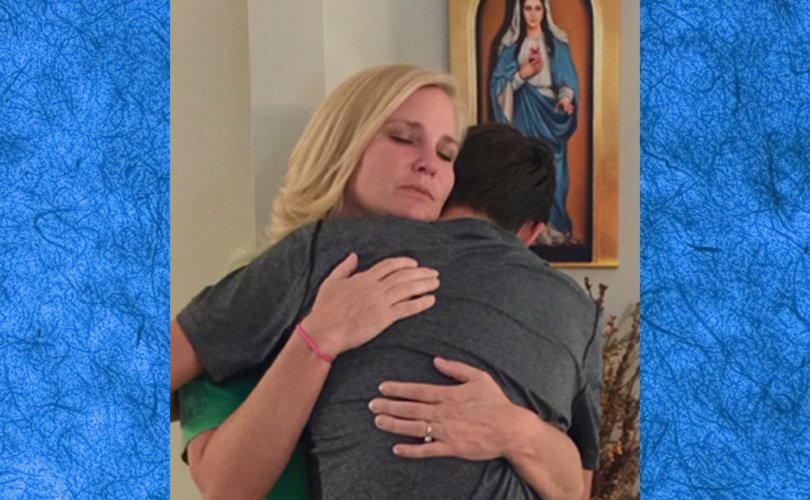 Susan Skinner consoles her son after breaking the school's decision to him.

On September 28, Father Ryan High School president Jim McIntyre told parents Jason and Susan Skinner that because of their opposition to the sex-ed along with their “public airing of your discontent” they could not continue sending their ninth-grade son to school unless they “concluded” their “dissatisfaction.”

“Unless you can assure Father Ryan [HS] that your dissatisfaction with the Human Sexuality curriculum issue is concluded, you are choosing not to allow [your son] to remain a student at Father Ryan High School,” the letter, obtained by LifeSiteNews, stated.

“We remain unsatisfied with the sex education curriculum and the school's refusal to permit opt-outs of the offensive material in accordance with canon law. Further, we will not relinquish or subordinate our inalienable rights to freedom of speech, freedom of thought, and parental primacy at your discretion,” the parents wrote.

“If you wish to compel our son to leave Father Ryan High School as a result of these views, then that is your decision alone — not ours,” they concluded.

“I am just a mother who wanted to protect my son’s innocence for as long as I can.” – Susan Skinner.

The parents criticized the school in their letter for stripping away parental rights “once a child is enrolled in the school.”

“It's disappointing that instead of working with other parents and us to address our concerns, you have chosen to refuse dialogue, deny us explanation, and threaten dismissal because we have engaged in legitimate due process. […] Now, because we have done so, you have decided that our son is no longer welcome at your school,” the parents stated.

School administration responded October 5, telling the Skinners that because they “remain unsatisfied” with the sex-ed, as expressed in their letter, their child was no longer enrolled in the school.

“Therefore, and per our letter dated September 28, 2016, you have chosen to withdraw your son, [name], from Father Ryan High School effective the end of the school day of September 30, 2016,” stated the letter signed by president McIntyre and principal Davis.

Last month, Bishop David Choby of the Catholic Diocese of Nashville paid lip service to parental rights, telling parents who opposed the sex-ed program that while he “wholeheartedly support[s]” their right as “primary educator,” nevertheless, when they send their children to school, they no longer exercise that right when it comes to school “requirements.” If parents wanted their children to graduate, he wrote in a letter, they must observe the school’s “legitimate requirements,” which includes the sex-ed.

But a number of Catholic theologians and canon lawyers, including Fr. Peter Stravinskas, Fr. Gerald Murray, Philip Gray, and Michael Hichborn have defended the parents, saying their right to opt their children out of the sex-ed is categorically backed by the Catholic Church.

The Catholic Church is clear that the rights of parents over their children is “irreplaceable and inalienable and therefore incapable of being entirely delegated to others or usurped by others.” With respect to sex education, the Church specifically calls it the “basic right and duty of parents” that “must always be carried out under their attentive guidance, whether at home or in educational centers chosen and controlled by them.”

Jason Skinner told LifeSiteNews that he was “saddened and disappointed, but not surprised” by the school’s decision to expel his son.

“Given that the school throughout this process has shown no sympathy or regard for our heartfelt conviction that this material would be detrimental to our son, I really am not surprised by their action now,” he said.

“Apparently lack of satisfaction with the curriculum is now grounds for dismissal. In my view, they have  kicked us out without a valid reason,” he added.

Mr. Skinner said the school’s action tells faithful Catholic families that “dissent will not be tolerated.”

“From the beginning, close friends with students already at the school confided to us their concern of retribution, which we have now seen firsthand,” he said.

The Skinners have not only been chastised by community members for causing a disturbance but have been ridiculed as being overprotective and mocked for holding a position at odds with the school and the diocese.

“I am just a mother who wanted to protect my son’s innocence for as long as I can,” Susan Skinner told LifeSiteNews.

“As I look at the world today — and as I pray ardently in adoration — I feel a deep conviction that God is calling us to purity of mind, heart, and body, and our Catholic institutions should support this and not show graphic sexual material in the guise of providing ‘information.’ I would just ask that all of us be kept in prayer, my family, the school, our diocese, and our bishop.  We are deeply saddened by this outcome,” she added.

Mobile users: Click here to view PDF of correspondence between school and parents.

The parents’ fight for their God-given rights over their children has garnered interest overseas.

Dr. Thomas Ward, U.K. founder and president of the National Association of Catholic Families as well as a corresponding member of the Pontifical Academy for Life, told LifeSiteNews even if the school’s sex-ed course were in line with Catholic teaching, it’s treatment of parents is not.

“It’s as plain as the nose on your face that the school’s treatment of the parents, telling them to ‘shut up’ about the sex-ed or ‘get out,’ is in total opposition to all previous papal teaching on parental rights,” he said.

“Put very simply, God gives children to parents (not to bishops, educationalists, sex experts, etc.) for their protection and education. Teachers, doctors, and others only give services to children as the agents of parents, and with their prior and completely informed consent. If these usurp the right of parents over their children, they put themselves in direct opposition to God and his plan for the family.”

Ward called the school’s treatment of the parents an “evil and immoral assault.”

“This must be fought because it is gravely sinful and an attack on parents’ freedom and rights. If we allow parental rights to erode away, we will see more and more children becoming victims of various immoral ideologies and indoctrination programs that are contrary to the truths of our faith. The devastation will be immense. Parents must stop this,” he said.

Alice Grayson, Director of Veil of Innocence — a website exposing the dangers of sex-ed — told LifeSiteNews that parents are right to be concerned when institutions push sex-ed on kids.

“The Church’s enemies know full well that if they want to control the future they first have to separate children from parental influence, desensitize them of their natural modesty, and then insert their own values,” she said.

The Skinners are not the only family targeted by Father Ryan administration for opposing the sex-ed. Another family told LifeSiteNews, under condition of anonymity, that when they sent their child to school, they were excited to read on the school’s website how parents become “partners” with the school in the “formation of your child spiritually, academically and in every other way.”

“We were at first so excited to know that we would be partnering with an amazing Catholic school to educate our child. But the moment we raised our concerns along with other parents about the sex-ed, suddenly the whole idea of ‘partnership’ vanished, and school administration began picking us off, one by one,” the parents said.

“Other parents have paid the price as well for opposing this course. And they too magically ‘disappeared’ from the school and the community. The school finds one reason or another to get rid of you. It’s really a sad situation,” they added.

Petitions (here and here) asking the bishop and school administration to reverse their position and support parental rights have received more than 11,350 signatures as of this writing.