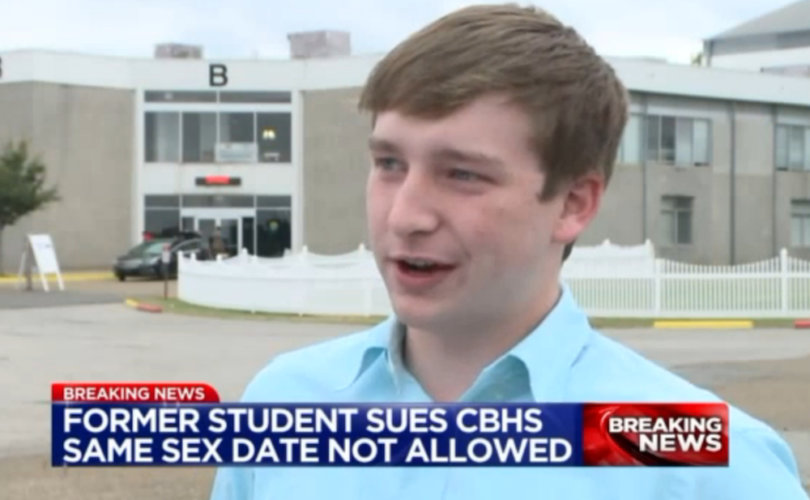 MEMPHIS, Tennessee, September 29, 2016 (LifeSiteNews) — An all-boys Catholic high school in Memphis, Tennessee, is being sued for $1 million by a former student who claims the school caused him “severe injuries and damages” by refusing to allow him to bring his same-sex date to a homecoming dance last year.

The suit, filed Sept. 20 in Circuit Court on behalf of Lance Sanderson, states that Christian Brothers High School (CBHS) caused the teenage boy who identifies as “gay” to “suffer severe injuries and damages which include, but are not limited to disability, past and future emotional distress, past and future medical expenses, and personal care services.”

Sanderson hit the national spotlight last year after going public with the school’s refusal to let him bring his male date. Despite negative media attention as well as a petition on Change.org titled “Let me take my date to homecoming” that was signed by almost 28,000 supporters, the school held fast to its Catholic principles.

The Catholic Church teaches that sexuality as created by God is for the sake of lovingly uniting a man and a woman in marriage to produce offspring. Homosexual acts are called “intrinsically disordered” since they are “contrary to the nature law” in that they “close the sexual act to the gift of life.”

“Under no circumstances can they be approved,” states the Catechism of the Catholic Church. Catholic life and family advocates stress that it is precisely because of love that the Church warns people of the biological and spiritual dangers associated genital activity between two persons of the same sex.

School officials made it clear during that time by means of school-wide announcements that CBHS “adheres to the Catholic and Lasallian traditions,” specifically stating that “for logistical reasons, boys from other schools may not attend” the dance.

Sanderson was eventually suspended from school for unknown reasons and finished his senior year courses at home, upon which he received a CBHS diploma.

Now a college freshman at DePaul University, Sanderson hopes his lawsuit will intimidate Catholic schools across the nation to be more accepting of homosexuality.

The suit comes a little over a year after the Supreme Court overturned male/female marriage, ruling that the U.S. Constitution contains the right for two people of the same-sex to “marry.” Pro-family leaders warned that overturning natural marriage would embolden gay activists to use every legal means at their disposal to stamp voices dissenting from their agenda.