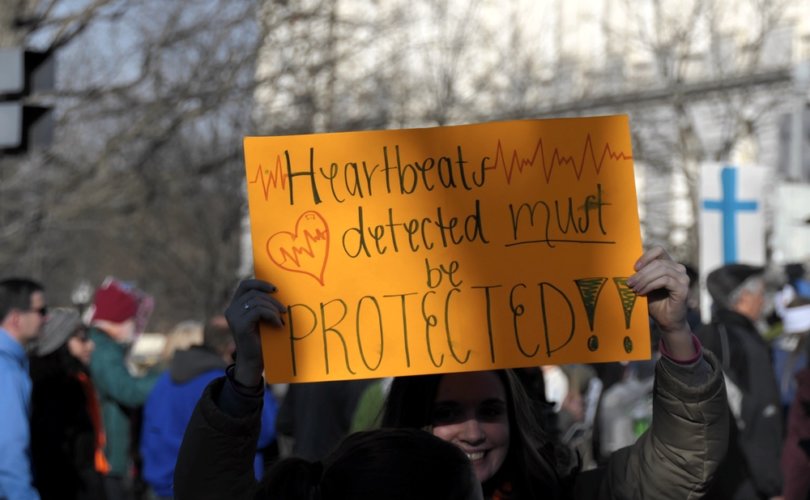 WASHINGTON, D.C., March 27, 2018 (LifeSiteNews) – On March 22, pro-life Rep. Steve King, R-IA, singled out the National Right to Life Committee (NRLC) as the main obstacle to passage of a bill that would ban abortions on babies with beating hearts.

Called the Heartbeat Protection Act, this federal legislation sponsored by King would make it illegal for doctors to commit abortions on babies with detectable heartbeats.

King introduced the bill in the U.S. House on January 12, 2017, but it has been stalled in committee since February of last year and brought to light sour internal divisions within the pro-life movement over what kind of legislation should be supported.

He explained that former House Speaker John Boehner, R-OH, instituted an informal rule that no pro-life legislation could be brought to the House floor unless it had the support of NRLC, the Family Research Council, and the Susan B. Anthony List.

King and the bill’s architect, Janet Porter, say NRLC has been blocking a vote on the Heartbeat Bill for months now. As they tried to get NRLC to endorse the bill in January 2018, other “mainstream” pro-life groups like the March for Life refused to tell LifeSiteNews where they stood on the legislation.

In January, NRLC president Carol Tobias issued a statement declaring her organization “does not oppose” the heartbeat bill and denying that it “blocked congressional consideration of” or “lobbied congressional leadership against” it. “Divisiveness and attacks on fellow pro-lifers does not save babies,” she said.

But King claims that despite NRLC’s insistence, the nation’s largest national pro-life organization has “been working against it” behind the scenes.

Following NRLC’s contention that heartbeat legislation must demonstrate progress in the states before meriting federal attention, King says, he asked pro-life leaders in the Iowa legislature to take up the issue. On February 28, a heartbeat bill passed the Iowa Senate 30-20, but faced resistance in the state House.

There, King says, “the objections coming up sounded strangely like the objections we’ve been hearing here in Washington that have been presented by the National Right to Life.”

The Iowa Catholic Conference, representing the public policy interests of the state’s bishops, was officially “neutral” on the bill, something Planned Parenthood celebrated.

Following the experience in Iowa, King says he dug deeper and found that NRLC’s Ohio affiliate had testified against similar heartbeat legislation back in 2011. He also noted that in December 2016, Ohio Right to Life successfully urged Ohio Gov. John Kasich to veto their state’s most recent heartbeat bill.

In Tennessee this year, a Heartbeat bill in the state legislature floundered. Tennessee Right to Life appeared to lobby against it. In 2017, the group’s president, Brian Harris, testified against the pro-bill when it was in committee. Now, the group has gone from openly arguing against the bill to simply “not opposing” it.

“Though anti-abortion group Tennessee Right to Life opposed the legislation as it was introduced last year, the organization has now reversed its stance,” Tennessean reported. “‘As amended with the reporting requirements and removing the unconstitutional provisions, Tennessee Right to Life does not oppose the bill,’” President Brian Harris wrote in a statement Tuesday.”

We “cannot allow this legislation to pass,” Frances Arthur, Church Outreach Associate of Tennessee Right to Life, wrote in the Tennessee Star on January 31, 2018.

“Filing a lawsuit is the modus operandi of the pro-abortion lobby. In 2015, when the Tennessee General Assembly passed another law requiring the Department of Health to inspect abortion facilities in the state, the owners of these facilities filed another lawsuit,” he wrote. “Three years later, we’re still waiting for a ruling, and some abortion clinics are still uninspected.

“We already know that pro-abortionists will file a lawsuit if the ‘Heartbeat Bill’ passes,” Arthur argued. “Sadly, we already know the ruling, too. Current federal law regarding abortion is clearly outlined in the Roe vs. Wade decision of 1973 – that women have a ‘right’ to an abortion and that no state in the union can pass laws that prohibit it. The closest we have gotten is to prohibit abortion after the age of viability of the baby, at approximately 23-24 weeks of gestation. The best we can do under these circumstances is to regulate the abortion industry.”

“The smartest, most prudent move for the pro-life leader, activist, and legislator regarding the ‘Heartbeat Bill’ is to wait,” he advised.

Those on the “pro-life” side who oppose the Heartbeat Bill argue that legislation directly challenging Roe v. Wade would fail at the Supreme Court. They also say such a Supreme Court failure could provoke a pro-abortion majority to write a radical majority opinion striking down the various incremental abortion restrictions allowed under current precedent.

Many national, well-funded pro-life groups want to focus on passing legislation banning late-term abortion and are redicent to support or advocate for legislation that goes farther than banning abortions at 20 weeks or banning dismemberment abortions.

For example, a number of national pro-life groups were mum when the governor of Mississippi signed into law a bill banning abortions on babies older than 15 weeks. That law, which immediately became tied up in court, makes Mississippi the state with the strongest pro-life laws.

King says that challenging the Supreme Court’s viability standards was his express purpose for writing H.R. 490 in the first place, and that it was “legal malpractice to tell the public that we are defeated at the lower court level, and therefore we can’t achieve an accomplishment of restoring this protection for life which actually is in the Fourteenth Amendment of the Constitution.”

He further noted that if his bill was enacted, it would take at minimum a year and a half to reach the Supreme Court, by which point he expected its composition to be very different.

“I wrote the bill not for the configuration and makeup of this Supreme Court,” King said, but for “the next appointment of the Supreme Court, the one that follows Gorsuch, which means we need to move these things now to get them through that court.” He cited the ages of Justices Ruth Bader Ginsburg and Stephen Steven Breyer (84 and 78, respectively), as well as rumors that 80-year-old Justice Anthony Kennedy intends to retire as early as this summer.

If one is not willing to challenge the Supreme Court on abortion, King declared, “then you also need to be willing to accept the burden of guilt that comes along with accepting a million abortions a year, in perpetuity, in the United States of America.”

King stressed that his frustration with Tobias and NRLC executive director David O’Steen was not personal, and he would welcome the opportunity to discuss their differences in person.

Ultimately, however, he said that pro-life priorities need to be decided by the people rather than powerful national organizations, and that NRLC was acting as a “barrier to protecting lives in America.”