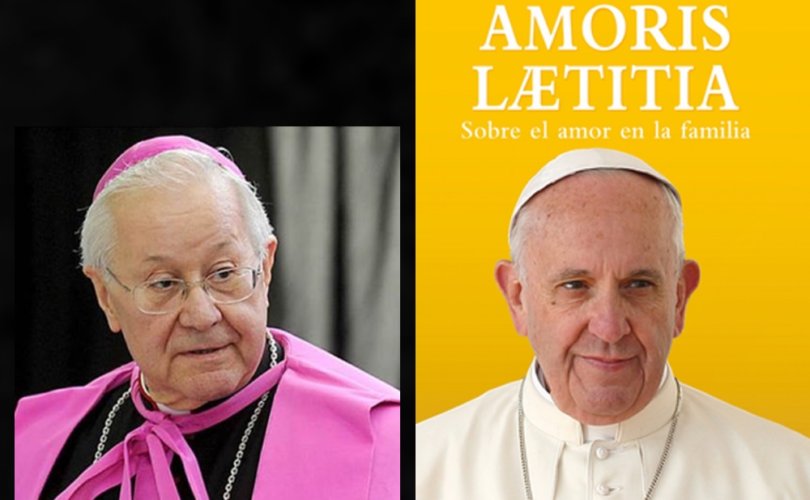 JEFFERSON CITY, Missouri, May 26, 2017 (LifeSiteNews) – A U.S. Catholic diocese has drafted a new policy to allow students who identify as “transgender,” LGBTQ, or live with same-sex couples to attend its schools. The Diocese of Jefferson City, led by Bishop John Gaydos, has cited Pope Francis’ controversial document Amoris Laetitia as guidance for the process.

A draft version of the policy states that administrators in the diocese are “looking carefully and deeply at the question of human sexuality and the development of the human person in the light of students who identify as LGBTQ, students being raised by same-sex parents and those in non-traditional marriage.”

The policy, titled “A Pastoral Process of Accompaniment and Dialogue,” states that a “quote from Amoris Laetitia by Pope Francis guided our work.”

The policy then quotes from the Pope’s Exhortation where he writes about those in “‘irregular’ situations” who need “integration” in the Church as “living members, able to live and grow in the Church and experience her as a mother who welcomes them always.”

The diocese convened a committee last fall to draft the policy.

According to information from a blog compiled by diocesan families who believe the Process is not consistent with Catholic teaching and must be rescinded, no actual pastors from parish schools were consulted in the policy’s crafting.

LifeSiteNews did not hear back by press time on an inquiry to the diocese about various specifics on the drafting and implementation of the diocesan policy.

The diocese presented its new policy to diocesan priests and educators recently. During the presentation, which was overseen by religious sisters from the diocese, a role-play was acted to show educators how to welcome a same-sex couple wanting to enroll their child into a diocesan-run school.

Concerned families within the diocese posted a video online containing audio of the presentation, including the play-acting of a same-sex couple.

The recording also captured a faithful priest (un-named) who strongly objected to the policy, saying that portions of it were contrary to Catholic teachings. At one point, the priest can be heard telling the committee at the meeting that the policy replaces basic Christian morality with situation ethics.

The priest also criticized the policy for embracing gender ideology, something that he pointed out Pope Francis has been the “harshest critic” of.

“And you didn’t just open the door a crack [with this policy],” he said. “It’s wide open, and you’re accepting this [ideology].”

“And like you said, every person is impacted,” the priest continued. “That means you’re scandalizing every child in that school and you’re telling us we have to accept gender ideology. That’s what’s happening.”

The priest went on to argue during the meeting how the policy contravenes Catholic teaching that children fare best in a home with both a mother and father. He gave the example of the Church’s opposition to placing adoptive children with same-sex couples.

The priest equated the policy to Catholic schools giving a nod of approval to abuse.

“We are sitting back while children [in these abusive situations] are being abused,” he said. “We’re standing back planning how to watch it all happen.”

A concerned individual within the diocese told LifeSiteNews under condition of anonymity that the policy demonstrates how ambiguity in Pope Francis’s teaching — and the confusion that results from it — is being exploited to push a radical agenda in Catholic schools.

“The 'Francis Effect' is now beginning to be a battering ram used against faith and sanity even out in the hinterlands of Missouri,” the source told LifeSiteNews.

But during the meeting about the new policy, the presenter told those gathered that the policy reflected the times.

“We are giving you this document because we believe that this is a sign of our times, and we are not exempt from dealing with this situation,” the presenter said.

Concerned parents worry about how the new policy will affect their children already attending Catholic schools within the diocese. They are concerned that by the schools welcoming people who live lives openly contrary to Catholic teaching on marriage, sexuality, and morality, the schools will begin to be places where faithful Catholics who want an authentic Catholic education for their children are no longer welcome.