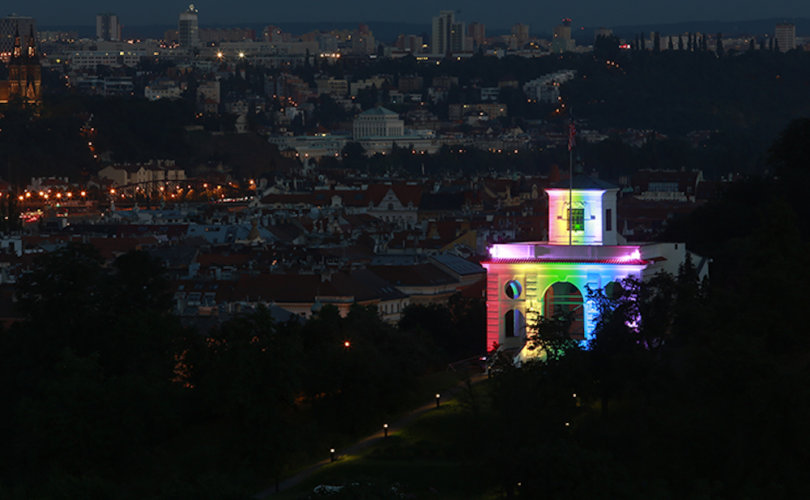 The U.S. Embassy in the Czech Republic lights up in rainbow colors for Prague Pride Week.

The Embassy in Prague, the Czech capital, announced a series of events honoring homosexual-bisexual-transgender “pride week” (August 7-13) on its website and Twitter account, coming alongside the Czech LGBT organization Prague Pride.

On June 26, 2015, President Obama lit up the White House like a “rainbow flag” to mark the Supreme Court's Obergefell ruling imposing homosexuality-based “marriage” on all 50 states.

“The U.S. Embassy in Prague is a proud supporter of the Prague Pride Festival and Pride activities taking place August 7-13 throughout the city,” states the U.S. Embassy in the Czech Republic website. “We stand in solidarity with human rights defenders and civil society organizations working around the country to ensure LGBTI persons live with dignity, respect, and freedom.”

The Prague embassy is just one of several U.S. outposts across the globe that have continued to celebrate homosexual and transgender “rights” despite Trump’s victory, helped along by delays in getting Trump’s ambassadorial nominees through the confirmation process.

Trump’s choice for Ambassador to the Czech Republic, Wisconsin businessman and GOP activist Steve King, recently appeared before the Senate Foreign Relations Committee but was not approved by the committee before the Senate broke for summer recess. Reportedly a “close confidant” of House Speaker Paul Ryan, King would still need to be approved by the full Senate assuming he is approval by the committee.

A Capitol Hill source who works on foreign policy issues told LifeSiteNews that he does not see any problems ahead for King’s nomination, but he said the process moves slowly in Washington.

The U.S. Embassy in the Czech Republic is honoring “pride” in homosexuality and gender confusion (“transgenderism”) by:

— lighting up the Embassy's picturesque “Glorietta [upper tower room] on Petrin Hill” with the “rainbow colors” associated with homosexual advocacy;

— screening the homosexual-themed movie “Moonlight” in the Embassy-affiliated American Center; and

— screening the 2012 documentary, “How to Survive a Plague,” about the AIDS crisis. The film portrays the militant homosexual AIDS protest group ACT UP in a favorable light. ACT UP has a history of demonizing traditional religion, including the Catholic Church (viciously disrupting a mass at St. Patrick's Cathedral in New York City in 1989) with its brazen tactics.

In addition, the Embassy funded an annual Czech “Queer Film Festival,” according to an American living there.

Pro-life Movement CR spokeswoman Zdeňka Rybová issued a statement to LifeSiteNews, saying, “Even though the Embassy of the United States in Prague is no longer headed by Mr. Andrew Schapiro, who actively supported homosexual agenda, the Embassy has given substantial support to this year’s Prague Pride festival. Despite this being not within our primary scope (i.e., pro-life activities), we are very much disturbed by the fact that homosexual lifestyle is being advertised and promoted in the streets of our capital city – moreover in such abhorrent way and under such a scandalous patronage,”

Rybová said, “The character of this event is based on blasphemous amusement and hedonism, same as the whole homosexual lifestyle. We consider the fact, that the U.S. Embassy has offered not only its patronage but also substantial financial support, as an unacceptable interference into the interests of our nation and as an attempt to destroy traditional European values based on Christian principles.”

Rybová added that the diplomatic representatives of the United States “are seen as a disgrace to their country, when they actively and with such vehemence support a lifestyle leading to selfishness, solitude, disease and death. Their conduct goes beyond the limits of diplomatic etiquette. As guests of the Czech Republic, they behave as those who lost the respect to their host country.”

The Czech Republic “needs good and healthy families based on marriage of a man and a woman together bringing up their children,” she said. “A nation that will not comprehend this in time is condemned to extinction.”

No direction from Trump on LGBT

Stephano Gennarini, director of legal studies at the Center for Family & Human Rights (C-Fam), a socially conservative watchdog at the United Nations, told LifesiteNews that the lingering LGBT celebrations by the United States abroad are due to “bureaucratic inertia carrying forward from the Obama administration.”

Gennarini said advancing the LGBT agenda was one of the top priorities of the Obama administration “and one of the only areas where they actually made progress,” from the Left’s perspective.

Thus, regarding the State Department’s continued practice of Obama-style “gay” advocacy despite Trump’s election, he said, “This is what they were told to do.” And State Department bureaucrats will continue to fight to hold on to “Obama’s priorities” until they are forced to change course by Trump and his Secretary of State, Rex Tillerson, he said.

Gennarini said this has occurred on abortion — where the pro-life Trump radically changed course from “pro-choice” Obama — to the extreme delight of pro-life activists.

But not on homosexuality. “Everyone is afraid of the LGBTs and being called a bigot,” he said, speculating that Tillerson, while not necessarily approving of stunts like the Prague “rainbow lights” celebration, made them possible by failing to set a new, clear policy dealing with America’s approach toward the LGBT agenda in other nations.

“Maybe he was … afraid of getting dragged into a battle [the Trump administration] didn’t want to fight,” Gennarini said, adding that State agencies and outposts already sympathetic to liberal, pro-LGBT advocacy will exploit Tillerson’s timidity on those issues for as long as they can.