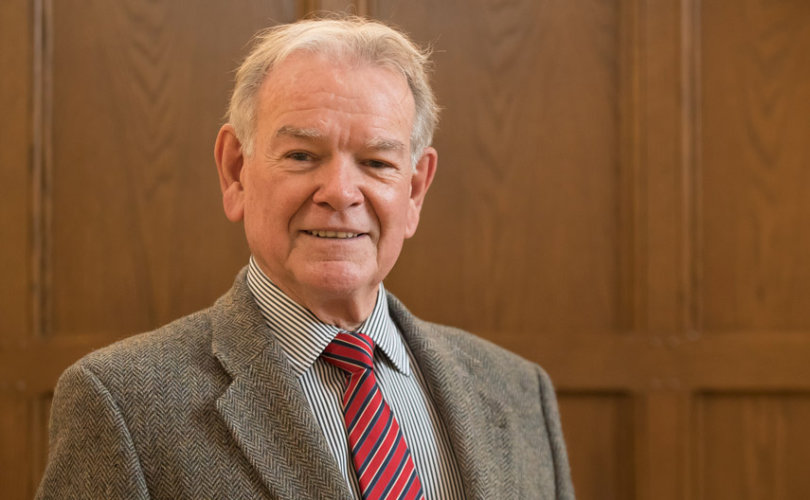 August 14, 2017 (LifeSiteNews) — The U.S. Embassy to the Czech Republic, still awaiting its President Trump-appointed ambassador, featured an exhibit by an American leftist professor who says Trump was elected “to make America white again,” LifeSiteNews has learned.

The Temple University history professor, Ralph Young, specializes in dissent. His work is championed by the “progressive” “resistance” movement opposing Trump. The exhibit, which concluded July 31, was hosted by the Embassy’s American Center and copied pages from Young’s book “Make Art Not War,“ featuring dissent artwork.

The same U.S. Embassy is celebrating Prague “gay pride” this month alongside a Czech LGBT group called Prague Pride, as LifeSiteNews reported. A leading Czech pro-life group denounced the Embassy’s pro-LGBT activities, including lighting up part of the Embassy compound in “rainbow flag” colors, as an “unacceptable interference into the interests of our nation and … an attempt to destroy traditional European values based on Christian principles.”

“Donald Trump is merely the unifying force bringing together all those who have just not been able to accept a black president,” writes Young, who also authored “Dissent: The History of an American Idea.”

The article by Young was first published by the New York University blog “From the Square” and then reprinted by the leftist site Truthout. In an interview last year with Truthout, Young clearly sided with the notion that dissent coming from the Left (including LGBT advocacy) is “good dissent,” as opposed to dissent reacting to liberal advances.

Author: Trump not smart enough to be called ‘racist’

In a phone interview, Young admitted that his claim that Trump’s electoral message was to “make America white again” was a “simplistic kind of statement.” While he conceded that “not everybody” who voted for Trump or supports him now is racist, Young said, “There are a lot of people in favor of Trump who do have racist tendencies.”

Conservatives, including black conservatives like Larry Elder, have long bristled at the liberal penchant to inject racism as a prime motivation for those on the Right, especially during the Obama years. Late last year, Obama himself intimated a “white racist” angle against him in an interview with CNN host Fareed Zakaria.

In his interview with LifeSiteNews, Young managed to work in another insult toward Trump when asked if he was essentially calling the president a racist leader.

“Trump is not a deep enough thinker to be a racist,” he said, adding that Trump will say or do anything to help himself politically.

Trump ambassador not in place

If his nomination is voted out by committee (likely a formality), King, a close ally of House Speaker Paul Ryan, would still need to be approved by the full Senate.

The liberal actions by the U.S. Embassy in Prague appear to be in line with some other Embassies across the globe where the Trump ambassadorial appointments have not yet been approved or taken charge. For example, in June the U.S. Embassy to the Vatican publicly celebrated “LGBT pride.”