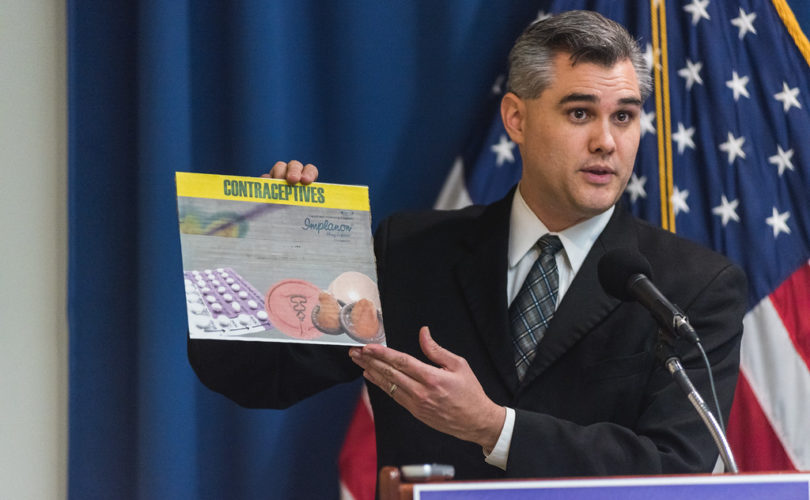 October 18, 2017 (LifeSiteNews) — The U.S. government’s foreign aid development programs are often “a weapon for population control, hidden as a tool to fight poverty,” the organizer of an ongoing international symposium on population control said Tuesday.

And as a U.S. government relief contractor that receives millions of dollars each year in federal aid grants, the U.S. Catholic Church has had a hand in facilitating contraception and population control in developing nations.

Lepanto Institute president Michael Hichborn detailed specifics on the issue Tuesday for some 1,000 conference attendees from across the world for the International Conference on Population Control.

Hichborn was among four presenters for the opening day of the first-of-its-kind symposium running October 17-19 and offering 12 expert presentations in the area of population control online and free of charge to registrants.

In his address, “Foreign Aid as the Engine Behind Population Control,” Hichborn used data straight from the pertinent agencies to demonstrate how U.S. government programs “use foreign assistance and development work as a Trojan horse.”

“You tell people that you’re helping them get out of poverty, and use it as a vehicle to spread contraception and other programs for reducing fertility rates is essentially the goal,” Hichborn said.

The U.S. Congress created the United States Agency for International Development (USAID) through the Foreign Assistance Act of 1961. Since the beginning, Hichborn said, one of the primary goals of USAID was population control, offering chronological examples from throughout the agency’s early years.

“Today, USAID is the largest contraception donor in the entire world,” said Hichborn.

He also presented current data from the USAID website demonstrating its “family planning” goals in the world's poorest countries, and touting how contraceptive use in the 27 countries with the largest USAID-supported programs has increased, resulting in a drop in the number of children per family in those areas.

“There can be absolutely no doubt that USAID is a population-control agency,” said Hichborn, “hiding its activities under the banner of fighting poverty.”

A Catholic tie to USAID

“So the question now is, why, then, does the United States Conference of Catholic Bishops (USCCB) and its own international aid and development organization called Catholic Relief Services (CRS) consistently ask Congress to take Catholic American tax money and use it to supply this population control giant?” he asked.

At least as far back as 2010, both the USCCB and CRS have sent letters to Congress in support of congressional funding for USAID, he said.

He referenced a Lepanto Institute report that showed how the two agencies for which the USCCB and CRS were asking Congress to provide funding – USAID and the President’s Emergency Plan for AIDS Relief (PEPFAR) — promote the use of condoms and artificial contraception.

Further, Hichborn pointed out, the USCCB sent another letter to Congress asking for this same funding just this past March.

“What happening here is the USCCB is lobbying Congress to maintain large amounts of funding for CRS and PEPFAR,” he stated. “They are essentially lobbying for their own paychecks.”

“What this really is about is the USCCB lobbying Congress to maintain large amounts of funding to PEPFAR and USAID so that it’s project, CRS, can continue to receive large government grants,” he said.

Approximately two-thirds of that money comes from grants through the U.S. government like USAID and PEPFAR, he said, and private foundations like the Bill and Melinda Gates Foundation.

This can’t be, they must not know

“When I first started investigating Catholic Relief Services, I was naïve enough to believe that the bishops must not have known about the organizations that CRS was partnering with and giving money to,” Hichborn told conference attendees. “I thought that if I met with the bishop in charge of Catholic Relief Services, he would at least be somewhat shocked by what I had found and would take some action to correct the matter. That was six years ago.”

He then recounted how an eye-opening conversation in 2011 with then-CRS chairman, Tucson Bishop Gerald Kicanas, had Kicanas dismissive of Hichborn’s findings on CRS. This included the relief group providing funding to organizations that were distributing abortifacient contraception, performing sterilizations and committing abortions, and CRS being part of several coalitions that promoted these as well. Further, the bishop wasn’t rattled by mention of CRS’ membership in a coalition promoting something called “safe abortion.”

Hichborn said the exchange was “chilling” and demonstrated an ends-justifies-the-means mentality coming from the USCCB and many of its associations.

A seven-month Lepanto investigation of Catholic Relief Services’ participation in a project in the Democratic Republic of Congo called Project AXxes showed that from 2006 to 2010 CRS was an implementing partner with AXxes, meaning the U.S. bishops’ relief agency was provided funds by the lead organization to implement the overall project in its particular region.

As such, “Catholic Relief Services received units of Depo-Provera, which is an injectable contraceptive,” Hichborn said, “along with Lo Femminal and Overette, which are oral contraceptives, IUDs, and condoms.”

“On other inventory reports,” he added, “we discovered that CRS had received and distributed surgical sterilization kits as well.”

He also recounted how CRS’ own medical coordinator explained in a video interview, while wearing a polo shirt displaying CRS and USAID logos, that the first component of Project AXxes included family planning.

Project AXxes reporting showed that Natural Family Planning programs had been vehicles for other methods of unnatural family planning; something of which Hichborn said CRS was not ignorant.

“There is no way CRS didn’t know what this project intended to do when it agreed to join in,” he said.  “Given the stated intention to incorporate contraception into literally every aspect of the entire project, CRS may as well have partnered up with Planned Parenthood.”

With the international nature of the population control conference, Hichborn also provided data showing that CORDAID, the international aid and development agency of the Catholic bishops of the Netherlands, has promoted contraception and sex education.

“Bear in mind,” Hichborn said, “that Cordaid is supposed to be a Catholic organization run by the Catholic bishops of the Netherlands.”

“Perhaps more disturbing than its own distribution of contraception,” continued Hichborn, citing Cordaid data with specifics spanning several years, “is the fact that Cordaid has partnered with several affiliates of the Catholic Church’s number one public enemy — Planned Parenthood.”

Other Catholic agencies that Hichborn knows of that have been engaged in the spread of contraception or contraception messaging include the Salesian Missions, Development and Peace in Canada, the Catholic Medical Mission Board, and Malteser International.

“The fact of the matter is that the problem is systemic,” Hichborn said. “The more money these Catholic agencies receive from population control groups, and the more they work with them, the more they begin to resemble and emulate them.”

“Our Blessed Lord was very clear when He said that we cannot serve both God and mammon,” he added. “And when you accept money from the devil, you cannot serve God.”