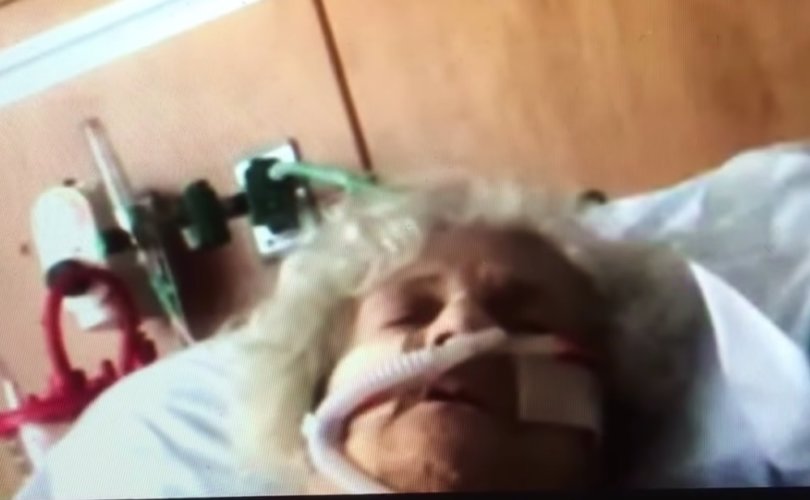 May 2, 2019 (LifeSiteNews) – The 64-year-old woman at reported risk of being euthanized by a Minnesota hospital has received a reprieve after a pro-life legal non-profit intervened on her behalf.

Catie Cassidy is resting comfortably, according to Life Legal Defense Foundation (LLDF), after the hospital agreed to abide by her wishes and those of her healthcare proxy and not remove Catie’s oxygen.

“We received news today that Fairview Hospital in Edina is fully cooperating with Catie’s health care proxy and that they will continue to provide Catie with oxygen as needed,” the Foundation said in a statement.

The hospital received a lot of calls and even visits from people concerned about the case, LLDF Executive Director Alexandra Snyder told LifeSiteNews.

“Thank you so much to all who showed up for Catie by getting the word out and calling the hospital,” Snyder said. “You are amazing!”

LLDF attorneys had sent a demand letter informing the hospital of its duties under Minnesota law after learning the hospital had planned to remove Cassidy’s oxygen on Wednesday morning.

Cassidy is a lung cancer patient, and without supplemental oxygen, she would have suffocated to death.

She had communicated in no uncertain terms in a video that went viral earlier this week that she did not want the hospital to “pull the plug” on her oxygen, and that she wanted to live.

Cassidy recounted on the video how she’d responded “no” and “no way” to the question of the hospital pulling the plug on her oxygen, that she was not done fighting and she wanted to live.

LLDF was contacted about Cassidy’s care by Not Dead Yet, a disability rights group in New York that opposes assisted suicide and euthanasia. The Foundation then heard from the daughter of Cassidy’s healthcare proxy, who provided the video of Cassidy emphatically stating her wish to live.

“Life Legal is pleased that Catie will receive the care she needs and that her wish to fight for her life as long as she can will be honored,” the legal non-profit said in its statement.

Withdrawing Cassidy’s oxygen to cause her death would be active euthanasia, Snyder had said Tuesday, which is illegal in Minnesota and every other state.

The hospital released a statement saying that it does its best to honor the wishes of patients and does not practice euthanasia.

Because of privacy laws, we cannot comment on a specific patient’s medical condition. We can share, however, how we address end-of-life care. End-of-life care is focused on comfort care during the dying process. We communicate closely with the patient or, if they are unable to participate in conversation, with their designated decision-maker if they have one.  We do our best to honor the patient’s known wishes, whether those wishes are to prolong life or to stop treatment.

Euthanasia is illegal in the State of Minnesota, and our health system does not practice it.

It is always our goal to provide medically appropriate and ethical care and comfort to our patients with the utmost dignity and honor.

Snyder expressed confidence that the widespread attention brought to Cassidy’s treatment would be instrumental in ensuring that Cassidy’s wishes to live going forward are respected.

“It is time for us to have a larger conversation about the inherent value of every human life and about our moral obligation to protect those who are most vulnerable,” she remarked.

She said LLDF had heard from people who could not believe that Cassidy could have her oxygen withdrawn, when it would clearly mean ending her life.

“People need to wake up to the fact that this is happening,” Snyder told LifeSiteNews. “And that they need to fight for themselves and for their loved ones.”