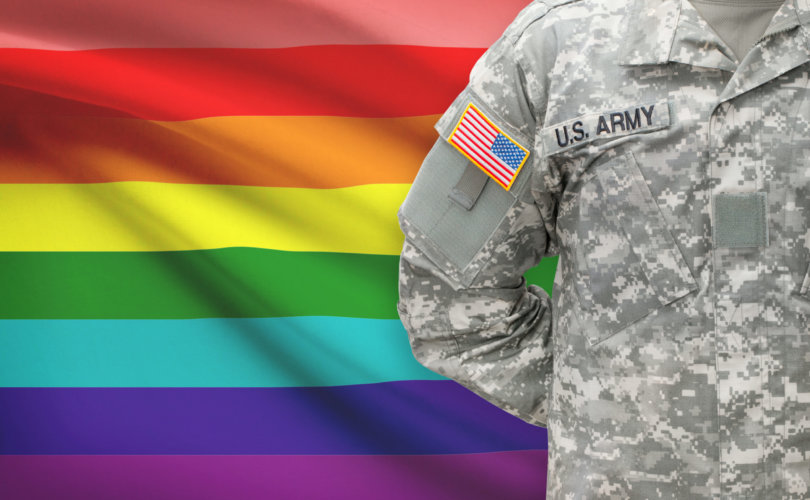 WASHINGTON, D.C., June 28, 2016 (LifeSiteNews) — The U.S. military is expected to announce Friday that it will welcome transgender people into service, according to various news outlets.

Defense Department officials are not allowed to discuss the repeal of the Pentagon's ban on transgender service until final approval is given by Secretary of Defense Ash Carter.  His stamp of approval is expected before the fourth of July, according to USA Today.

CNN reported that the final decision has not been made, and an announcement might come after July 4.

“A senior Pentagon official” told Voice of America News that the Department of Defense “anticipates completing our policy on transgender service members in the coming weeks, no date has been confirmed for the announcement.”

Anonymous leaks reveal that a one-year implementation period will be given to each branch of the armed forces to work out not only the details of transgender troops serving openly but recruiting, housing, uniforms, and other issues.

The lifting of the transgender ban has raised concerns. Rep. Mac Thornberry (R-Texas), who chairs the Armed Services Committee, cited the cost of changing the military's policy toward transgenders in active service.

“To what extent would military barracks, ship berths, gym shower facilities, latrines, and other facilities have to be modified to accommodate personnel in various stages of transition,” Rep. Thornberry asked, “and what would be the projected cost of these modifications?”

Last year, Defense Secretary Carter predicted the ban would be lifted unless transgender people openly serving would create an “adverse impact on military effectiveness and readiness.”

Critics say it would. Rep. Thornberry and others questioned whether an “honest and balanced assessment” could be made in the current political climate in Washington of both transgender troops and troops serving alongside transgender people in terms of “military readiness, morale, and good order and discipline.”

“There are readiness challenges that first must be addressed, such as the extent to which such individuals would be medically non-deployable,” Thornberry said.   “Almost a year has passed with no answer to our questions from Secretary Carter. Our top priority must be war fighting effectiveness and individual readiness is an essential part of that.”

Another concern is the possibility of men and women wanting sex change surgery and entering the military to get it free. The Texas congressman also asked a year ago about medical treatment under the proposed new policy, “including behavioral health treatment, cross-hormone therapy, voice therapy, cosmetic or gender reassignment surgery, and other treatments?”

The New York Times estimated at least 65 transgender personnel would seek surgery each year. A point of contention for the past several months has been requiring transgender recruits to serve for a period of time before they are eligible for the government to pay for sex changes.

Col. Alexander F.C. Webster, a retired U.S. Army chaplain,  told LifeSiteNews, “This latest move by the Obama Administration will probably the last domino in a national cascade toward Fallen Babylon that began with this president abandoning the 'Don't Ask, Don't Tell' policy.”

“The impact of inflicting transgender men and women onto the armed forces is as unpredictable as it is unconscionable, as an official denial of the creative order,” Webster charged. “On a practical level, it will cause havoc and chaos within the armed forces.”

Webster predicts that the Obama Administration will stop at nothing short of requiring all women to register for the military draft.

“Obama will sign legislation that will compel all women between the ages of 18-25 to register with selective service,” Webster said. “This means that in times of war, such as Vietnam, the U.S. will call up women — some of our daughters, even some of our wives — into combat.”

A 2014 report estimated there were 15,450 transgender people in active National Guard and reserve units.

Other military and former military personnel are more resigned to the change.  One retired Air Force chaplain, who spoke to LifeSiteNews on condition of anonymity, said, “Deviant behavior in all forms has its time and place in society. …  For the majority in the military — and I mean the silent majority — social experimentations must be accommodated, if it's by order of the military leaders. Accommodation does not at all times mean acceptance.”